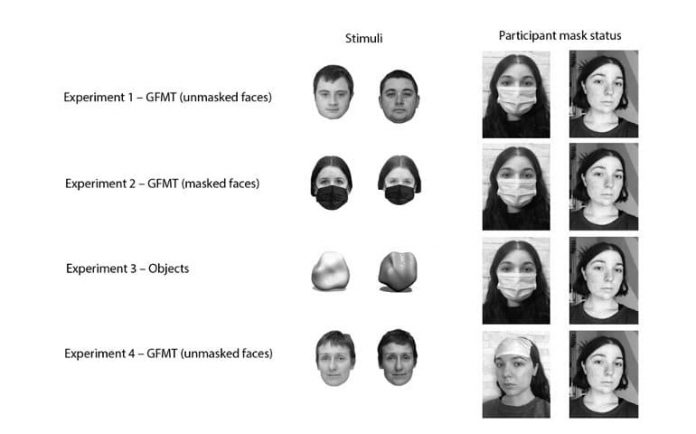 Summary: When you are wearing a face mask, it may be more difficult for you to recognize people, even if they are not wearing masks.

Recognizing someone may be more difficult when you are wearing a face mask—even if the person you are looking at is maskless, according to new research from York University.

Previous research showed that adults and children have difficulty recognizing faces when part of their face is obscured by a mask, such as those worn during the COVID-19 pandemic, and that doesn’t get better with time.

This new series of experiments conducted at York sheds light on how face perception abilities are disrupted for the person wearing a mask, regardless of whether the person they are looking at is masked or unmasked.

So as new omicron subvariants start circulating and people reach for their masks, researchers say they shouldn’t be embarrassed if they start having more difficulty recognizing friends and co-workers again.

“We wanted to investigate the effect of wearing a mask on face perception—something that hasn’t been explored before as far as we know—to see how the perception abilities of a masked observer changes in relation to others,” says Assistant Professor Erez Freud of York’s Faculty of Health, who co-authored the study with York undergraduate students Daniela Di Giammarino and Carmel Camilleri.

As part of the study, there were four different experiments involving 80 participants for each who were shown non-masked and masked faces while they themselves either had a mask on or off.

The results were surprising. Wearing a mask affects the ability to recognize the faces of others. The crucial factor was not whether the presented face had a mask on or not, it was whether the participant had their mask on or off that made the difference.

Freud says one explanation could be that when people wear a mask, they often think others can’t recognize them. “Masked observers might think their own faces are less recognizable and that could lead to reduced face processing abilities. This might have to do with how people view things from other people’s perspectives, a process called alter centric intrusion.”

Another reason, he says, could have to do with the constant tactile stimulation to the lower part of the mask wearer’s face, creating a reminder that people can’t see that part of their face, and it may cause them to have difficulty perceiving that part of others.

The effect, however, only worked when wearing a mask in the typical manner—covering the nose and mouth.

“We also found that the effect of mask wearing on face perception is specific to situations only in which you wear the mask on the distinctive features of the face, such as your nose and mouth,” says Freud.

“When we asked study participants to wear the face mask on their forehead, we did not find any effect of mask wearing on face perception ability.”

In addition, the effect only happens with faces, not objects. When participants were asked to recognize things like an orange, their recognition ability was not affected by wearing a mask.

“I was a bit surprised by the results of this study,” says Freud. “I didn’t think we would find such a robust effect of mask-wearing on face perception abilities, but I guess this is one of the reasons for which we do science.”

Face masks became prevalent across the globe as an efficient tool to stop the spread of COVID-19. A host of studies already demonstrated that masks lead to changes in facial identification and emotional expression processing.

These changes were documented across ages and were consistent even with the increased exposure to masked faces. Notably, mask-wearing also changes the state of the observers in regard to their own bodies and other agents.

Previous research has already demonstrated a plausible association between observers’ states and their perceptual behaviors. Thus, an outstanding question is whether mask-wearing would alter face recognition abilities.

We discuss these results considering the plausible effect of somatosensory stimulation on visual processing as well as the effect of involuntary perspective taking.

Dialectical Behavior Therapy, or: Play by the Rules, Hysteric!

Key to How Exercise Protects Against Consequences of Aging