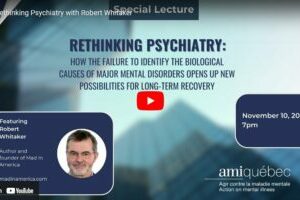 Last week, Robert Whitaker gave a talk at AMI-Quebec (Action on Mental Illness) entitled Rethinking Psychiatry: How the Failure to Identify the Biological Causes of Major Mental Disorders Opens Up New Possibilities for Long-term Recovery. The talk can be viewed below.

An article in the Montreal Gazette ahead of the talk summarized its major points:

“For decades, the prevailing wisdom was that psychiatric illnesses were diseases of the brain — biological disorders caused by chemical imbalances.

That model was a ‘story of people having a chronic condition, something amiss inside your brain, and the best you could do is take drugs long-term, like with diabetes,’ as award-winning American journalist and author Robert Whitaker told the Montreal Gazette — and recovery meant stabilizing within that model of care.

That model has collapsed.

Despite decades of research, there are no findings to show that people with psychiatric illnesses necessarily suffer from a biological abnormality — and, furthermore, there is no evidence that psychiatric drugs have any long-term benefit, said Whitaker, who has written extensively about psychiatry and the history of psychiatry.

The understanding now is that causes of such conditions as depression, psychosis and mania are varied and include life events and setbacks, trauma and other factors — and that many people suffer an ‘episode’ of an illness that resolves over time. This opens new avenues for promoting a robust recovery from psychiatric disorders, he said.

. . . ‘This crumbling of the old disease model leads to this lovely, optimistic, evidence-based story that, so often, specific difficulties can be episodic in nature, not chronic — and so we need a paradigm of care to address that.’