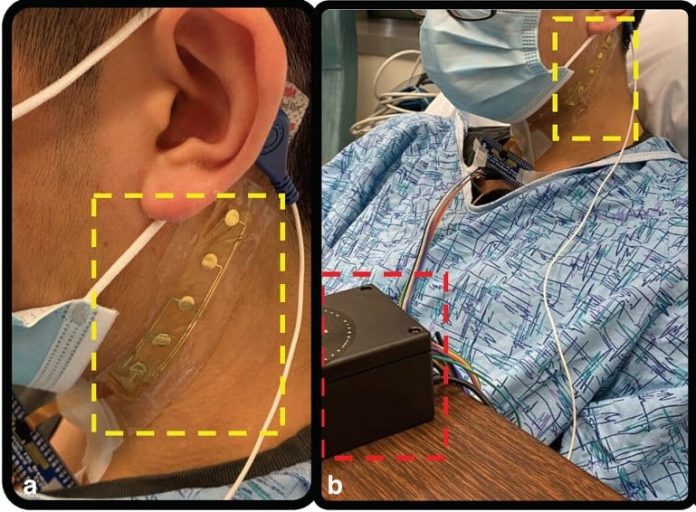 A multi-campus research team has developed a novel device for non-invasively measuring cervical nerve activity in humans. The device, described in an article in Scientific Reports, has potential applications for supporting more personalized treatments for sepsis and mental health conditions such as post-traumatic stress disorder (PTSD).

“With this newly developed device we (for the first time) identified cervical electroneurographic evidence of autonomic (fight or flight vs. rest and digest) biotypes that were remarkably consistent across different challenges to the autonomic or involuntary nervous system,” said the study’s senior author, Imanuel Lerman of UC San Diego’s Qualcomm Institute, School of Medicine, and Jacobs School of Engineering, as well as the VA Center of Excellence for Stress and Mental Health.

The device features a flexible array of electrodes that stretch from the lower front to the upper back of the neck, allowing researchers to capture electrical activity across different nerves. Other features include an integrated user interface for visualizing data in real-time, and a custom algorithm for grouping people according to their nervous systems’ response to stress.

A safer, less invasive way to study the nervous system

In the past, the more reliable ways of measuring nerve activity in the neck called for surgically implanted microelectrodes.

Lerman and Todd Coleman of UC San Diego’s Jacobs School and Stanford University set out to create a less risky and invasive means of monitoring this part of the nervous system by adapting existing technology Coleman had developed with co-author Jonas Kurniawan, now a postdoctoral researcher at Stanford.

The new, flexible array can be worn up to a day and moves easily with the patient’s head and neck movements for longer, painless monitoring.

To explore human autonomic biotypes, or groups of patients whose involuntary nervous systems responded similarly to stress, the researchers ran a series of tests that asked study participants to place and hold their hand in ice water followed by a timed breathing exercise.

The electrode array recorded cervical nerve signaling, termed cervical electroneurography by the team, and heart rate in subjects before and after both the ice water challenge and during the breathing exercise.

Researchers found study participants fell consistently into two distinct biotype groups: those whose neural firing and heart rates increased during both tests, and those who exhibited the opposite trend.

The device’s unique algorithm also offers the chance to identify differences in the response of specific nerve clusters to stressors like the pain induced by the ice water challenge and physical symptoms, including sweating and increases in heart rate, associated with the timed breathing challenge.

“We were pleasantly surprised to observe consistent autonomic response across stress test challenges, i.e., the cold pressor test and the deep breathing challenge. More work is needed to demonstrate our sensor capabilities in larger populations.”

Toward a future of personalized medicine

Although the electrode array cannot identify the exact nerves that fire in response to the stress and pain of the cold water challenge, researchers hope it will someday aid in diagnosing and treating conditions that include PTSD and sepsis. The vagus nerve, for example, triggers inflammation in response to injuries or infection in the body, a mechanism that can become disrupted with PTSD.

Lerman and colleagues hope their new device can someday assist clinicians in measuring patients’ response to therapy for PTSD, such as deep breathing exercises employed during mindfulness meditation, by monitoring neural firing in the vagus nerve.

Already, Lerman is one of a number of researchers using electrical vagus nerve stimulation to test whether stimulating these neural structures can decrease inflammation and pain in people with PTSD.

In a related application, the array may also be used to promote safety in pilots operating military aircraft by detecting flares in nerve activity that prompt dizziness or nausea.

Within hospital settings, the device could help flag patients susceptible to life-threatening conditions like sepsis by identifying people who react strongly to physical stress. Sepsis occurs when the body’s immune system overreacts to an infection, damaging its own tissues in the process.

Mortality risk increases by seven percent every hour. Technology that aids in the detection and flagging of at-risk hospitalized patients would provide physicians with an early notice to administer antibiotics, thus improving a patient’s chances of avoiding or surviving sepsis.

As a next step, the researchers plan to integrate the array with additional hardware for a wireless, wearable sensor that can be deployed outside the laboratory. The researchers are now moving forward with an in-hospital sepsis detection clinical trial.

About this neurotech and PTSD research news

This study introduces a flexible, adhesive-integrated electrode array that was developed to enable non-invasive monitoring of cervical nerve activity.

The device uses silver-silver chloride as the electrode material of choice and combines it with an electrode array consisting of a customized biopotential data acquisition unit and integrated graphical user interface (GUI) for visualization of real-time monitoring.

To demonstrate the capability of the surface electrodes to detect changes in cervical neuronal activity, the cold-pressor test (CPT) and a timed respiratory challenge were employed as stressors to the autonomic nervous system. This sensor system recording, a new technique, was termed Cervical Electroneurography (CEN).

By applying a custom spike sorting algorithm to the electrode measurements, neural activity was classified in two ways: (1) pre-to-post CPT, and (2) during a timed respiratory challenge. Unique to this work: (1) rostral to caudal channel position-specific (cephalad to caudal) firing patterns and (2) cross challenge biotype-specific change in average CEN firing, were observed with both CPT and the timed respiratory challenge.

Does Genetic Predisposition to Alzheimer Disease Contribute to Midlife Depression?