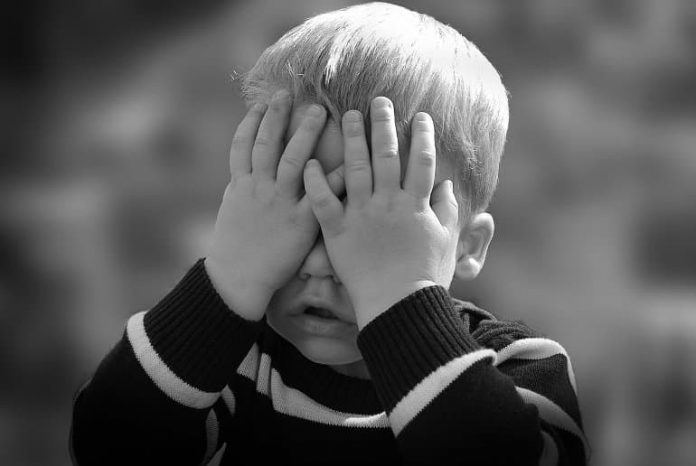 Summary: When it comes to pretend play, infants perform interactional patterns with elements of pretense a lot earlier than previously believed. Researchers say pretend play should be considered an interpersonal feature of cognitive development, and not an end product.

A new study exploring the origins of pretend play suggests infants perform interactional patterns with elements of pretense a lot earlier than thought.

Pretend play is often considered a developmental landmark, being linked to emotion regulation, language skills, cognitive reasoning, and problem-solving. It is widely accepted a child begins participating in make-believe activities when they have developed the capacity to recognise they are doing it and, in most cases, studies focus on infants who are somewhat verbal.

However, new research by the University of Portsmouth and Lund University, Sweden, has drawn connections between pretense and a child’s early on playful interactions, such as clowning and teasing.

Iris Nomikou, from the University of Portsmouth’s Department of Psychology, said: “We often see children using props that stand for something else, like a stick as a sword or a bowl as a hat. But before they become directors of imaginary worlds, they start off small by being actors and performing something unconventional.

“This can be pulling funny facial expressions, making unnatural noises, and even infant acting – like they’re going to do something when they’re not – to get the attention of a parent, caregiver or friend.”

Pretend play is usually defined as an activity with a symbolic character, in which a signifier (e.g. a banana) is used to represent the meaning of a signified (e.g. a telephone). But the paper, published in the Journal of Applied Psycholinguistics, says variations exist in its quality, emergence and developmental progress across different contexts and cultures.

The authors argue that pretence should stop being defined as an end-product of cognitive development, and instead an interpersonal one. Its origins can then be moved to much earlier in infancy than was originally thought possible.

Valentina Fantasia, from the Department of Philosophy and Cognitive Science at Lund University, added: “There is observational evidence of a child as young as eight months old pretending to give an object to someone, then withdrawing it as soon as they reach out.

“Most parents and caregivers have experienced these types of interactions, but still not much attention has been dedicated to investigating their broadest developmental impact or the continuity that exists with pretend play.

“What these earlier and later forms of actions have in common most, is that they are spaces in which infants and children can construct and explore different kinds of realities with meaningful others.”

The study recommends further observation of early form pretence to see how pretend play can be encouraged from a younger age. If more attention is given to the role of early caregiver-infant interactions, from parents reading a book in a character’s voice to playing peek-a-boo, it allows a child to ‘act their part’ from day one of their lives.

About this play and neurodevelopment research news

The Intersubjective Roots of Pretend Play

Pretend play has been studied in great depth in the past four decades, yielding an increasingly rich body of evidence and conjectures about the evolutionary, cognitive, social and linguistic competence acquired by young children through make-believe activities.

In the current work, we drew connections between symbolic play and early forms of infants’ humorous initiatives, such as clowning and teasing, shedding light on the similarities between some of their constitutive aspects.

To do so, we endorsed an intersubjective and socio-cultural stance which allowed expanding our current understanding of, and reflections on the roots of pretend play and its development, from something happening inside individuals to the relation it contributes to create between individuals and their social and cultural environments.

Above all, we suggest that what these earlier and later forms of symbolic actions have in common is mostly their interpretative dimension: they are spaces in which infants and children can construct and explore different kinds of realities with meaningful others.

We then consider the implications for theories of symbol formation and language development.

Why People Deceive Themselves – Neuroscience News

Why do we dream? – MIT McGovern Institute