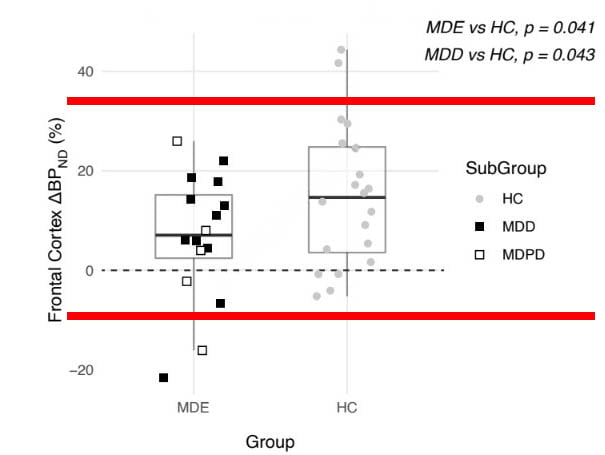 In June, Joanna Moncrieff and others had appeared to put the final dagger into the low serotonin theory of depression (the so-called “chemical imbalance” theory). They reviewed fifty years of research into the theory and found no good evidence to support it. Many prominent psychiatrists even responded by noting that this was nothing new; that hypothesis had been put to bed long ago.

But like a ghost that just won’t disappear, a new study claims to have “clear evidence” that low serotonin is linked to depression. In The Guardian, the lead authors touted the breakthrough nature of their finding:

“This is the first direct evidence that the release of serotonin is blunted in the brains of people with depression,” said Prof Oliver Howes, a consultant psychiatrist based at Imperial College and King’s College London, and a co-author. “People have been debating this question for 60 years, but it’s all been based on indirect measures. So this is a really important step.”

This is a statement, once the study data is analyzed, that can best be described as having been plucked from thin air. Or, in science terms, plucked from a lone data point arising from a depressed patient that stood in contradiction to the rest of the data that failed to find any serotonin abnormalities in the 11 depressed patients. The one outlier is being used to falsely claim that the release of serotonin is blunted in the brains of people with depression, as though that were an abnormality characteristic of the disorder. (If you include five additional depressed patients with Parkinson’s disease, then you can say that the researchers relied on two data points—from a group of 16 depressed patients—to make their false claim.)

The researchers had three hypotheses:

This first hypothesis is the one most relevant to the bottom-line question: do people with depression have lower serotonin levels than people without depression?

To test this, the researchers conducted a PET scan on the brains of people with depression and healthy controls. They determined that both the depression group and the control groups had similar serotonin levels, and both groups were consistent with “healthy” levels, which is what previous studies had found. The authors wrote:

“The regional [serotonin] distribution for both groups was consistent with previous reports for healthy individuals with high binding across cortical areas.”

The researchers then ran a bunch of additional statistical tests on this same data (tests to include other factors, such as age, and then breaking the data down into specific regions and re-running the tests—a controversial statistical process known as p-hacking because it increases the likelihood of finding a statistically significant result by chance). Even after all this, the researchers found that the depression group and the healthy control group continued to have serotonin levels which were no different, except for one slight average difference in one brain region (the temporal cortex). Even in this area, the data shows an almost complete overlap between the two groups.

Conclusion number one: There was no difference in serotonin levels between those with depression and those without. Their first hypothesis was demonstrated to be false.

The second element of the study was a test to see whether a dose of amphetamine, which is known to trigger the release of serotonin, would produce less of a response in depressed patients than in the controls.

The researchers dosed all participants with 0.5 mg/kg of d-amphetamine, and measured how much, on average, each group’s levels of serotonin changed. This was done by measuring serotonin binding potential in the frontal cortex, to estimate serotonin release capacity.

They found a statistically significant effect: on average, the healthy control group’s serotonin levels changed more than the serotonin levels of those with a diagnosis of major depression after being dosed with an amphetamine. This was the result that prompted the researchers to write that their study “provides clear evidence for dysfunctional serotonergic neurotransmission in depression by demonstrating a reduced 5-HT release capacity in patients undergoing a major depressive episode.”

As can be seen, there are two outliers (one black box and one white box), and except for those two, every depressed person’s score, detailing how much their serotonin levels changed, overlaps with a healthy person’s score.

Since Parkinson’s disease is an obvious confounder, there is only one outlier in the depressed group, out of 11.

The researchers, as they reported their results, ignored this fact. Instead, they calculated the mean change in serotonin release scores for the 20 healthy controls and 16 depressed patients, and concluded that there was a slight “statistically significant” difference (p value = .041). Without the one outlier, this statistically significant finding would have vanished.

Such is the data related to hypothesis number two. And here is the relevant conclusion to draw: In 10 of 11 depressed patients without Parkinson’s, their serotonin release scores overlapped with those of the healthy controls, and thus were in a normal range. Four out of five in the Parkinson’s group were within this same normal range.

Thus, their third hypothesis—that serotonin levels or change in serotonin would be related to depression severity—was also proven false.

They write, “We found no relationship between the severity of depression (as assessed by a HAM-D scale) and the magnitude of induced 5-HT release. At this stage we have no explanation for the lack of such relationship.”

The study was published in Biological Psychiatry and was led by David Erritzoe at Imperial College, London. Several other researchers unaffiliated with the study quickly pointed out several flaws in the study, starting with the fact that it was quite tiny, which increases the likelihood that any finding is due to chance. In a Twitter thread, researcher Eiko Fried compared the study to a presidential poll. Would you trust a poll of 37 people (31 male) to estimate who is most likely to win a presidential election? There is a reason polls try to reach a quorum of several thousand and a representative sample of the whole population.

In addition, 14 of the 17 in the depression group—and 17 of the 20 in the health control group—were male. The inclusion of only three women in the depression group (though women are more likely to be diagnosed with depression), the inclusion of five people with Parkinson’s disease (which could create a different neurobiological effect), the inclusion of two people taking a drug for Parkinson’s (which could create larger brain chemistry changes), and the fact that antidepressants had been used by six people in the past (which could have led to long-lasting brain adaptations) are all significant confounding factors.

It is also worth noting that  study was paid for by Imanova Ltd (now Invicro), whose profit is dependent on demonstrating the success of imaging techniques, such as PET, for “drug and diagnostic development.” In an acknowledgment, the researchers express appreciation for the work of the company’s employees “for their excellent technical support.” It is unclear how much input the company had in developing the study, conducting the analysis, and writing the paper.

Here is the conclusion that can be drawn from the data. Two of the three hypotheses failed completely, and while the third hypotheses led to a “statistically significant” finding, individual patient data showed that serotonin release in 10 of 11 depressed patients—those without Parkinson’s disease—was normal. The study confirmed that there was no abnormality in serotonin levels in depressed patients; it confirmed that there was no association between serotonin levels and severity of depression; and it confirmed that serotonin release in response to an injection of amphetamine was normal in all but one patient.

The researchers simply had one data point in their study that fell outside the norm for depressed patients without Parkinson’s disease, and yet they used that data point to claim that their study “provides an invaluable paradigm for the investigation of the pathophysiology and treatment of depressive disorders, and other conditions characterised by disturbed serotonergic neurotransmission.”

Such is how a zombie claim in psychiatric research is raised from the dead.

SARS-CoV-2 May Be Linked to Immune-Mediated Myopathy

The Bear in the Classroom – Trauma-Informed Teacher