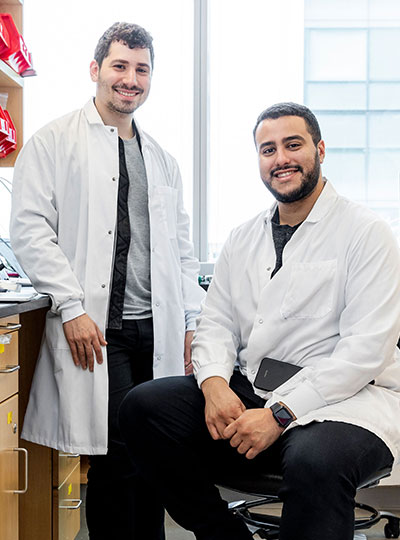 Our growing understanding of the ways bacteria defend themselves against viruses continues to change the way scientists work and offer new opportunities to improve human health. Ancient immune systems known as CRISPR systems have already been widely adopted as powerful genome editing tools, and the CRISPR toolkit is continuing to expand. Now, scientists at MIT’s McGovern Institute have uncovered an unexpected and potentially useful tool that some bacteria use to respond to infection: an RNA-activated protein-cutting enzyme.

The enzyme is part of a CRISPR system discovered last year by McGovern Fellows Omar Abudayyeh and Jonathan Gootenberg. The system, found in bacteria from Tokyo Bay, originally caught their interest because of the precision with which its RNA-activated enzyme cuts RNA. That enzyme, Cas7-11, is considered a promising tool for editing RNA for both research and potential therapeutics. Now, the same researchers have taken a closer look at this bacterial immune system and found that once Cas7-11 has been activated by the right RNA, it also turns on an enzyme that snips apart a particular bacterial protein.

That makes the Cas7-11 system notably more complex than better-studied CRISPR systems, which protect bacteria simply by chopping up the genetic material of an invading virus. “This is a much more elegant and complex signaling mechanism to really defend the bacteria,” Abudayyeh says. A team led by Abudayyeh, Gootenberg, and collaborator Hiroshiri Nishimasu at the University of Tokyo report these findings in the November 3, 2022, issue of the journal Science.

The team’s experiments reveal that in bacteria, activation of the protein-cutting enzyme, known as a protease, triggers a series of events that ultimately slow the organism’s growth. But the components of the CRISPR system can be engineered to achieve different outcomes. Gootenberg and Abudayyeh have already programmed the RNA-activated protease to report on the presence of specific RNAs in mammalian cells. With further adaptations, they say it might one day be used to diagnose or treat disease.

The discovery grew out of the researchers’ curiosity about how bacteria protect themselves from infection using Cas7-11. They knew that the enzyme was capable of cutting viral RNA, but there were hints that something more might be going on. They wondered whether a set of genes that clustered near the Cas7-11 gene might also be involved in the bacteria’s infection response, and when graduate students Cian Schmitt-Ulms and Kaiyi Jiang began experimenting with those proteins, they discovered that they worked with Cas7-11 to execute a surprisingly elaborate response to a target RNA.

One of those proteins was the protease Csx29. In the team’s test tube experiments, Csx29 and Cas7-11 couldn’t cut anything on their own—but in the presence of a target RNA, Cas7-11 switched it on. Even then, when the researchers mixed the protease with Cas7-11 and its RNA target and allowed them to mingle with other proteins, most of the proteins remained intact. But one, a protein called Csx30, was reliably snipped apart by the protein-cutting enzyme.

Their experiments had uncovered an enzyme that cut a specific protein, but only in the presence of its particular target RNA. It was unusual—and potentially useful. “That was when we knew we were onto something,” Abudayyeh says.

As the team continued to explore the system, they found that the Csx29’s RNA-activated cut frees a fragment of Csx30 that then works with other bacterial proteins to execute a key aspect of the bacteria’s response to infection—slowing down growth. “Our growth experiments suggest that the cleavage is modulating the bacteria’s stress response in some way,” Gootenberg says.

The scientists quickly recognized that this RNA-activated protease could have uses beyond its natural role in antiviral defense. They have shown that the system can be adapted so that when the protease cuts Csx30 in the presence of its target RNA, it generates an easy to detect fluorescent signal. Because Cas7-11 can be directed to recognize any target RNA, researchers can program the system to detect and report on any RNA of interest. And even though the original system evolved in bacteria, this RNA sensor works well in mammalian cells.

Gootenberg and Abudayyeh say understanding this surprisingly elaborate CRISPR system opens new possibilities by adding to scientists’ growing toolkit of RNA-guided enzymes. “We’re excited to see how people use these tools and how they innovate on them,” Gootenberg says. It’s easy to imagine both diagnostic and therapeutic applications, they say. For example, an RNA sensor could detect signatures of disease in patient samples or to limit delivery of a potential therapy to specific types of cells, enabling that drug to carry out its work without side effects.