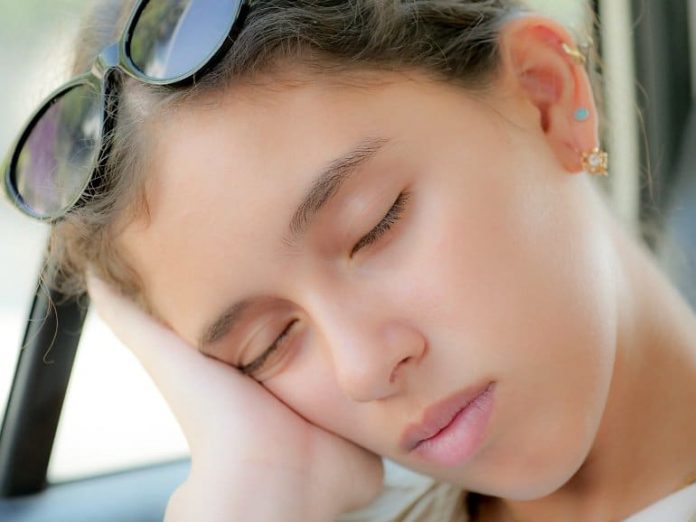 Summary: As the body moves between REM sleep and slow-wave sleep cycles, the hippocampus and neocortex interact to facilitate memory formation.

What role do the stages of sleep play in forming memories?

“We’ve known for a long time that useful learning happens during sleep,” says University of Pennsylvania neuroscientist Anna Schapiro. “You encode new experiences while you’re awake, you go to sleep, and when you wake up your memory has somehow been transformed.”

Yet precisely how new experiences get processed during sleep has remained mostly a mystery. Using a neural network computational model they built, Schapiro, Penn Ph.D. student Dhairyya Singh, and Princeton University’s Kenneth Norman now have new insight into the process.

In research published in the Proceedings of the National Academy of Sciences, they show that as the brain cycles through slow-wave and rapid-eye movement (REM) sleep, which happens about five times a night, the hippocampus teaches the neocortex what it learned, transforming novel, fleeting information into enduring memory.

“This is not just a model of learning in local circuits in the brain. It’s how one brain region can teach another brain region during sleep, a time when there is no guidance from the external world,” says Schapiro, an assistant professor in Penn’s Department of Psychology. “It’s also a proposal for how we learn gracefully over time as our environment changes.”

Broadly, Schapiro studies learning and memory in humans, specifically how people acquire and consolidate new information. She’s long thought that sleep played a part here, something she and her team have been testing in a lab, recording what happens in the brain as participants sleep.

Her team also builds neural network models to simulate learning and memory functions. For this work specifically, Schapiro and colleagues built a neural network model composed of a hippocampus, the brain’s center for new memories, tasked with learning the world’s day-to-day, episodic information, and the neocortex, responsible for facets like language, higher-level cognition, and more permanent memory storage.

During simulated sleep, the researchers can watch and record which simulated neurons fire when in these two areas, then analyze those activity patterns.

The team ran several sleep simulations using a brain-inspired learning algorithm they built. The simulations revealed that during slow-wave sleep, the brain mostly revisits recent incidents and data, guided by the hippocampus, and during REM sleep, it mostly reruns what happened previously, guided by memory storage in the neocortical regions.

“As the two brain regions connect during non-REM sleep, that’s when the hippocampus is actually teaching the neocortex,” says Singh, a second-year doctoral student in Schapiro’s lab. “Then, during the REM phase, the neocortex reactivates and can replay what it already knows,” solidifying the data’s hold in long-term memory.

Alternation between the two sleep stages matters, too, he says. “When the neocortex doesn’t have a chance to replay its own information, we see that the information there gets overwritten. We think you need to have alternating REM and non-REM sleep for strong memory formation to occur.”

The findings are consistent with what’s known in the field, though aspects of the model are still theoretical.

“We still need to test this,” Schapiro says. “One of our next steps will be to run experiments to understand whether REM sleep is truly bringing up old memories and what implications that might have for integrating new information into your existing knowledge.”

Because the current simulations were based on a typical adult getting a healthy night of sleep, they don’t necessarily transfer to other types of adults or less-than-stellar sleep habits.

They also don’t offer insight into what’s happening with children, who require different amounts and types of shut-eye than adults. Schapiro says she sees great potential for her model to answer some of these outstanding questions.

“Having a tool like this allows you to go in many directions, especially because sleep architecture changes across the lifespan and in various disorders, and we can simulate these changes in the model,” she says.

In the long run, better understanding the role of sleep stages in memory could help inform treatments for psychiatric and neurological disorders for which sleep deficits are a symptom. Singh says there could also be implications for deep learning and artificial intelligence.

This proof-of-concept work connecting sleep and memory formation moves the field one step closer to these goals.

About this sleep and memory research news

How do we build up our knowledge of the world over time?

Many theories of memory formation and consolidation have posited that the hippocampus stores new information, then “teaches” this information to the neocortex over time, especially during sleep. But it is unclear, mechanistically, how this actually works—How are these systems able to interact during periods with virtually no environmental input to accomplish useful learning and shifts in representation?

We provide a framework for thinking about this question, with neural network model simulations serving as demonstrations.

The model is composed of hippocampus and neocortical areas, which replay memories and interact with one another completely autonomously during simulated sleep. Oscillations are leveraged to support error-driven learning that leads to useful changes in memory representation and behavior.

We find that alternating between NREM and REM sleep stages, which alternately focuses the model’s replay on recent and remote information, facilitates graceful continual learning.

We thus provide an account of how the hippocampus and neocortex can interact without any external input during sleep to drive useful new cortical learning and to protect old knowledge as new information is integrated.

Internet and Youth suicide: What do we know?

Art, Music, Exercise, and More: What Are the Recommended Doses for Improving Mental Health?