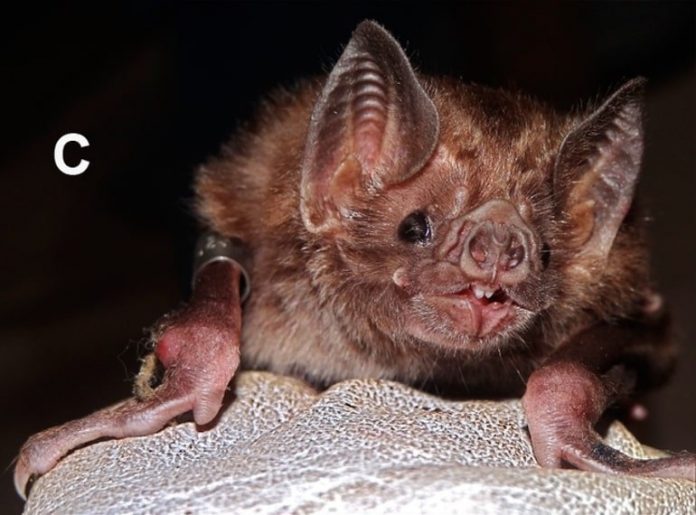 Summary: Male vampire bats infected with rabies socially withdraw, scaling back their social behavior of grooming other bats before they succumb to the disease.

Vampire bats infected with the rabies virus aren’t likely to act stereotypically “rabid,” according to a new study – instead, infected male bats tended to withdraw socially, scaling back on the common habit of grooming each other before they died of the disease.

The study was the first to observe how rabies affects vampire bat social behavior, and one of only a few research efforts to understand how rabies infection impacts behavior in one of the species most responsible for causing rabies outbreaks in humans and livestock in Latin America.

The virus is typically transmitted to other species by direct contact between vampire bats’ infected saliva and the broken skin of the livestock or other animals (and, rarely, humans) they bite to feed on blood.

In the roost, vampire bats might infect each other through the licking and chewing that constitute the grooming behavior they engage in for up to 5% of their active time, said Gerald Carter, senior author of the study and assistant professor of evolution, ecology and organismal biology at The Ohio State University.

“Despite that possibility, no previous studies had tried to quantify changes in grooming habits in vampire bats infected with rabies,” Carter said. “It could be that vampire bats’ tendency to withdraw from social activity when they’re sick that we’ve seen in our earlier work lowers the likelihood for rabies transmission to groupmates despite living in close quarters inside the roost.”

The study was led by co-first authors Sebastian Stockmaier, an Ohio State University President’s Postdoctoral Scholar in Carter’s lab, and Elsa Cárdenas-Canales, then a PhD student and now a postdoctoral scholar in pathobiological sciences at the University of Wisconsin-Madison.

The research was published recently in the journal Biology Letters.

Previous research in a variety of animal species and humans has shown that there are two observed responses to rabies infection: “furious” symptoms of increased aggression, or “paralytic” symptoms that lead to lethargy and paralysis. The furious response is expected to increase transmission to other hosts.

In this work, the researchers equipped a lab with infrared surveillance cameras to observe 40 male common vampire bats that were part of a larger sample of bats used to test a rabies vaccine candidate. Groups of bats subjected to three treatments – oral vaccination, topical vaccination or placebo – were placed together in cages for four months before being challenged with a coyote variant of the rabies virus.

One day after the challenge, the team began quantifying behaviors from three one-hour sample periods each night, recording the absence or presence of either grooming or aggression. The team analyzed the resulting 18,808 behavioral samples to estimate behavior rates.

“We were generally interested in how social behaviors that might be relevant to rabies transmission – allogrooming and aggression – changed when vampire bats were infected,” Stockmaier said.

All bats showed low rates of aggression and, compared to their healthy cagemates, rabid vampire bats showed a reduction over time in giving and receiving grooming. The effect was first seen about 12 days after inoculation with the virus and got stronger closer to when the bats died.

The researchers can’t be sure what caused the decrease in grooming – whether it resulted from a general immune response that made the bats sick and lethargic, and therefore less social, or from dysfunction of the central nervous system from the rabies infection.

Cárdenas-Canales noted that signs of either the aggressive or paralytic forms of rabies are the last to show before the animal dies – suggesting that disease transmission can occur without any obvious changes in behavior.

“In some cases, asymptomatic bats fly, forage and interact normally while having infectious saliva – making every bite, by feeding or fighting, potentially infectious,” she said. “We could learn even more by measuring how often bats in the late stages of disease shed virus in their saliva and get fed by others, and what this might implicate for rabies transmission.”

The results, in male vampire bats, which can be aggressive toward each other, actually raise a question about a common idea regarding rabies infection – that the virus manipulates its host into becoming aggressive to improve the chances for viral transmission.

“Rabies might not have to manipulate the behavior of its host if the host is frequently aggressive anyway or if it is likely to bite other animals to feed,” Stockmaier said. “This remains to be tested.”

Another possible explanation for not observing increased aggression is that the behavioral effects of rabies are highly variable and might differ by the viral strain. The researchers noted that bats infected with variants from other populations or other species did not show clear “furious” rabies in six other cases, but three observational studies did record signs of increased aggression, and these were all in vampire bats that were naturally exposed to rabies in the wild.

Funding: This work was supported by the National Science Foundation, the U.S. Geological Survey, and the Global Health Institute and Institute for Regional and International Studies at UW-Madison.

Carter is an affiliate of the Smithsonian Tropical Research Institute. Additional co-authors include Eleanor Cronin of Ohio State, Tonie Rocke of the U.S. Geological Survey-National Wildlife Health Center and Jorge Osorio of UW-Madison.

About this animal behavior research news

Rabies virus (RABV) transmitted by the common vampire bat (Desmodus rotundus) poses a threat to agricultural development and public health throughout the Neotropics.

The ecology and evolution of rabies host–pathogen dynamics are influenced by two infection-induced behavioural changes. RABV-infected hosts often exhibit increased aggression which facilitates transmission, and rabies also leads to reduced activity and paralysis prior to death.

Although several studies document rabies-induced behavioural changes in rodents and other dead-end hosts, surprisingly few studies have measured these changes in vampire bats, the key natural reservoir throughout Latin America.

Taking advantage of an experiment designed to test an oral rabies vaccine in captive male vampire bats, we quantify for the first time, to our knowledge, how rabies affects allogrooming and aggressive behaviours in this species. Compared to non-rabid vampire bats, rabid individuals reduced their allogrooming prior to death, but we did not detect increases in aggression among bats.

To put our results in context, we review what is known and what remains unclear about behavioural changes of rabid vampire bats.

Seeing How Odor Is Processed in the Brain