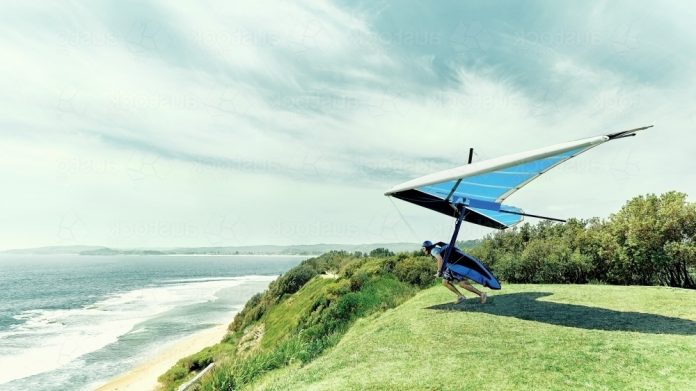 For some people, getting diagnosed with a movement disorder can feel like strapping into a hang glider and stepping off a cliff. It’s that feeling of embarking on a journey or even an adventure, and you don’t know where you’re going or how you’ll get there.

Every hang glider flight ends up the same way — back on the ground. But between the leap off the cliff and the (hopefully smooth) landing, unlimited variables may affect the flight, and an infinite number of outcomes are possible for how it will turn out.

There is no pause button for the pilot to press. Once the flight starts, it won’t come to an end until the glider is back on the ground. The pilot can’t stop the flight to fix any problems or complications. The pilot must overcome every challenge while simultaneously keeping the hang glider in the air.

This same phenomenon is true for movement disorder patients — once their condition starts, they can’t pause or stop it. The patient will have to deal with anything that comes up, whether caused by the disorder or exacerbated by it, all while simultaneously managing their movement disorder diagnosis.

But the similarities between hang gliders and movement disorders don’t end there.

The Hang Glider Itself Is Your Current Health Status

You don’t have to be an experienced pilot to understand that not all hang gliders are built the same way. Some hang gliders are expertly designed, state-of-the-art pieces of equipment, while others might be worse for the wear, barely held together by zip ties and duct tape.

The same thing is true for people with movement disorder — some of us live very healthy lifestyles and are in great shape, while others might have a few health issues. And sometimes, even the healthiest among us can get sick, especially in cases where genetics plays a role in developing a disease.

At the same time, no two movement disorder cases present in the same way. Sometimes, a patient’s symptoms will develop gradually, while other times, the disease can hit with the suddenness and ferocity of a Mack truck.

This hang glider metaphor considers all of these variables — it represents the patient’s current health status on the first day they come into our clinic. The metaphor includes the frequency and severity of their movement disorder symptoms and their underlying health and physical fitness.

The good news is that anyone can improve their overall health, even someone with a movement disorder. When a movement disorder patient starts to make positive changes like eating a healthier diet and exercising more, they’re not just improving their baseline health but also strengthening their body’s ability to manage their movement disorder symptoms effectively. This is why our approach to successfully treating movement disorders includes so much more than just medications and procedures.

The bottom line is that healthier people make better patients — the better their underlying health, the better they can manage their condition.

And when it comes to improving your overall health, it’s never too late to start.

The truth is that all of us are on a gradual descent back toward earth. After all, none of us will live forever, just like no hang glider flight will last forever. Sooner or later, we all end up back on the ground.

One of the cruelest aspects of many movement disorders is that they’re progressive — that is, the symptoms associated with the condition tend to get worse over time. When someone receives a movement disorder diagnosis, it can feel like they’ve just been told to get ready for a bumpy flight that’s only going to get worse as it goes on.

When we can work with a patient to achieve these objectives, we help them reach the overall goal of living their lives to the fullest and enjoying the best quality of life possible.

The Treatment We Provide Is the Wind Beneath Your Wing

The hang glider pilot uses the wind to soar to greater and greater heights and stay in the air for a long flight. And that’s what we’re trying to be for our movement disorder patients at Neurology Solutions. Our team of healthcare providers and the treatments we provide are the wind powering our patients to greater heights, longer flights, and a better quality of life.

And at the same time, we’re going to put you in a better position to harness that wind (by helping you become healthier overall), and we’re going to help you find the smoothest air to fly through (by recommending the appropriate medications and/or procedures at the right time).

We have learned much from treating thousands of movement disorder patients over the last two decades. And we know that the best patients are the ones who grab hold of that glider with both hands and actively fly it, aiming to go as high and as long as they possibly can.

“Do You See What I See?” Study Shows Cross-Cultural Variation in Maternal Focus During...