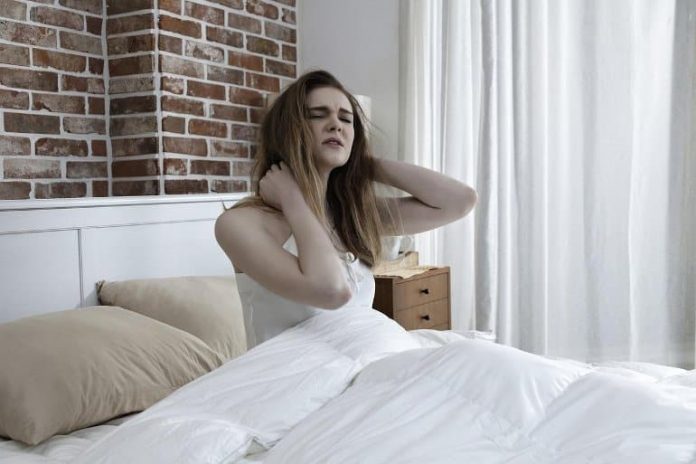 Summary: People who indulge in heavy alcohol consumption and who suffer from insomnia may be less likely to suffer from alcohol-induced blackouts, a new study reports.

Heavy drinkers with symptoms of insomnia, such as difficulty falling or staying asleep, may be less likely to suffer alcohol-induced blackouts, according to a study co-authored by a Rutgers researcher.

It’s the opposite of what they expected when they began the study. Historically, research has suggested that insomnia worsens alcohol-related consequences.

“Because insomnia has been shown to impair memory and cognitive functioning, we thought that participants in our study with severe insomnia and high rates of alcohol use would also have the highest rates of blackout frequency,” said Angelo M. DiBello, an assistant professor at the Rutgers Center of Alcohol and Substance Use Studies within the Graduate School of Applied and Professional Psychology and a coauthor of the study published in the journal Addictive Behaviors. “What we found was exactly the opposite.”

To measure alcohol-induced anterograde amnesia – commonly referred to as a blackout – among young adults, DiBello and colleagues from the University of Missouri (first author Mary Beth Miller) and the University of New Mexico (shared first author Cassandra L. Boness) used data collected from 461 college students from an introductory psychology course at a large Midwestern university.

Eligible participants were at least 18 years old and had reported heavy drinking in the past 30 days – defined as five or more drinks on a single occasion or 14 or more drinks a week for men and more than four and seven drinks, respectively, for women.

Participants were asked about their drinking habits, whether and how often they experienced alcohol-induced blackouts and if they suffered symptoms of insomnia. About a third – 146 – met the criteria for insomnia.

DiBello said more work is needed to understand results that “are contrary to much of the established literature.”

But the researchers already have a theory that they plan to test.

One potential explanation is that circadian misalignment, which is common among individuals with insomnia, alters the elimination process of alcohol metabolism, the researchers wrote. Many of the enzymes involved in alcohol metabolism demonstrate time-of-day-dependent variations in activity. If circadian misalignment alters the activity of these enzymes, then it may alter the rate at which alcohol is eliminated from the body.

“We’re not saying that the consequences of heavy drinking are absent for those with severe insomnia,” DiBello said. “This is not a license to drink heavily if you have trouble sleeping.”

“What we are saying, however, is the effect is stronger for those who are low in insomnia,” he said. “But of course, people who are high in insomnia who drink a lot still experience elevated blackout frequency compared to those who drink less.”

About this insomnia and alcohol research news

Insomnia as a moderator of alcohol use and blackout: Potential role in acute physiological consequences

Alcohol-induced blackout is associated concurrently and prospectively with alcohol-related harm, including emergency room visits and sexual coercion. Although sleep has not been linked empirically to blackout, symptoms of insomnia have also been linked to memory impairment, in which case insomnia symptoms may compound alcohol’s negative effects on memory. This study tested insomnia symptoms as a moderator of the association between heavy drinking and alcohol-induced blackout.

Symptoms of insomnia are associated with alcohol-related harm, but may buffer associations between drinking and acute physiological consequences of alcohol. Additional research is needed to determine if alcohol heightens sensitivity to the acute physiological effects of alcohol, in which case less alcohol may be required for young adults with insomnia to experience these effects.