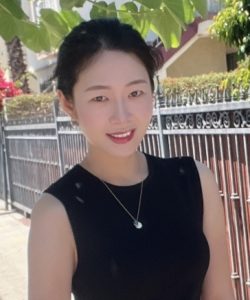 Kyoungeun Lee’s research to understand memory in aging adults began in an unlikely place: robots. While working on a large-scale project to develop a compatible artificial intelligence-driven robot for older adults, she was struck by the number of participants who were concerned about their memory declining. “I was able to vividly observe their fears about memory decline,” she recalls.

That experience led her to pursue PhD work in Audrey Duarte’s Memory and Aging lab at the University of Texas, Austin, where she has been investigating  why older adults have more difficulty resolving competition between relevant and irrelevant memories. In new work published in the Journal of Cognitive Neuroscience, Lee and colleagues used Encoding-Retrieval Similarity (ERS) analysis – which measures the similarity of neural patterns during encoding and retrieval –  to better understand how young and older adults process memories.

We spoke with Lee more about the study and its implications, including what is next for the work.

CNS: What major insights were you seeking with this study?

Lee: It has been suggested that older adults’ memory is more susceptible to the interference from previous but irrelevant memory, which is known as a “proactive interference.” However, to fully understand how young and older adults’ memories are impacted by intrusion of previous memories, it is important to measure the degree of memory competition between irrelevant (old) and relevant (new) memories. So far, however, because of the methodological limitation, it has been hard to examine which memories are coming to one’s mind and how they compete with each other. In this study, we aimed to find more direct neural evidence of memory competition between old and new memories across young and older adults by utilizing multivariate pattern analysis with EEG data.

CNS: What exactly is ERS analysis?

Lee: According to neurobiological models of memory, a portion of the brain activity during learning (i.e., encoding) is “reactivated” when we are trying to remember it (i.e., retrieval). The degree of reactivation is believed to support our memory performance. For example, when you meet someone new, your brain initially processes his/her face, generating a specific neural pattern. And when you are trying to remember his/her face later, a similar neural pattern might be recapitulated, leading to a successful retrieval of the face. Based on this notion, Encoding-Retrieval Similarity (ERS) analysis is measuring similarity of neural patterns during encoding and retrieval, in order to estimate how much the encoded information is reinstated during the retrieval. Thus, greater ERS can be interpreted as neural evidence of memory reinstatement of the encoded information. In this study, we utilized ERS to estimate the level of reinstatement of old and new memories in young and older adults.

CNS: Can you give an example of “proactive interference”? What do you mean by that?

Lee: Proactive interference means your old, previous memories compete with learning and remembering of new ones, especially when they share overlapping features with each. This occurs quite often in our everyday lives. For example, I have to change my university password every 3 months. Especially after I’ve just changed it, I often enter the old one. Another embarrassing example is when we accidentally call our new partner by an ex’s name. Some cognitive aging work suggests that these kinds of memory errors happen more as we age.

Lee: First of all, we were excited to find direct neural evidence that the reinstatement of old memories contributes to memory errors across young and older adults, and the magnitude of lure — old, but irrelevant, memory — reinstatement was greater in younger than older adults. Given that older adults more frequently selected the lure memories during retrieval, this finding might seem counterintuitive. However, this result points to the distinction between the ‘frequency’ of mnemonic intrusions and the ‘magnitude’ of reinstatement of intrusive memories. That is, although older adults made more memory intrusions, the fidelity of the interfering memories may be lower than it is for younger adults.

Lee: Based on the findings of this study, I’ve been more interested in finding factors that potentially contribute to older adults’ overall reduced memory fidelity. Specifically, my new project is focused on the utilization of inner body signals (interoceptive signals) during encoding to better understand the age-related changes in memory fidelity. It has been proposed that we may use our bodily signal as a contextual memory cue, but older adults are known to be less likely to use it. Thus, I want to examine if this age-related changes in utilizing bodily cues can contribute to older adults’ lowered memory fidelity.