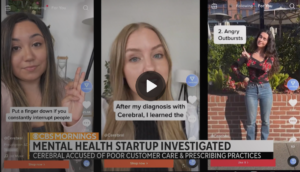 The startup ‘treats’ people for ‘conditions’ such as depression and ADHD, and is the largest online ‘mental health care provider’ in the world.

But last month, the U.S. Department of Justice launched an investigation into Cerebral’s prescribing practices.

Mou, the company’s president and chief medical officer, said Cerebral is cooperating, and that he’s ‘confident’ the DOJ investigation won’t find any problems. The company, formed in 2020, exploded during the pandemic, thanks to relaxed prescribing regulations and high demand for virtual ‘care.’ By the end of 2021, they were valued at $4.8 billion, and had signed Olympic gymnast Simone Biles as its chief impact officer.

Meanwhile, a CBS News investigation found that some users have had problems with Cerebral’s quality of care.

Twenty-eight-year-old Rachael Costar believes Cerebral failed her during her time of need. She developed severe anxiety after the birth of her second child, and had seen ads on social media for Cerebral that offered affordable ‘mental health services’ online.

‘Every time I needed her help, she was never available,’ said Costar.

After six days of no response, Costar said she started the medication she was prescribed but soon broke out in a rash—a potential side effect for which the drug’s maker advises patients to contact their doctors immediately if experienced. Costar contacted Cerebral to help her try to reach her prescriber—with no luck.

‘I messaged back letting them know it was spreading and getting worse. And they said that they were still trying to get a hold of that prescriber,’ she recalled.

She finally went to the emergency room, where doctors treated her with IV steroids and told her to stop taking the medication. She then canceled her Cerebral membership.

‘They make it seem like they wanna help. And then they get you and they’re gone,’ said Costar.”

When Homosexuality Was a “Disease”: My Story of Abuse

Study helps explain why motivation to learn declines with age