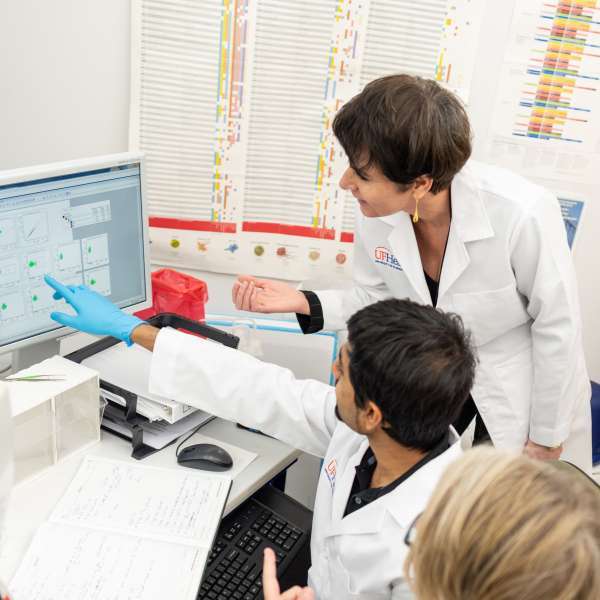 New research by University of Florida neuroscientists shows there are alterations in the expression of two specific proteins in blood immune cells of patients with Parkinson’s disease, a finding that could be key in the quest to develop a simple, inexpensive screening test for the neurodegenerative condition. The study was published today in the journal npj Parkinson’s Disease, a Nature Portfolio journal.

The research team tested blood samples of patients with Parkinson’s disease both before the start of medical treatment as well as during treatment with dopamine medications, and they also tested samples from healthy controls and patients with Alzheimer’s disease as a control group. The testing revealed that peripheral immune cells, or those outside the brain, of Parkinson’s patients showed dysregulated expression of the proteins dopamine transporter (DAT) and tyrosine hydroxylase (TH), the researchers reported.

The new study is the latest in a line of research by UF neuroscientist Habibeh Khoshbouei, Pharm.D., Ph.D., to develop a simple global biomarker for early diagnosis of Parkinson’s disease. Currently, Parkinson’s disease remains a clinical diagnosis. A test called a DaTscan, which involves injecting a small amount of a radioactive drug, may be used to reveal a loss of dopamine-containing neurons, although the test is not specific to Parkinson’s disease. In the past, a Parkinson’s diagnosis was confirmed after death by showing a loss of DAT and TH in the brain.

“The fact that dopamine transporter is in the periphery further reinforces the notion that Parkinson’s is more than a brain disease,” said study co-author Michael Okun, M.D., executive director of the Norman Fixel Institute for Neurological Diseases at UF Health. “It’s a disease that affects almost all of the major body systems and is among the most complex diseases in clinical medicine. This study adds another layer of understanding that could be useful to developing the next generation of treatments for Parkinson’s.”

The study builds upon the recent development by Khoshbouei’s lab of a new assay, or test, to detect tiny amounts of TH in blood immune cells of Parkinson’s patients. In that study, researchers reported observing that monocytes, a type of white blood cell, of people with Parkinson’s expressed significantly higher amounts of TH per monocyte than those of healthy controls; one notable limitation in that study was the data represented TH levels only at a single point in time.

Their newest discovery was a collaboration between Okun, chair of UF neurology and national medical advisor for the Parkinson’s Foundation; Khoshbouei; graduate research assistant Adithya Gopinath; UF neurologist Adolfo Ramirez-Zamora; and a team of researchers at UF, the University of South Carolina, Carnegie Mellon University and Imperial College of London.

“This is a remarkable discovery that could help with our understanding of the mechanisms of the disease and might also offer a novel, simple, accurate and accessible test for Parkinson’s,” Ramirez-Zamora said. “Future work from our team aims to better understand the changes of these proteins over time and their relationship with genetic factors, medications and advanced therapies like deep brain stimulation.”

Among their key findings: There were increases in blood immune cells containing DAT and TH in the samples from patients with Parkinson’s, a change the investigators linked to a loss of dopamine in the central nervous system that is characteristic of the disease.

The team also reported reproducing the findings in two mouse models of Parkinson’s.

Overall, the authors wrote, their findings support the interpretation that reductions of dopamine in the central nervous system affect peripheral immunity and the expression of DAT and TH in peripheral immune cells.

Khoshbouei said the study provides hope for earlier diagnosis for those at risk of developing the disabling disease.

“In collaboration with clinicians at the Norman Fixel Institute, we developed a simple and sensitive blood test that we hope to use for Parkinson’s diagnosis and potentially for the monitoring of Parkinson’s progression,” Khoshbouei said.

“This has the potential to be a paradigm-shifting discovery in enlightening the brain-to-immune system connections,” she said. “It is remarkable that changes in the brain of Parkinson’s patients can be monitored in the blood. Since there is no cure for Parkinson’s, we anticipate that this study will play a potential role in the development of new treatments and insights into Parkinson’s.”