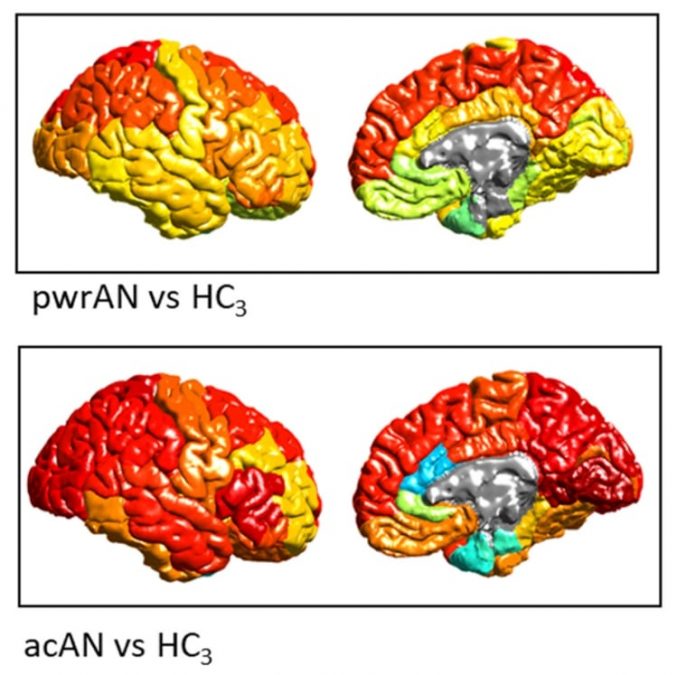 Summary: Neuroimaging study reveals those with anorexia have noticeable reductions in cortical thickness, subcortical volume, and cortical surface area. The reductions are between 2 to 4 times larger than abnormalities in brain size and shape in those with other mental illnesses.

Eating disorders are often misunderstood as lifestyle choices gone awry or oversimplified as the unfortunate result of societal pressures. These misconceptions obscure the fact that eating disorders are serious and potentially fatal mental illnesses that can be treated effectively with early intervention.

Mortality rates for people with eating disorders are high compared to other mental illnesses, particularly for those with anorexia nervosa, a condition characterized by a severe restriction of food intake and an abnormally low body weight.

Now, a groundbreaking new study by a global team of researchers led by the Keck School of Medicine of USC’s Mark and Mary Stevens Neuroimaging and Informatics Institute (Stevens INI)  has revealed that individuals with anorexia demonstrate notable reductions in three critical measures of the brain: cortical thickness, subcortical volumes, and cortical surface area.

These reductions are between two and four times larger than the abnormalities in brain size and shape of individuals with other mental illnesses.

Reductions in brain size are particularly concerning, as they may imply the destruction of brain cells or the connections between them.

Equipped with these results, the research team is calling attention to the pressing need for prompt treatment to help people with anorexia avoid long-term, structural brain changes, which could lead to a variety of additional medical issues.

Anorexia can be successfully treated with healthy weight gain and cognitive behavioral therapy. Ongoing work by the same group shows that successful treatment can have a positive impact on brain structure.

“This implies that early treatment and support can help the brain to repair itself.”

In addition to researchers from the Stevens INI, the research team includes neuroscientists from the Technical University in Dresden, Germany; the Icahn School of Medicine at Mount Sinai, New York; University of Bath, UK; and King’s College London.

The researchers came together under the ENIGMA Eating Disorders working group (ENIGMA-ED), a part of the ENIGMA Consortium, co-founded and led by Thompson. ENIGMA is an international effort to bring together researchers in imaging genomics, neurology, and psychiatry, to understand the link between brain structure, function and mental health.

Through advances in neuroimaging, researchers are gaining a better understanding of the link between serious mental health disorders and brain abnormalities. By demonstrating the effects of anorexia on brain structure, ENIGMA-ED has underscored the severity of the condition and the need for early intervention, while paving the way for the development of more effective treatments.

“The international scale of this work is extraordinary. Because scientists from twenty-two centers worldwide pooled their brain scans together, we were able to create the most detailed picture to date of how anorexia affects the brain, “says Thompson, professor of ophthalmology, neurology, psychiatry and the behavioral sciences, radiology, pediatrics and engineering.

“The brain changes in anorexia were more severe than in any other psychiatric condition we have studied. Effects of treatments and interventions can now be evaluated, using these new brain maps as a reference.”

“This study exemplifies why the work at the Stevens INI is so essential,” says INI Director and longtime colleague of Thompson, Arthur W. Toga, PhD.

“The goal of the ENIGMA Consortium is to bring researchers together from around the world so that we can combine existing data samples and really improve our power to examine the brain and detect the subtle brain alterations associated with a given illness.

“At the Stevens INI we apply this goal to all our large-scale studies. We are committed to participating in large studies with diverse research cohorts and sharing data to advance the entire scientific community.”

About this anorexia research news

The pattern of structural brain abnormalities in anorexia nervosa (AN) is still not well understood. While several studies report substantial deficits in grey matter volume and cortical thickness in acutely underweight patients, others find no differences, or even increases in patients compared with healthy controls. Recent weight regain before scanning may explain some of this heterogeneity. To clarify the extent, magnitude, and dependencies of grey matter changes in AN, we conducted a prospective, coordinated meta-analysis of multicenter neuroimaging data.

We analyzed T1-weighted structural MRI scans assessed with standardized methods from 685 female AN patients and 963 female healthy controls across 22 sites worldwide. In addition to a case-control comparison, we conducted a three-group analysis comparing healthy controls to acutely underweight AN patients (n = 466), and to those in treatment and partially weight-restored (n = 251).

In AN, reductions in cortical thickness, subcortical volumes, and, to a lesser extent, cortical surface area, were sizable (Cohen’s d up to 0.95), widespread and co-localized with hub regions. Highlighting the effects of undernutrition, these deficits associated with lower BMI in the AN sample and were less pronounced in partially weight-restored patients.

The effect sizes observed for cortical thickness deficits in acute AN are the largest of any psychiatric disorder investigated in the ENIGMA consortium to date. These results confirm the importance of considering weight loss and renutrition in biomedical research on AN and underscore the importance of treatment engagement to prevent potentially long-lasting structural brain changes in this population.

Older Adults May Be Better at Listening in Noisy Social Settings Than Has Long...