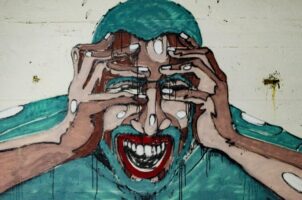 From Medium/Markham Heid: “Nothing burns itself into memory quite like public humiliation. Even now, 20 years later, I can vividly recall the embarrassment I felt the day I tried — and epically failed — to play the guitar in front of my high-school classmates.

It was my junior year. A couple of friends and I were giving a presentation to our Western Civ class, and my part included playing the intro to Led Zeppelin’s ‘Over the Hills and Far Away’ — a riff I’d mastered and had played countless times at home. But performing it in a quiet classroom, watched by my teacher and two dozen peers, proved too much for me. My hands trembled and my fingers seized up. I ‘played’ some unrecognizable mush and turned fire-hydrant red.

I still think about that day every time I have to appear in front of an audience, which fortunately isn’t often. I’ve improved with practice, but public speaking still makes me sweat and messes with my sleep. It wasn’t until recently that I learned, to my surprise, that I may have a ‘mental illness.’

According to the latest Diagnostic and Statistical Manual of Mental Disorders — a.k.a., the DSM-5, which mental health professionals use to identify and diagnose ‘disorders’ — I meet all of the principal criteria for social anxiety disorder (SAD). I experience a ‘marked fear of one or more situations’ where I’m exposed to scrutiny by others. The DSM-5 explicitly includes ‘performance situations’ in that group, and prescription drugs (primarily SSRIs) are considered a first-line treatment for my condition.

I’m not making light of stage fright; I know firsthand how rough it can be. But it’s difficult for me to make sense of its DSM inclusion. Researchers have found that one-third of the general population feels ‘excessive anxiety’ when speaking in front of an audience. Some surveys have found that a fear of public speaking is even more prevalent than a fear of death, and evolutionary psychologists have proposed that this fear is so old and widespread that it must have some utility for our species. How can such an ordinary and natural human experience be a disorder?

Some experts say it’s not. They argue that labeling stage fright a disorder is an example of a broader movement to shunt any and all unpleasant or uncomfortable feelings (shyness, sadness, worry, fear, even grief) into illness categories. This ‘psychiatrization of society,’ some academics contend, is leading to overdiagnosis and overtreatment, and it’s an open secret that this trend is partly engineered and funded by the pharmaceutical industry.

Many people right now are struggling. I think it’s worth asking whether branding them ‘disordered’ and giving them a drug is the best way to help them get better.”