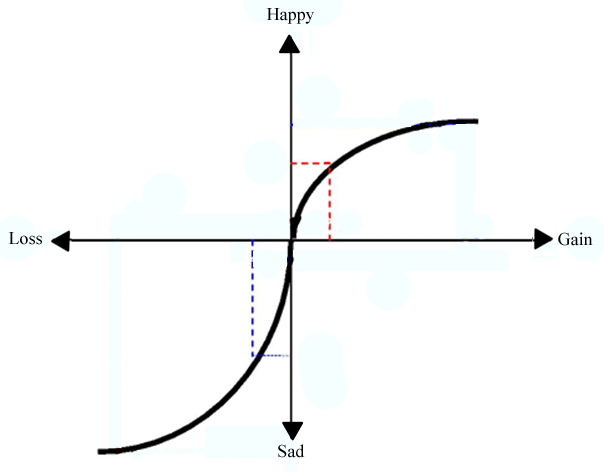 A while back I had author and game developer Geoffrey Englestein on my podcast. We talked about how the psychological concept of loss aversion affects game design, including tabletop role-playing games like Dungeons & Dragons. Loss aversion is pretty well known at this point, but here’s the short version: losing something is more painful than gaining something of equivalent value is pleasurable. For example, losing $10 is more painful than gaining $10 is pleasurable.

BEHOLD, I HAVE CREATED A GRAPH TO ILLUSTRATE:

Along the horizontal axis, you have losses and gains, with “zero” at the middle. The vertical axis we can simplify here as increasing happiness (top half) or sadness (bottom half). If you plotted the happiness that would result from a certain gain you’d draw the dot right on the line as shown by the red dotted lines on the graph.

Notice that the slope of the line is steeper in the losses/unhappiness lower left quadrant. That is, it takes much less loss to create a feeling of unhappiness that is equal in magnitude to the corresponding happy gain. Unhappiness plummets with only a little loss relative to how much gain is needed to create an equivalent amount of happiness. This is loss aversion.

One thing that really struck me in my conversation with Geoffrey Englestein was how loss aversion has shaped the evolution of Dungeons and Dragons from edition to edition, starting with AD&D up to 5th edition today.

In later editions of D&D, it’s kind of hard to frighten players. Characters in 4th and 5th edition are heartier and more powerful than in previous editions, and real loss isn’t usually on players’ minds since death can be avoided or even undone. This wasn’t always true, though. Character death was more common in previous editions, and once upon a time D&D even included something much worse: level drain.

I dug out my original AD&D Monster Manual from 1977 and looked at the entry for “Wight,” a nasty undead creature. The second paragraph contains this horrifying gem:

Because these monsters exist simultaneously on the normal and negative planes of the material plane, they are affected only by silver or magical weapons. This existence allows them to drain life energy levels — one such level each time they score a hit on an opponent. The creature so hit loses the hit points of damage scored (1-4) plus one experience level and all the bonuses derived from that level, i.e. hit dice, class bonuses, thief abilities, spell levels, etc. A 9th level magic user struck by a wight loses 1-4 hit points and he becomes an 8th level magic user…

Yeah. That’s right. If a wight hit your character you just lost a level. And it suuuuuucked. In his book, Achievement Relocked: Loss Aversion and Game Design Englestein writes:

In later versions, D&D third edition and version “3.5,” level drain was modified by allowing players to make a saving roll to prevent a level loss. But if the roll failed, the level was permanently lost.

In fourth and subsequent editions, level drain was completely removed. The undead creatures that used to have it now put effects on characters like weaken or immobilize –which could be cured through normal means within the game.

The reason for these changes, of course, is that because of loss aversion players HATED losing levels way more than they even enjoyed gaining them, and the prospect was terrifying. I think Englestein was 100% correct when he noted:

I agree. Why? Because loss aversion skews our perceptions of the expected value of such a bet. Because losses hurt more than equivalent gains are appealing, the bet doesn’t seem like it’s 50/50. It feels more like 30/70 in favor of a terrible outcome.

You see this kind of approach in game design all the time, where permanent character losses are avoided for the sake of enjoyment. Or, if the game designer is clever enough, the losses are reframed in a way that make them seem unlike losses or even like gains. For example, instead of taking a -2 penalty to their attack rolls because of an ancient curse, the enemies the character faces could get a +2 bonus to their defense rating on account of the same curse.

Does this make for a better D&D game? Should we go back to having monsters suck out character levels like marrow from a bone? Personally I don’t think so, but a lot of old school players may disagree. The sickos.

The Neuroscience of Why Hugs Feel So Good