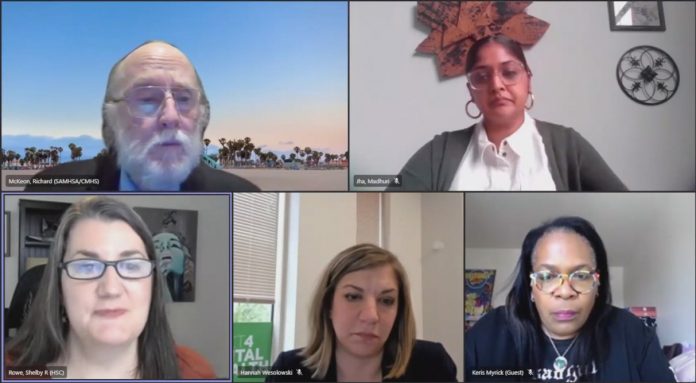 It actually wasn’t hyperbole when John Draper, the director of the National Suicide Prevention Lifeline/988 expansion initiative, said that America is “on the precipice of launching the largest mental health and suicide prevention service in this nation’s history.”

However, much else that got said at last week’s Federal Communications Commission (FCC) “Forum on Geolocation for 988” was hyperbolic. Government and mental health professionals seemed to be doing a hard-sell to promote public acceptance that anyone calling, texting, or chatting through the new 988 crisis hotline number should be grateful to have their exact geolocation automatically exposed to within three meters. This, in turn, left many questions about government’s commitment to taking seriously the mounting public concerns about crisis lines that do covert call tracing and forced interventions—even as those concerns did finally emerge in several impassioned speeches that shook the direction of the forum.

Over the past two years, Mad in America has reported on a groundswell of voices arguing that call centers in the self-described “anonymous” and “confidential” National Suicide Prevention Lifeline (NSPL) covertly and unnecessarily trace far too many calls, resulting in unwanted police encounters and traumatizing detentions and forced treatment in psychiatric hospitals. These protests have included the NSPL’s own Lived Experience Committee. Nevertheless, the nonprofit Vibrant Emotional Health, in charge of the NSPL and the roll-out of 988, has been lobbying government for direct control over cutting-edge call-tracing and geolocation-tracking powers—though NSPL centers already simply have to call 911 to get such call tracing done.

The issue has so far gone largely unreported in major news media, though Slate recently covered the controversy, while a New York Times story on 988 never mentioned it. Yet it has wide national relevance: The NSPL had 3.6 million contacts in 2021, and that number is expected to increase dramatically with 988 implementation—and with it, the numbers of people whose calls will be traced. Federal funding for the NSPL has leapt tenfold, turning a single crisis line into a billion-dollar industry, and the grand vision of proponents is that 988 will become a first-line access point for all mental health services around the country.

So the call-tracing and forced interventions issue needs more public debate. Yet, through much of the carefully curated FCC forum it was difficult to discern that there was anything at all controversial under discussion.

We can’t survive without call tracing?

The forum began with a four-hour parade of high-ranking officials, including FCC commissioners, Health and Human Services Secretary Xavier Becerra, Substance Abuse and Mental Health Services Administration (SAMHSA) leaders, and representatives of crisis call centers and mental health organizations that work closely with the NSPL. They unanimously extolled the “need” to be able to instantly and precisely geolocate anyone contacting 988, because “seconds count” when working to “save lives” of people who are in the act of killing themselves.

NSPL/988 director Draper similarly stated that call-tracing and precise geolocation were needed for “life-saving” purposes such as helping people who are “losing consciousness, and they’re going to die.”

Meanwhile, Draper and others repeatedly downplayed the NSPL’s current rate of tracing calls—2 percent—as “rare,” “a small percentage,” “very rare,” etc. But is 2 percent of callers actually “rare”? And Draper’s own data actually implied a still higher rate for those with suicidal feelings. Only 23 percent of callers to the NSPL express such thoughts—therefore, those unwanted interventions are apparently being implemented on 8 percent of the callers who express suicidal worries.

Either way, nearly every day hundreds of Americans who contact the NSPL are getting unwanted visits from police or other mobile intervention teams—about 60,000 people in 2021.

Draper briefly described the “risk assessments” that lead to these forcible interventions. However, he didn’t mention well-documented, extremely high error rates—since few people call the NSPL during the act of killing themselves, it becomes anyone’s guess if, or when, someone who has called simply to talk about suicidal feelings might or might not actually kill themselves.

And Sandri Kramer from Didi Hirsch Mental Health Services in California, which runs one of the nation’s busiest centers by call volume, provided insights into who these people are: Over half of their center’s contacts are people under the age of 25 including many children, over half are people of color, and about 2/3 are women. Basically, these are people who are likely to already be experiencing oppression and vulnerability in other aspects of their lives and communities. Nevertheless, hours of the FCC forum went by without discussion of any possible problems with subjecting these people against their will to police visits and forced psychiatric interventions.

Then, finally, came the panel about “988 Consumer Considerations With Geolocation“—like an eruption.

How do those we’re “helping” feel about our “help”?

Keris Jän Myrick, co-director of the Mental Health Strategic Impact Initiative, said that she was “struck” by how leaders of the 988 initiative were making the “a priori assumption” that geolocation tracking “is a good thing.” Myrick said the issues are complex. “Many times—I have had this happen in my own life—we’re calling for help, and it ends up in harm, it ends up in handcuffs. And, for worse, for many people, it also ends up in death; not at their own hands, but at the hands of the response team.”

When people call crisis lines, Myrick added, racism and other institutional and systemic inequities mean that “not everybody gets the same response.” Myrick described one county in California near her home “where there were five deaths because of a mental health emergency response… and four of those five deaths were Black folks. And [Black people] make up in that particular locality less than 5 percent of the population.”

Shelby Rowe, director of the Suicide Prevention Resource Center, pointed out that 988 is not being implemented “in a political vacuum.” Therefore, the lack of confidentiality could well have different hazardous consequences in states with different laws and prevailing prejudices. “If you are a trans girl of color in certain states… Will that geolocation data be used to turn your parents into child protective services?”

Similarly, Madhuri Jha of the Kennedy-Satcher Center for Mental Health Equity described the risks to undocumented immigrants—without sanctuary clinics, by tracing their calls we likely consign them to indefinite detention in an immigration prison.

Psychologist David Jobes of the American Foundation for Suicide Prevention said that many people with suicidal feelings don’t need psychiatric hospitalization in the first place, so if we’re going to forcibly intervene then we need to create alternative places for those people besides hospitals. Too often crisis line staff and clinicians “are erring on the side of caution in hospitalizing people,” said Jobes, leading to “nightmare stories of people being boarded overnight, sometimes for days, even weeks in the emergency department. That is not therapeutic.”

In line with others, Hannah Wesolowski from the National Alliance on Mental Illness said, “NAMI strongly recommends that the FCC proceed with a recommendation in your 2021 Report to Congress to establish a multi-stakeholder advisory committee, with us experts tasked with developing detailed recommendations [on 988 geolocation].”

The FCC facilitator then pushed the forum on through its scheduled programming: The final two hours were intended to be spent ironing out technical solutions to implement geolocation tracking.

But something different happened.

Senior representatives from AT&T, Verizon, Intrado, and T-Mobile reported that the technical hurdles to implementing 988 geolocation tracking were manageable. However, as their prepared speeches yielded to discussion, it became clear that they’d all been moved by what they’d heard from the “Consumer Considerations” panel. They no longer felt that acting quickly was wise.

This was given especially strong voice by Rosemary Leist, a policy and government affairs manager from T-Mobile. “After listening to everybody on the forum today,” said Leist, she now believed a “phased” and multi-faceted development approach for 988, over the course of years, made more sense. She said industry needed more time to develop appropriate policies and technical standards, call centers would need to adapt to rising call volumes, and communities should be building sufficient and appropriate support services for callers in distress. Installing mass-scale geolocation tracking immediately could prove counterproductive. “[S]omething this big and draconian, in my opinion, should be meticulously organized and planned for,” Leist said—then also expressed support for a multi-stakeholder working group.

Are the FCC, SAMHSA, and mental health professionals listening?

However, none of those possible compromises were raised by anyone other than the people on the consumer panel. And the forum organizers had noticeably not brought in any group with expertise on privacy issues. This, combined with the fact that the organizers corralled the critical voices into one panel instead of allowing such voices to participate throughout the day, inevitably raised questions of bias. This bias seems to reflect the “we know what’s best for you” attitude that permeates most of our mental health service systems. So, will the FCC even follow their own previous recommendation of establishing a multi-stakeholder committee to examine geolocation tracking concerns, or is the FCC already collaborating too closely with SAMHSA and Vibrant Emotional Health?

Meanwhile, how dangerous could automatic geolocating turn out to be? No one mentioned one of the most at-risk groups: Pregnant women. Already, many states have criminalized substance use during pregnancy, and more have, or are on the verge of, criminalizing abortion. In effect, then, if a pregnant woman who is using a substance or considering abortion calls 988, it would be the same as a caller seriously saying they were literally in the act of killing themselves or were about to kill someone else. If the call-center had already geolocated the woman to a state where substance use or abortion is criminalized, they’d have a legal “duty to report” and to send police to arrest the woman. Is that what leaders of the 988 initiative call “help”?

Editor’s Note: MindFreedom is hosting a discussion on this topic on Wednesday, June 1, at 6 p.m. eastern time. Rob Wipond, Keris Myrick, Karin Jervert, and Robert Whitaker will be the panelists for the discussion, which will be moderated by Ron Bassman.

Beyond Benzos: Jordan B. Peterson’s Trip to Hell and Back