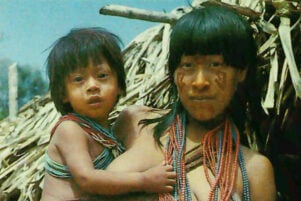 From ContinuumConcept.org: Jean Liedloff was a Manhattan socialite with a fascination for the wild. In the 1950s and ’60s, she made a series of expeditions to the Venezuelan rainforest and spent several years living with the Yequana people. What she observed about how they lived, and especially how they treated their babies and children, resulted in her book The Continuum Concept: In Search of Happiness Lost, which spurred the attachment parenting movement and influenced evolutionary psychology and the home-schooling movement. According to her biographer, “The glaring contrast between the richly connected way of life in tribal villages and the relative alienation of our culture caused her to question some of our most basic assumptions about human nature. Over time, she became convinced that humans are innately cooperative and hard-wired for happiness. She cites our ignorance of this fact as the underlying cause of all our psychosocial ills.” Her book, according to Gloria Steinem, “shows how we can make the journey back to a society characterized by cooperation and joy.” Here she is interviewed by Michael Mendizza, filmmaker and founder of Touch the Future, an organization whose goal is “to bring about a deep change in the way adults view and relate to the developmental needs of children.”

“The jungle represented something you felt was missing from your New York background. Can you reach back and help me understand this?

As a child I was attracted to Tarzan and everything that had to do with jungles. It seemed to me — and this is in retrospect — that there was something primal, something right about it.

. . . I suppose I was looking for what I found and shouldn’t have been so surprised when I found it, which wasn’t until the fourth expedition. It was then I realized that I had unlearned a great many assumptions that I had about human nature.

It became clear that we have made a terrible mistake about what human nature is. We are under the misapprehension that we’re born bad, or in the official words of the Church of England, innately depraved, and that is simply not true.

Let’s go back. You said that you started to have a series of insights.

I was taking my assumptions apart, thinking, ‘gosh, if this isn’t true then that isn’t true.’ I was living for more than two years with these Indians, looking straight at them and not really seeing them, because I was so blinded by preconceptions. I didn’t even notice that, amazingly, the children never fought. They played together all day unsupervised, all ages, from crawling, to walking to adolescence. Not only did they not fight, they never even argued. This is not at all what we have been taught human nature is — boys will be boys. So I thought well maybe, boys won’t be boys.

It was a long time before I began to notice what was before my eyes. One thinks, ‘Well, these are savages. They wear red paint and feather loin cloths, so they’re not people.’ But they’re exactly the same species as we are, except they are behaving the way we all evolved to behave. We, on the other hand, are mistreated as infants and children, treated inappropriately for our species.

As a result, we keep re-creating an anti-social population. Nobody’s born rotten. You just don’t have bad kids. It’s not true. There is no such thing. But we can make them bad.

Ironically, the reason it’s possible to make these profoundly social animals bad or anti-social is because we are so social. Our parents, our tribesman, our authority figures, clearly expect us to be bad or anti-social or greedy or selfish or dirty or destructive or self-destructive. Our social nature is such that we tend to meet the expectations of our elders. Whenever this reversal took place and our elders stopped expecting us to be social and expected us to be anti-social, just to put it in gross terms, that’s when the real fall took place. And we’re paying for it dearly.

Just imagine the neurotic and psychopathic people that we have become. Why do we have a 50% divorce rate? Why do we have so many police? It’s not just Americans, it’s the whole of Western civilization laboring under a misapprehension of what human nature truly is. That’s what I learned from my experiences.

. . . I don’t mean to be disrespectful to our experts. They may be able to distinguish a measle from a mump, which is very useful if you have one or the other. But that doesn’t, for one minute, give them deep knowledge of correct human behavior.

Researchers faithfully try to document what is normal. Nobody I know really wants a normal child. Just look at normal. It includes what’s called the terrible twos, which are sort of wild, bossy tantrum-prone con-men. Luckily they’re small otherwise we’d really be in trouble. And we’ve got God knows what kinds of drudgery and alienation for children and parents.

We use the word normal as though it were a synonym for natural, which it is not.

. . . Today normal is adversarial. The baby arrives and has an innate expectation that it will be among trustworthy allies. That’s not what happens. From the baby’s point of view he or she feels like ‘they’re not on my side.’

So normal is adversarial. I hope people realize that what they’re doing with all the love in their hearts, and I have no doubt of that, is adversarial.

. . . It’s easy to see how this normal but unnatural behavior perpetuates itself. When a baby girl is born and her mother doesn’t answer her cries, she feels that she has no power to signal and summon help. Unfortunately, human nature is such that she cannot blame the parent. So she feels she’s not good enough, not lovable enough, ‘I haven’t done the right thing. I’m not worth responding to.’ This is universally the reaction of babies. They feel that they haven’t got it right or they’re not good enough because they’re so social, ironically. They believe in the authority of their elders, their parents. If parents don’t come, they feel that their instinct — to cry — wasn’t right. They don’t know anything else, and it doesn’t work.

As they grow older and look under blades of grass to see what’s growing, or cutting up worms, or tasting things, and they hear, ‘don’t do that, no don’t do that, bad, naughty.’ Their faith in their own instincts are constantly undermined. ‘Don’t touch that, you’ll hurt yourself.’ ‘Don’t get up on that, you’ll fall.’ If babies were allowed to trust and develop their innate wisdom and intelligence they wouldn’t fall into the swimming pool. They wouldn’t dream of it.

Let’s talk about trust. How could we have gotten to this place where when the baby’s screaming we deny our natural innate tendencies to respond and pick it up? Both in the medical field and as mothers?

Our faith in our own instincts is undermined right from birth. The first job we have on Earth, which is dictated innately, is that of an explorer. We go around sniffing and tasting and touching and looking at everything. And people say, ‘Don’t touch, it’s dirty,’ ‘Don’t touch that; be careful, you’ll hurt yourself,’ ‘Don’t do that, you’ll break it!’ — all of which constantly undermines our feeling of competence, our trust in our instincts.

When you get to school people say, ‘sit still, fold your hands, don’t talk to your neighbor.’

Whatever children are doing — is learning. They’re learning like little sponges, all the time. But they’re told, ‘Stop it because this is worthless. What is important is this. Pay attention. “A” is for apple.’ Everything else is undermined and pronounced worthless. ‘A’ isn’t even for apple. It could be for aardvark, it could be for God knows what, anything you like. But they arbitrarily tell you that ‘A’ is for apple. Nothing else counts. And they persist. All your authority figures tell you that your nature, which is to explore, is worthless. If they don’t teach you, it’s not learning.

I’ve recently come to the startling but obvious conclusion that learning occurs naturally, but teaching isn’t natural at all. I can’t remember ever seeing any of the people I’m talking about, who live so successfully, teaching. The little ones are learning from the older children or from the adults, but nobody’s teaching.

They’re learning on their own initiative, which is so powerful. You don’t have to augment it. In fact you can’t really augment it. There’s no way you can make a child learn better than he would if he or she wants to.

By the time we have our first child, we’re so conditioned not to believe our innate feelings that we have total strangers in the hospital tell us what to do and we don’t know any better. It’s tragic. We have an exquisitely evolved innate knowledge of how to do things. Mothers know that the baby should not be taken away at birth but they have been so conditioned to believe in an authority and not themselves, that they deny their own wisdom.

. . . We act as though human nature were something to be afraid of; to constrain, modify or fight; to subdue and overcome. Somehow we have gotten away from believing that we evolved in a way that works. We believe that our nature has to be modified, opposed and controlled from the very beginning . . .

Does this lack of basic trust permeate our entire culture?

In the broadest terms we have lost trust in our own essential nature. We don’t just mistrust children, we mistrust ourselves. We mistrust human nature itself. The reason I’m always talking about babies and children is because this is where the mistrust first manifests itself, where it is formed. But I’m talking about all human beings. I’m talking about society as it is.

Society is unpleasant, dangerous, unhappy, alienated, and unstable because in childhood our nature — being confident, joyous and loving — has been undermined and we simply live the way we are expected to. What we believe is what we make our experience into. And what we believe is what we have been taught to believe by our parents and our experiences.

. . . These beliefs are instilled in us in infancy, before we’re able to judge anything. We cannot look in the mirror and say, ‘Well I’m a nice little girl. I’ve got all my fingers and toes and I’m a sweet little thing. I’m intelligent and charming and I got a little pink party dress and I’m just fine.’ We can’t do that. We can only get our feeling of worth about ourselves and everything else from our authority figures. And this is what children do. They take the authority of these people and believe it. Whatever it is. This becomes the basic feeling we have about self and also about the relationship between self and other.

How can we empower children and then later adults to trust their nature?

We don’t need to empower children to trust their nature. The tendency to trust is there. We simply need to allow them to do so.”

Many Of Us Feel ‘Empty’ – Understanding What It Means Is Important For Improving...

Being Chased, Losing Your Teeth or Falling Down? What Science Says About Recurring Dreams