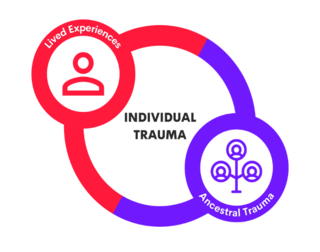 At Emory University, researchers conditioned male mice to fear the smell of cherry blossoms. To do this, they introduced the cherry blossom odor into the environment and concurrently delivered an electric foot shock to the mice. Over time, the mice displayed a fear response to the odor, even when a shock was not given. When they mated these fear-conditioned mice with naïve unconditioned female mice, their offspring were much more sensitive to the cherry blossom scent compared to the offspring of two naïve parents. The researchers found that the succeeding two generations not only exhibited this behavioral sensitivity but also had an increased number of olfactory receptors for detecting the scent of cherry blossoms. The trauma of the conditioned ancestors had been transmitted across generations through their DNA.

Memories of trauma can be inherited across generations. The same evolutionary mechanism that warns future generations of potential danger in mice is observable in humans, and especially so among groups whose ancestors have experienced historical trauma. Individual trauma is a combination of both lived experience and heritable ancestral trauma (Figure 1).

Therefore, the trauma created and facilitated by systemic racism in America is not only felt through present-day social injustices but is amplified through a legacy of transgenerational trauma transmission. Consequently, building a comprehensive understanding of historical and persisting racism in America is key to unraveling generational trauma and ending its cycle.

What Is Generational Trauma?

Generational trauma is defined as trauma that is passed down from those who directly experience it to those without firsthand exposure to the original traumatic event. The most well-studied example of generational trauma is that of Holocaust survivors and their descendants. Research has shown that children of Holocaust survivors present an increased likelihood of developing mental health disorders, specifically anxiety, depression, and post-traumatic stress disorder.

Black, Indigenous, and people of color (BIPOC) continue to struggle with generational trauma and its accompanying negative psychological effects (i.e., feeling inferior, negative coping skills). BIPOC have historically been excluded, mistreated, and deemed inferior in society, making the cycle of generational trauma difficult to break. A common illusion is that racism ended when slavery did. However, from police brutality against BIPOC1 to anti-Asian racism2 surrounding the COVID-19 pandemic, evidence of modern racism is pervasive. These events feed into systemic racism and trigger new traumas to be inherited by future generations.

Generational trauma can be negotiated through the theoretical framework of critical race theory (CRT), which posits race as a social construct that continues to reinforce racism in our lives (e.g., through the legal system, higher institutions, etc.). Because generational trauma is not only inherited from our ancestors but is also amplified through systemic reflections of these traumas, healing can be difficult. CRT aims to transform the relationship between race, racism, and power. Its goal is not to shame, blame, or trigger. It does not resolve to pit people of color against white people. Rather, it subverts the notion of “colorblindness” by acknowledging race as a construct to be challenged and racism as a structure to be dismantled.

Racism is not facilitated by individual biases—it is sustained by racist structures that reflect generations of racial trauma. Generational trauma is perpetuated when systems go unexamined, and histories go untold. Therefore, CRT has the goal of healing generational trauma by confronting the history of racism and moving toward understanding and equity.

A major tenet of CRT, counter-storytelling, amplifies the stories and experiences of underrepresented communities. Counter-storytelling creates space for minority experiences, elevating their voices and personal narratives. For example, teachers can introduce literature by minority authors, such as Beloved by Toni Morrison or Native Son by Richard Wright, and a variety of others, to represent the minority experience in the classroom. Another signature of CRT is revisionist history, which corrects the historical record to include the untold perspectives of minority populations. A prime example of revisionist history is the New York Times The 1619 Project3. Launched in August 2019—the 400th anniversary of the beginning of American slavery—the 1619 Project reframes history by positioning the stories and triumphs of enslaved people and the Black community at the forefront of the national narrative of slavery.

Throughout medical history, the Black community has experienced violence and exploitation, which has reinforced a justified mistrust of the healthcare system. This mistrust is passed down intergenerationally, reflected in greater vulnerability and worse health outcomes in the Black community to this day.

The Tuskegee experiment is the longest-run medical experiment in the United States (from 1932-1972). For it, the United States Public Health Service recruited 600 Black men for an experiment tracking the full progression of syphilis. Participants were told they would be receiving free health care to treat “bad blood” when they received no treatment over the study’s course and were even actively prevented from receiving penicillin, a cure for syphilis. The impacts of the Tuskegee experiment reach across generations decreasing willingness to participate in medical research and life expectancy for members of the Black community.

Medical trauma based on scientific racism is also evidenced by the unethical experimentation on enslaved Black women by James Marion Sims. During the 1840s, Sims conducted experimental reproductive operations on enslaved Black women in an attempt to devise a surgical method of repairing vesicovaginal fistula. One woman (“Anarcha”) underwent 30 operations (without anesthesia, due to Sims’ false beliefs) over the course of four years until Sims succeeded.4 These atrocities manifest in significantly worse maternal health outcomes, with Black women being three to four times more likely to die during childbirth than white women.5

Healing From and Dealing With Generational Trauma

Without CRT intervention, generational trauma will continue to detrimentally affect society through cyclical minimalization and denial. By bolstering CRT education, society’s cultural foundation is reformed through empathetic conversations in families and cross-cultural understanding. Healing from any type of trauma takes time and is a unique process that occurs at the level of the individual, the institution, and the system. Figure 2 outlines strategies within each level to help cope with generational trauma, as well as to be a good ally. 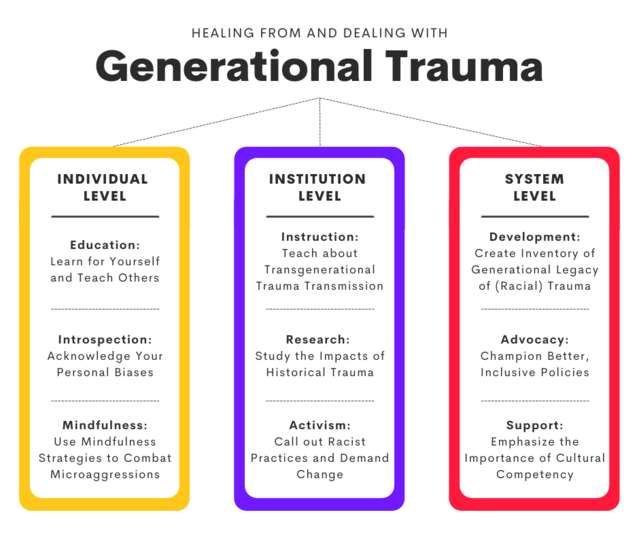 Julia Myerson, Jessa Westheimer, Nadine Obeid, and Christopher Frazier are members of the Research Department at The Menninger Clinic.

Photo or the Real Thing? Mice Can Inherently Recall and Tell Them Apart

From The Invisible To The Visible – My Brain Lesion and Me