Since children do not come with manuals, parents often struggle to determine how to raise mentally strong, well-rounded and successful kids. Some parents are strict, while others are lenient. Some are vigilant, while others are distant.

If the question ″What type of parent do I want to be?” has ever crossed your mind, it helps to understand the basics of different parenting styles.

The 4 types of parenting

The four main parenting styles — permissive, authoritative, neglectful and authoritarian — used in child psychology today are based on the work of Diana Baumrind, a developmental psychologist, and Stanford researchers Eleanor Maccoby and John Martin. 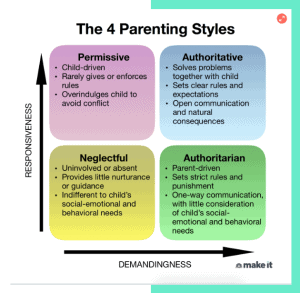 Permissive parents are more likely to take on a friendship role, rather than a parenting role, with their kids. They prefer to avoid conflict and will often acquiesce to their children’s pleas at the first sign of distress. These parents mostly allow their kids to do what they want and offer limited guidance or direction.

Sometimes referred to as uninvolved parenting, this style is exemplified by an overall sense of indifference. Neglectful parents have limited engagement with their children and rarely implement rules. They can also be seen as cold and uncaring — but not always intentionally, as they are often struggling with their own issues.

This rigid parenting style uses stern discipline, often justified as “tough love.” In attempt to be in full control, authoritarian parents often talk to their children without wanting input or feedback.

What is the best parenting style for you?

While children of authoritative parents are not immune to mental health issues, relationship difficulties, substance abuse, poor self-regulation or low self-esteem, these traits are more commonly seen in children of parents who strictly employ authoritarian, permissive or uninvolved parenting styles.

Of course, when it comes to parenting, there is no “one size fits all.” You don’t need to subscribe to just one type, as there may be times when you have to use a varied parenting approach — but in moderation.

The most successful parents know when to change their style, depending on the situation. An authoritative parent, for example, may want to become more permissive when a child is ill, by continuing to provide warmth and letting go of some control (e.g. “Sure, you can have some ice cream for lunch and dinner.”).

And a permissive parent may be more strict if a child’s safety is at stake, like when crossing a busy street (e.g. “You’re going to hold my hand whether you like it or not.”).

At the end of the day, use your best judgement and remember that the parenting style that works best for your family at that time is the one you should use.

Francyne Zeltser is a child psychologist, school psychologist, adjunct professor and mother of two. She promotes a supportive, problem-solving approach where her patients learn adaptive strategies to manage challenges and work toward achieving both short-term and long-term goals. Her work has been featured in NYMetroParents.com and Parents.com.

The post A psychologist shares the 4 styles of parenting—and the type that researchers say is the most successful appeared first on Manhattan Psychology Group.

Age is just a number: Cross-generational conversations are more positive than you expect

Could Childhood Inflammation or Infection Be a Cause of Depression and Psychosis?

Inside a Forensic Psychiatry Unit: Calling in AIR Strikes