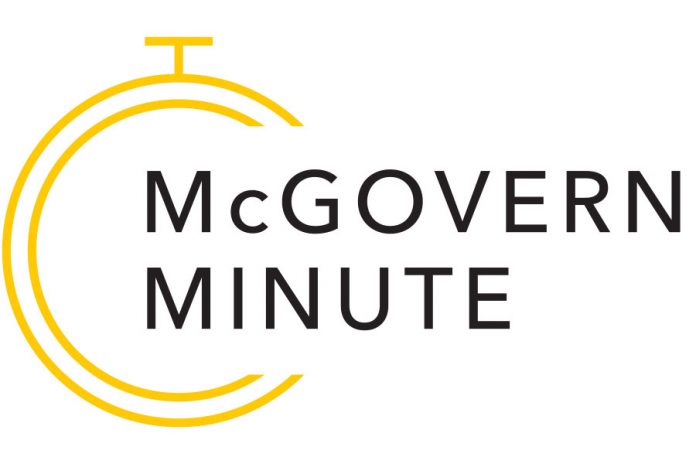 Doing brain research is hard. Explaining it in 60 seconds or less is even harder.

At the McGovern Institute, scientists from all over the world are studying how brain cells work, and how they come together to influence our thoughts, behaviors, and emotions.

And the researchers doing the work are just as diverse. The McGovern Minute video series features a selection of young McGovern scientists who are using different tools to unlock the mystery of the brain. With only 60 seconds to communicate their work and inspire the next generation of STEM researchers, these scientists paint a compelling picture of brain research at MIT (in less time than it takes to brush their teeth).

Dana Boebinger: The Science of Illusions

Optical illusions like #TheDress have baffled and amazed people for centuries, but they also reveal a lot about the inner workings of the human brain. Dana Boebinger, a McGovern neuroscientist who studies perception, explains why our brains sometimes perceive color — and sound — differently.

Kian Caplan was bullied as a child. He couldn’t control the sounds or movements he made, and his peers ridiculed him for being different. As a teenager, Kian was diagnosed with ADHD, OCD, and Tourette syndrome. Today, he is a McGovern neuroscientist on a quest to understand what makes his brain different — and to recruit other neurodiverse students to study the brain.

Jessica Chomik-Morales is a McGovern brain scientist and host of the Spanish neuroscience podcast Mi Ultima Neurona. Jessica, whose family is from Paraguay, is passionate about delivering free and engaging content to the global Hispanic community, which has historically been underrepresented in the sciences. By interviewing neuroscientists of different Hispanic origins, she hopes her podcast will inspire the next generation of Spanish-speaking scientists.

As a young child growing up in Mexico, Fernanda de la Torre crossed the border with her family because they imagined a better future for themselves in America. As a teenager, she escaped an abusive home because she imagined a safer place somewhere else. Now, as a computational neuroscientist at the McGovern Institute, Fernanda uses math to understand how the brain distinguishes imagination from reality.

As Black students in the STEM community, Malik and Miles George are on a mission to spread science advocacy and diversity to students of all ages. Their TikTok account, which has amassed more than one million likes, features dozens of science videos on topics ranging from physics to COVID-19 vaccines. The fraternal twins and MIT undergrads bring their signature style and infectious humor to this McGovern Minute, where they list the top five reasons to study the brain.

﻿
Each cell in our body contains six feet of DNA. All of this genetic material is bundled into a tiny package one-tenth the width of a human hair. Paul Reginato, a biological engineer at the McGovern Institute, has developed a technology that allows researchers to untangle this bundle and read the letters of DNA inside the cell. These DNA “maps” are providing scientists with new clues about how neurons work in the brain.

Ashley Thomas: What Puppets Can Teach us About Babies’ Brains

Before babies learn to talk, it is almost impossible to know what they’re thinking. Ashley Thomas, a cognitive scientist at the McGovern Institute, has begun to unlock the mystery of babies’ brains using a very unusual tool: puppets. By observing how babies respond to puppets in various situations, Ashley shows us that babies understand a surprising amount about the social world around them.

Quique Toloza was obsessed with video games as a kid — so obsessed, he built a computer and programmed video games based on his own wild imagination. Quique is now a physicist at the McGovern Institute, where he builds computer models of the brain to try to understand how and why the brain works the way it does. And just like his early video games, the only limit to what Quique builds, is his own imagination.

﻿
An estimated 24 million people in the world suffer from schizophrenia, a serious brain disorder that affects a person’s ability to think clearly. Although some treatments can help, there is currently no cure. McGovern neuroscientist Tingting Zhou hopes to change that. She is repairing the abnormal genes and brain circuits linked to schizophrenia, with hopes of one day solving the mystery of this devastating disorder.