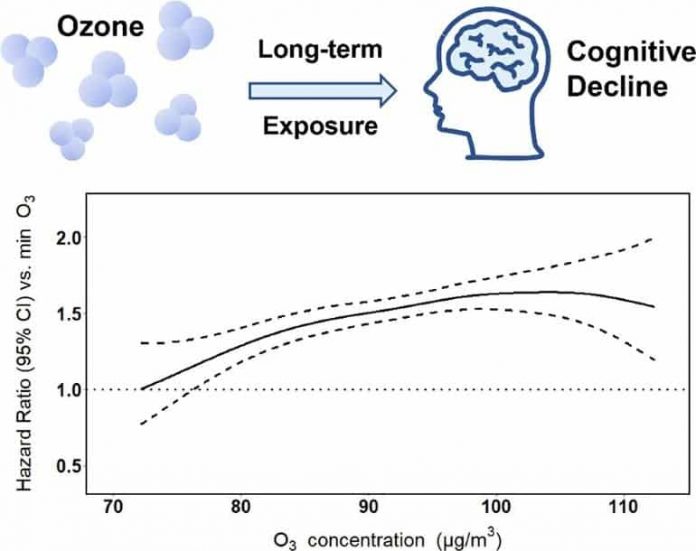 Summary: Study establishes a robust link between ozone exposure and an increase in cognitive impairment in older adults.

A new, large-scale study led by scientists at the Yale School of Public Health has established a robust link between long-term ozone exposure and an increased risk of cognitive impairment in older adults.

Air pollution has long been considered a major risk factor for an aging society. Fine particulate matter floating in increasingly high concentrations around the globe can lead to dementia and other cognitive disabilities, and those affected can easily burden health care systems in areas with populations that skew older. But beyond airborne particles, little is known about the way in which other pollutants can pose a similar danger.

For their study, which was published in Environment International in January 2022, the researchers instead chose to focus on ambient ozone, a highly reactive gas that exists in much of smog at ground level. They then observed health outcomes in nearly 10,000 older adults across China and analyzed the extent to which long-term ozone exposure may have impacted their cognitive ability over time.

The results, they found, were startling. For every 10 microgram increase of yearly average ozone exposure, the risk for cognitive impairment grew by more than 10%.

Through their analysis, the researchers also found that this association held even when they abstracted away individual risk factors such as smoking, drinking and education level. That is, older adults in China who were exposed to high levels of yearly ozone pollution were more likely to develop cognitive disabilities later in life, no matter what other activities they were involved in.

“Our findings suggest potential benefits in delaying the progression of cognitive decline among older adults if ozone levels are reduced below the new WHO Global Air Quality Guideline for ozone pollution,” said Kai Chen, Ph.D., assistant professor at the Yale School of Public Health and the study’s lead author.

There are limitations to their findings, however. The Yale-led team of researchers noted in their paper that the observational data alone are insufficient to establish a causal link between ozone and cognitive decline in older adults. More studies are needed to explore the mechanisms behind ozone’s destructive capabilities in humans before such a claim can be made, they wrote. And since many older adults in China spend most of their time inside, indoor levels of ozone pollution could be different from the open-air averages the researchers used in their study.

Nonetheless, the study is the first to establish this link across large swaths of the Chinese population over several years. And they match what other researchers have found in areas across the globe: Over the past several years, studies have traced a similar link in adults in the United States and in Taiwan, and have also found an association between ozone exposure and other neurological diseases.

The results point to an urgent need to curtail ozone exposure across the globe, they wrote in their study, in an effort to keep healthcare systems from being overwhelmed as pollution rises and the world population gets older.

YSPH Professor Robert Dubrow, M.D., Ph.D., faculty director at the Yale Center on Climate Change and Health and a co-author of the study, said what makes this issue more urgent is that “ozone pollution is projected to be worsening under climate change.” Strategies to reduce this threat, Dubrow said, “may help maintain a higher quality of life among older adults and bring significant public health benefits to an aging society.”

About this cognitive decline and environmental neuroscience research news

We examined the association of long-term ozone exposure with the risk of cognitive impairment among a national representative cohort of 9,544 Chinese older adults (aged 65 years and over) with baseline normal cognition from the Chinese Longitudinal Healthy Longevity Survey (2005–2018).

The ozone exposure of each participant was measured by annual mean ozone concentrations for the county of residence. Cognitive function was assessed by the Chinese version of the Mini-Mental State Examination (MMSE). We defined cognitive impairment as an MMSE score below 18 points accompanied by an MMSE score that declined ≥ 4 points from baseline. Cox proportional hazards models were applied to explore the association of ozone exposure with cognitive impairment.

Our results show that ozone is a risk factor for late-life cognitive decline. Reducing ambient ozone pollution may help delay the onset of cognitive impairment among older adults.

Giving Up on Mental Health Care