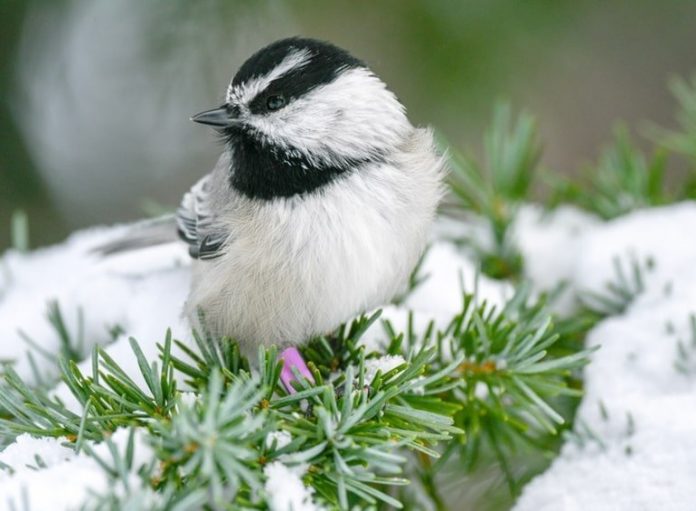 Summary: A new study reveals there is a genetic component to spatial memory in Mountain Chickadees.

For the first time, researchers have shown that there is a genetic component underlying the amazing spatial memories of Mountain Chickadees. These energetic half-ounce birds hide thousands of food items every fall and rely on these hidden stores to get through harsh winters in the mountains of the West.

To find these caches, chickadees use highly specialized spatial memory abilities. Although the genetic basis for spatial memory has been shown for humans and other mammals, direct evidence of that connection has never before been identified in birds.

“We all use spatial memory to navigate our environment,” says lead author Carrie Branch at the Cornell Lab of Ornithology. “Without memory there’s no learning and an organism would have to start from scratch for every task. So, it really is life and death for these birds to be able to remember where they stashed their food. We’ve been able to show that natural selection is shaping their ability to remember locations.”

If natural selection (survival of the fittest) is shaping chickadee memory, certain criteria have to be met. There has to be variation in the trait: some chickadees are indeed better than others at re-finding their stores. There has to be a fitness advantage: birds that perform better on a spatial memory task are more likely to survive and produce offspring. Importantly, variation in the trait must have a genetic basis.

“Environment does still matter a lot in terms of shaping behavior, but our work here suggests that genes may create the brain structures, and then experience and learning can build on top of that,” Branch explains.

How do you measure a chickadee’s memory? Senior author Vladimir Pravosudov and his team at the University of Nevada, Reno, designed arrays of “smart” feeders to measure memory in a population of wild Mountain Chickadees in California’s Sierra Nevada mountains. Each feeder is equipped with radio frequency identification sensors.

The 42 birds tested were fitted with leg tags the size of a grain of rice which give off an identifying signal. Each bird was assigned to one of the eight feeders in each array. The feeder sensor reads the bird’s ID tag and if it’s the matching feeder for that individual, a mechanism opens the door, and the bird gets a seed. The scientists then tracked how many tries it took before the birds consistently went to the correct feeder.

“This is an effective system to test spatial learning and memory in hundreds of wild chickadees in their natural environment,” said Pravosudov. “We have previously shown that even very small variations in performance are associated with differences in survival.”

Spatial cognition is used by most organisms to navigate their environment. Some species rely particularly heavily on specialized spatial cognition to survive, suggesting that a heritable component of cognition may be under natural selection. This idea remains largely untested outside of humans, perhaps because cognition in general is known to be strongly affected by learning and experience.

We investigated the genetic basis of individual variation in spatial cognition used by non-migratory food-caching birds to recover food stores and survive harsh montane winters. Comparing the genomes of wild, free-living birds ranging from best to worst in their performance on a spatial cognitive task revealed significant associations with genes involved in neuron growth and development and hippocampal function.

The Neuroscience of Why Hugs Feel So Good

Climate Changed the Size of Our Bodies and, To Some Extent, Our Brains