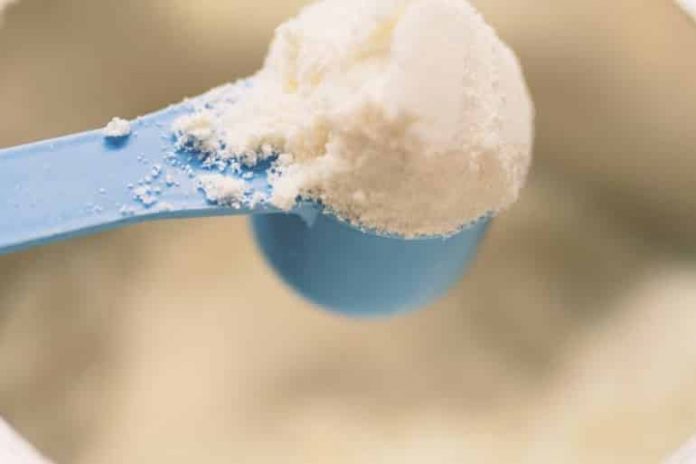 Summary: Study reveals children who were given nutritionally modified formula as infants performed no better on educational tests of math and English than those who received standard formula.

Babies who were given nutritionally modified formula milk had the same maths and English exam results as children who were given standard formula milk by age 16, finds a major new study led by UCL researchers that links seven randomized controlled trials to school performance results.

Scientists from the UCL Great Ormond Street Institute of Child Health (GOS ICH) and the UCL Institute of Education, who published their findings in the BMJ today, used a novel approach to link school performance and health data to see whether nutritionally modified formula milk made any difference to later cognitive ability.

The research team analysed data from 1763 children who were participating in trials between 1993 and 2001 and were randomly given either enriched or standard formula milk. Randomisation ensured that the groups were equal in all ways apart from the type of formula milk they received.

The researchers then gathered anonymised data for 91% (1607) of the children from their school records at age 11 and 16 to see if the type of milk they had been given as babies had a noticeable effect on their school performance.

Two of the trials tested formula milks which had been enriched with a long chain polyunsaturated fatty acid (LCPUFA), one of the many breast milk constituents with a role in brain development. Another trial tested follow-on formula with high-iron content and two tested nutrient enriched formula milks. A further two tested formulations with added sn-2 palmitate or nucleotides, but these were not thought to relate to cognition.

Data from the trials was linked to school records and showed that there was no benefit on scores for national exams in maths at age 16 years (GCSEs).  At age 11, children who had been given the LCPUFA supplemented formula scored lower in both English and maths, but this could not be confirmed at age 16 years. None of the other modified formulas led to improved performance in English at age 16 and in maths and English at age 11 years (Key Stage 2) or affected eligibility for special educational needs support and achieving five or more GCSE grades of C or higher.

Co-author, Professor Ruth Gilbert (UCL Great Ormond Street Institute of Child Health) said: “Our findings suggest there are no long-term benefits of these modified formula milks on brain development. Regulators should use these findings to reconsider licensing which modifications of formula milks are approved and to ensure that labelling of products excludes unproven claims.”

The researchers note that although the trials were carried out several decades ago but are relevant to formula milks used today. However, new types of formula are being developed. This study shows how linkage to education data could make long-term follow up of cognition much easier for future and past formula trials.

Lead author Dr Maximiliane Verfürden, who carried out the research at the UCL Great Ormond Street Institute of Child Health, added: “No previous research has shown conclusive benefits for cognitive ability of these nutritionally modified formulas, but the evidence was uncertain due to short follow-up periods and high drop-out rates over time

“This study sets a precedent for other trials and cohorts to use linkage of historic trials to administrative data to address high participant drop-out over time and answer important questions about long term outcomes in children and young people.”

To compare differences in academic performance between adolescents who were randomised in infancy to modified or standard infant formula.

1763 adolescents (425 born preterm, 299 born at term and small for gestational age, 1039 born at term) who took part in one of seven randomised controlled trials of infant formula in infancy.

The primary outcome, determined by linkage of trial data to school data, was the mean difference in standard deviation scores for mandated examinations in mathematics at age 16 years. Secondary outcomes included differences in standard deviation scores in English (16 and 11 years) and mathematics (11 years). Analysis was by intention to treat with multiple imputation for participants missing the primary outcome.

Journal Scan – This Month in Other Journals, November 2021