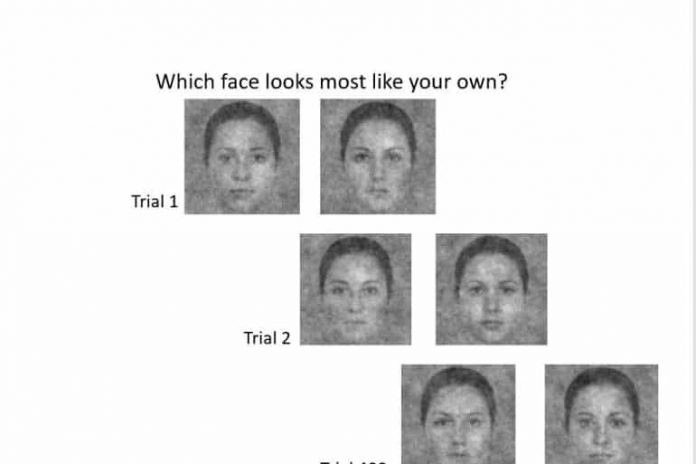 Never has there been a time when we were so obsessed with appearance than our current ‘selfie’ age. Many argue that the obsession with selfies and manipulation of images may turn some of us into narcissists, while others may also experience greater body image dissatisfaction. But how do we actually see ourselves in our mind’s eye?

Psychologists at Bangor University and the University of London are the first to develop a method of visualizing these mental ‘self-portraits’ we hold in our minds. They explored how far these internal images may deviate from what others see, and demonstrated how they can be affected by our beliefs about our personalities and our self-esteem.

In a paper published in at Psychological Science, Dr. Lara Maister of Bangor University’s School of Human and Behavioural Sciences demonstrates not only how the research team devised a way to access other people’s mental image of themselves, but also, for the first time, to compare that image against reality, and explore how that image may be affected by their beliefs about their own character traits.

In the team’s research, the participants’ mental images of their own faces were reconstructed using a computer-based technique that has been employed in the past to help psychologists visualize how we mentally see things. To create a mental selfie, participants see two random faces and each time they must choose the one that looks more like their own face, a process repeated several hundred times. At the end, the researchers can average all the images that people thought looked more like themselves, and that allows them to visualize the participants’ “mental selfies.”

Intriguingly, the team found that people’s mental pictures of what they look like weren’t necessarily true-to-life, and rather were influenced by what kind of personalities they believed themselves to have.

Dr. Lara Maister of the School of Psychology at Bangor University and lead author of the paper says, “We asked participants to generate their own computer-generated ‘mental self-portrait,’ and also to answer personality and self-esteem questionnaires to reveal what type of person they believe themselves to be. We found that their beliefs about themselves strongly affected how they pictured their own appearance. For example, if a person believed that they were an extrovert, they pictured their own faces as looking more confident and sociable than they appeared to other people.”

Professor Manos Tsakiris, from Royal Holloway, University of London and the Warburg Institute, says: “When we see a new face, within a fraction of a second, we have formed an impression about that person, based on what we see. Independently of whether such impressions are correct or not, they color our views about people’s personalities. In a similar but reversed way, we have now shown that our impressions of our own character affects how we see ourselves in our mind’s eye.”

People who had very negative emotional attitudes towards their own appearance tended to picture themselves as having a much larger body than in reality.

Professor Matthew Longo, from Birkbeck University of London, who was also part of the research team, said, “The work will help us understand more about body image. We can now, for the first time, gain an insight into how other people imagine they look, in healthy people and in those suffering from body image disorders like body dysmorphic disorder.”

Adapting this method could give clinicians supporting people with body image disorders a new tool to measure whether therapies have been successful. Currently this is commonly assessed using questionnaires which evaluate whether the patient’s negative beliefs about themselves have changed.

Developing such a tool could assess whether the individual’s mental picture of their appearance has also changed.

About this psychology and perception research news

Original Research: Closed access.
“The Self in the Mind’s Eye: Revealing How We Truly See Ourselves Through Reverse Correlation” by Lara Maister et al. Psychological Science

The Self in the Mind’s Eye: Revealing How We Truly See Ourselves Through Reverse Correlation

Is there a way to visually depict the image people “see” of themselves in their minds’ eyes? And if so, what can these mental images tell us about ourselves? We used a computational reverse-correlation technique to explore individuals’ mental “self-portraits” of their faces and body shapes in an unbiased, data-driven way (total N = 116 adults).

Self-portraits were similar to individuals’ real faces but, importantly, also contained clues to each person’s self-reported personality traits, which were reliably detected by external observers.

Furthermore, people with higher social self-esteem produced more true-to-life self-portraits. Unlike face portraits, body portraits had negligible relationships with individuals’ actual body shape, but as with faces, they were influenced by people’s beliefs and emotions.

We show how psychological beliefs and attitudes about oneself bias the perceptual representation of one’s appearance and provide a unique window into the internal mental self-representation—findings that have important implications for mental health and visual culture.