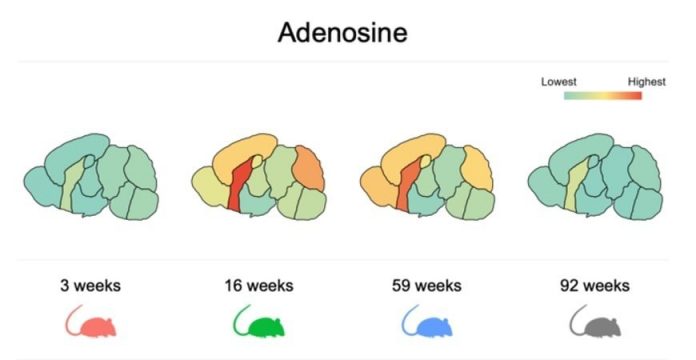 The first atlas of metabolites in the mouse brain has been published by a team led by UC Davis researchers. The dataset includes 1,547 different molecules across 10 brain regions in male and female laboratory mice from adolescence through adulthood and into advanced old age.

The work is published Oct. 15 in the Nature Communications.

The complete dataset is publicly available at https://mouse.atlas.metabolomics.us/.

“This is the largest metabolome analysis available on the brain, worldwide. It covers 1,547 identified metabolites, enabling analysis of many chemical conversions for energy, neurotransmitters or complex lipids in the brain,” said Professor Oliver Fiehn, director of the West Coast Metabolomics Center at the UC Davis Genome Center and senior author on the paper.

Metabolomics is the study of the chemical fingerprints of metabolism in living cells. It uses advanced high-throughput techniques to separate and identify all the different chemicals, or metabolites, present at a given time in a cell, tissue or organ. Alongside genomics, transcriptomics and proteomics, these techniques allow scientists to better understand what is happening inside cells and tissues.

The results show that the brain metabolome clearly is clearly distinct between large brain regions such as the brainstem, which controls vital functions such as breathing and blood pressure, from the cerebrum, which controls movements, speech and thinking, Fiehn said. In addition, specific sections showed high concentrations of metabolites associated with particular receptors, such as adenosine, ceramides and phospholipid ethers.

They did not find any significant metabolic differences between the brains male and female mice.

Metabolome of the aging brain

When the team compared animals of different ages, they found that overall, adult mice showed the greatest metabolic difference between brain sections. The differences between regions were less in adolescence and much less at very old ages.

“At very old age, energy functions appear to be less efficient, and the myelin sheaths that surround the axons, or wiring, of the brain change composition,” Fiehn said.

Lipid molecules especially showed large differences in aging and across brain regions. These lipids deserve specific investigation to see how they relate to changes in brain function, for example in signaling.

At very old age, the response system against oxidative stress becomes very active, while proteins start breaking down into peptides at an increased rate, he said. These changes are reflected in the metabolome.

The work was conducted in collaboration with the UC Davis Mouse Biology Program, led by Professor Kent Lloyd.

“This landmark paper clearly demonstrates the power of the laboratory mouse as a model to accelerate our understanding of brain metabolism, including and especially in humans,” Lloyd said.

Funding: The work was supported by grants from the National Institutes of Health.

About this brain mapping and aging research news

A metabolome atlas of the aging mouse brain

The mammalian brain relies on neurochemistry to fulfill its functions. Yet, the complexity of the brain metabolome and its changes during diseases or aging remain poorly understood.

Here, we generate a metabolome atlas of the aging wildtype mouse brain from 10 anatomical regions spanning from adolescence to old age.

We combine data from three assays and structurally annotate 1,547 metabolites. Almost all metabolites significantly differ between brain regions or age groups, but not by sex.

A shift in sphingolipid patterns during aging related to myelin remodeling is accompanied by large changes in other metabolic pathways. Functionally related brain regions (brain stem, cerebrum and cerebellum) are also metabolically similar.

We show that metabolic changes can be mapped to existing gene and protein brain atlases.

The brain metabolome atlas is publicly available (https://mouse.atlas.metabolomics.us/) and serves as a foundation dataset for future metabolomic studies.

Why does civil unrest spread between cities?