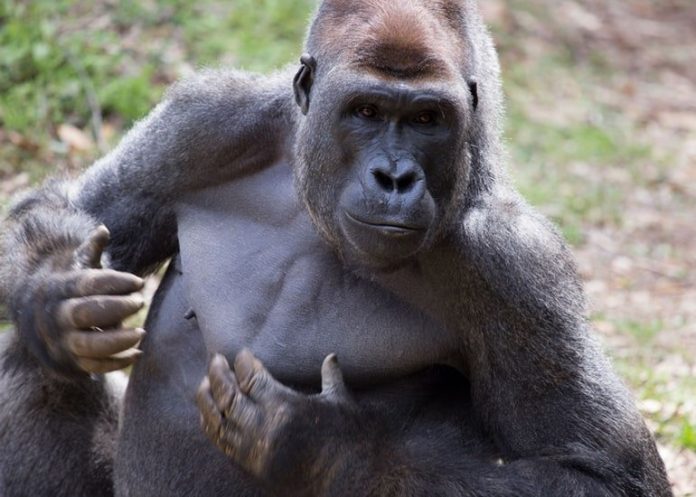 Summary: Gorillas not only recognize familiar human voices, they can also connect the voices to pleasant, or not-so-pleasant memories of the person.

Many animals recognize the voices of members of their own species, and some can even recognize those of other species, such as humans. But it turns out a few animals, such as gorillas, can not only recognize familiar voices but also connect those voices to pleasant or not so pleasant memories.

A new study from the University of Georgia is the first to show that gorillas are able to recognize familiar human voices based on their relationship with the speaker.

The researchers found that captive gorillas responded negatively when they heard the voices of people they didn’t know or with whom they’d had negative interactions. Their reaction indicates that the apes likely recognized who the voices belonged to and possibly the nature of their relationship with those individuals.

Although this project focused specifically on gorillas at Zoo Atlanta, the findings, published in the journal Animal Cognition, have wider implications for the captive animals’ wild cousins.

“I worked mostly with wild gorillas, and one downside of working with wild primates is that through the habituation process we could make them much more susceptible to hunters because they become used to seeing and hearing people,” said Roberta Salmi, lead author of the study and director of the Primate Behavioral Ecology Lab in the Franklin College of Arts and Sciences. “If they are actually able to distinguish between people, there is hope.”

A wide variety of animals appear to be able to recognize and differentiate between voices of their same species. But some can also do that with other species.

“Babies are able, for example, to recognize the voices of their mothers and their scent. That’s wired into animals,” Salmi said. “In the wild, we know that some monkeys also form specific associations with individuals of other species.”

It’s a survival tactic. If a monkey hears and recognizes the distress calls of a known individual, they know something is wrong and can try to hide or escape danger.

But whether undomesticated animals can recognize individual humans is a bit murkier.

Research has shown that dogs and cats can distinguish between their owner’s voice and the voices of others. They can even detect changes in tone—which is the real reason your dog looks so guilty after toppling the garbage can. Rover’s not actually guilt-stricken. But dogs and cats have been domesticated for centuries, creating a close bond between people and their companion animals.

Animals in proximity to people, such as crows, pigeons and even wild elephants, have also been shown to differentiate between voices that they were familiar with and those they weren’t. These studies suggest that being able to differentiate voices and assess the threat level may be important for animals with increased exposure to humans.

Salmi and her team noticed the gorillas responded negatively to the presence of specific people who came into their indoor enclosure. Specifically, the animals seemed to grow agitated at the presence of veterinarians and one maintenance worker. But it was unclear whether the animals were only reacting to visually seeing the people.

Apes may gauge threats by familiarity of human voices

Over the course of about six months, the team played the apes audio recordings of three groups: long-term keepers who knew and worked with the gorillas for at least four years and had positive relationships with them; people who the apes knew and had negative interactions with, including veterinarians and the maintenance worker; and people who were unfamiliar to the animals. All the participants said the same phrase, “Good morning. Hello,” which is how keepers typically greet the gorillas.

The apes had minimal reactions to the voices of their keepers. However, when they heard the voices of people they didn’t know or with whom they’d had negative experiences, the gorillas responded with signs of distress, such as increased vigilance and vocalizations.

“One of the first things we saw was something that also happens in the wild: If there’s any sound that seems threatening or unfamiliar, they stopped what they were doing and focused their attention on it,” Salmi said.

“It’s something we do too. If it’s not a threatening sound, I keep doing my own business. If I hear that there is someone in my house, I immediately stop what I’m doing to hear what’s going on.”

For gorillas, it’s the first sign of vigilance. After hearing unfamiliar voices or the voices of people with whom they’d had negative interactions, the apes in the study stopped eating their treats or whatever else they were doing and started looking toward the sound to gauge whether the voices were a threat. It was unclear whether the gorillas considered the strangers to be as threatening as the veterinarians and maintenance worker.

“Some primates are able to distinguish and have different reactions to humans, according to whether they are hunters or researchers,” Salmi said. “If wild gorillas are able to distinguish between people who behave differently, not only by sight but also by voice, it would be extremely helpful. It would help me sleep better to know that researchers aren’t making the gorillas more vulnerable to hunters.”

Caroline Jones, who received her doctorate from the Department of Psychology, and Jodi Carrigan, from Zoo Atlanta, are co-authors of the study.

About this animal cognition research news

Who is there? Captive western gorillas distinguish human voices based on familiarity and nature of previous interactions

The ability to recognize conspecifics by their acoustic signals is of crucial importance to social animals, especially where visibility is limited, because it allows for discrimination between familiar and unfamiliar individuals and facilitates associations with and the avoidance of particular conspecifics.

Animals may also benefit from an ability to recognize and use the information coded into the auditory signals of other species. Companion species such as dogs, cats, and horses are able to discriminate between familiar and unfamiliar human voices; however, whether this ability is widespread across vertebrates is still unknown.

Future studies should determine whether this is also the case in the wild, where interspecific associations with humans are less intense than they are in captive settings.

To Get Ahead as an Introvert, Act Like an Extravert. It’s Not as Hard...