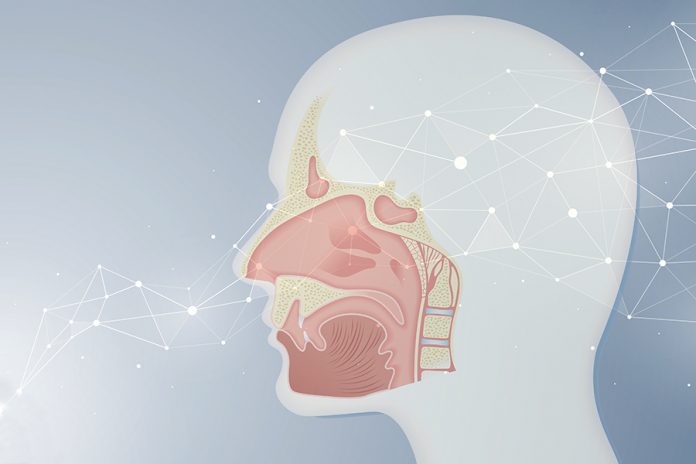 Using machine learning, a computer model can teach itself to smell in just a few minutes. When it does, researchers have found, it builds a neural network that closely mimics the olfactory circuits that animal brains use to process odors.

Animals from fruit flies to humans all use essentially the same strategy to process olfactory information in the brain. But neuroscientists who trained an artificial neural network to take on a simple odor classification task were surprised to see it replicate biology’s strategy so faithfully.

“The algorithm we use has no resemblance to the actual process of evolution,” says Guangyu Robert Yang, an associate investigator at MIT’s McGovern Institute, who led the work as a postdoctoral fellow at Columbia University. The similarities between the artificial and biological systems suggest that the brain’s olfactory network is optimally suited to its task.

Yang and his collaborators, who reported their findings October 6, 2021, in the journal Neuron, say their artificial network will help researchers learn more about the brain’s olfactory circuits. The work also helps demonstrate artificial neural networks’ relevance to neuroscience. “By showing that we can match the architecture [of the biological system] very precisely, I think that gives more confidence that these neural networks can continue to be useful tools for modeling the brain,” says Yang, who is also an assistant professor in MIT’s Departments of Brain and Cognitive Sciences and Electrical Engineering and Computer Science.

For fruit flies, the organism in which the brain’s olfactory circuitry has been best mapped, smell begins in the antennae. Sensory neurons there, each equipped with odor receptors specialized to detect specific scents, transform the binding of odor molecules into electrical activity. When an odor is detected, these neurons, which make up the first layer of the olfactory network, signal to the second-layer: a set of neurons that reside in a part of the brain called the antennal lobe. In the antennal lobe, sensory neurons that share the same receptor converge onto the same second-layer neuron. “They’re very choosy,” Yang says. “They don’t receive any input from neurons expressing other receptors.” Because it has fewer neurons than the first layer, this part of the network is considered a compression layer. These second-layer neurons, in turn, signal to a larger set of neurons in the third layer. Puzzlingly, those connections appear to be random.

For Yang, a computational neuroscientist, and Columbia University graduate student Peter Yiliu Wang, this knowledge of the fly’s olfactory system represented a unique opportunity. Few parts of the brain have been mapped as comprehensively, and that has made it difficult to evaluate how well certain computational models represent the true architecture of neural circuits, they say.

Neural networks, in which artificial neurons rewire themselves to perform specific tasks, are computational tools inspired by the brain. They can be trained to pick out patterns within complex datasets, making them valuable for speech and image recognition and other forms of artificial intelligence. There are hints that the neural networks that do this best replicate the activity of the nervous system. But, says Wang, who is now a postdoctoral researcher at Stanford University, differently structured networks could generate similar results, and neuroscientists still need to know whether artificial neural networks reflect the actual structure of biological circuits. With comprehensive anatomical data about fruit fly olfactory circuits, he says: “We’re able to ask this question: Can artificial neural networks truly be used to study the brain?”

Collaborating closely with Columbia neuroscientists Richard Axel and Larry Abbott, Yang and Wang constructed a network of artificial neurons comprising an input layer, a compression layer, and an expansion layer—just like the fruit fly olfactory system. They gave it the same number of neurons as the fruit fly system, but no inherent structure: connections between neurons would be rewired as the model learned to classify odors.

The scientists asked the network to assign data representing different odors to categories, and to correctly categorize not just single odors, but also mixtures of odors. This is something that the brain’s olfactory system is uniquely good at, Yang says. If you combine the scents of two different apples, he explains, the brain still smells apple. In contrast, if two photographs of cats are blended pixel by pixel, the brain no longer sees a cat. This ability is just one feature of the brain’s odor-processing circuits, but captures the essence of the system, Yang says.

It took the artificial network only minutes to organize itself. The structure that emerged was stunningly similar to that found in the fruit fly brain. Each neuron in the compression layer received inputs from a particular type of input neuron and connected, seemingly randomly, to multiple neurons in the expansion layer. What’s more, each neuron in the expansion layer receives connections, on average, from six compression-layer neurons—exactly as occurs in the fruit fly brain.

“It could have been one, it could have been 50. It could have been anywhere in between,” Yang says. “Biology finds six, and our network finds about six as well.” Evolution found this organization through random mutation and natural selection; the artificial network found it through standard machine learning algorithms.

The surprising convergence provides strong support that the brain circuits that interpret olfactory information are optimally organized for their task, he says. Now, researchers can use the model to further explore that structure, exploring how the network evolves under different conditions and manipulating the circuitry in ways that cannot be done experimentally.