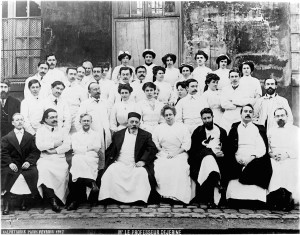 Neurology is as much defined by its diseases as by the people who named them. In many cases, it is a no brainer that Benjamin Duchenne described Duchenne muscular dystrophy, and that Charle’s Bell is linked to Bell’s palsy. Similarly, it goes without saying that Guido Werdnig and Johann Hoffmann defined Werdnig-Hoffmann disease, and that Sergei Korsakoff depicted Korsakoff’s psychosis. The same goes for Adolf Wallenberg and Wallenberg’s syndrome, and Augusta Dejerine Klumpke and Klumpke’s paralysis. The same applies to neurological clinical signs, with Moritz Romberg and Romberg’s sign, Henreich Rinne and Rinne’s test, Joseph Babinski and Babinski sign, and Joseph Brudzinski with Brudzinki’s sign.

But whilst we celebrate George Huntington, Alois Alzheimer, and James Parkinson for the syndromes that bear their names, we must remember that many diseases never got labelled with the names of their discoverers. Who, for example, defined narcolepsy and delirium tremens? This blog post is therefore an ode to the faceless and nameless neurology icons whose contributions are at risk of being forgotten in the mist of time. To inject some fairness into the naming game, here are 25 non-eponymous neurological diseases and the people who discovered, defined, or named them.

Let us then celebrate the pioneers…eponymous and anonymous alike.