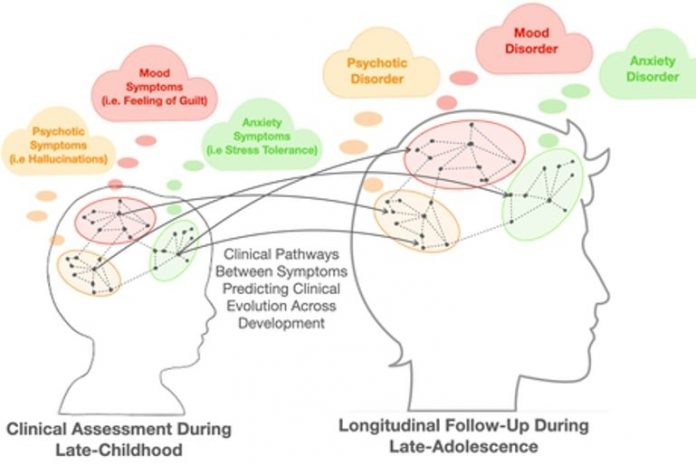 Summary: A new AI algorithm can successfully predict which children with microdeletion of chromosome 22 will develop schizophrenia and other mental health disorders later in life.

One third of children with a microdeletion of chromosome 22 will later develop a psychotic illness such as schizophrenia. But how do we know which of these children might be affected? Today, various studies have contributed to the understanding of the neurobiological mechanisms that are associated with the development of psychotic illnesses. The problem is that the ability to identify those at risk and adapt their treatment accordingly remains limited.

Indeed, many variables – other than neurobiological – contribute to their development. This is why a team from the University of Geneva (UNIGE) has joined forces with a team from the EPFL to use in a longitudinal manner an artificial intelligence tool:  the network analysis method.

This algorithm correlates many variables from different backgrounds – neurobiological, psychological, cognitive, etc. – over a period of twenty years, in order to determine which current symptoms are predictive of a psychotic illness in the child’s future developmental trajectory.

These results, to be read in the journal eLife, will enable early treatment of children deemed to be at risk of developing psychological disorders, with the aim of preventing or even avoiding them.

One in 4,000 people have a microdeletion of chromosome 22, which can lead to the development of psychotic illnesses, such as schizophrenia, in adolescence. However, only one third of them will eventually be affected by a psychotic disorder. How can we determine which ones?

“For the time being, the analyses are looking at the neurobiological mechanisms involved in psychological disorders, as well as the presence of certain symptoms that are assimilated to a psychological illness, without knowing which are the most relevant”, explains Corrado Sandini, a researcher at the Department of Psychiatry of UNIGE Faculty of Medicine, to the Fondation Pôle Autisme and first author of the study.

Not being able to take into account the degree of importance of each symptom can be problematic in predicting the course of the disease and providing the most appropriate treatment for the patient.

“This is why we thought of using the network analysis method”, he continues. This methodology, which is currently used on adults, makes it possible to combine variables from completely different worlds in the same analysis space, while considering them individually.

“Since the development of psychotic illnesses depends on many variables other than purely neurobiological ones, this algorithm would make it possible to highlight the most important symptoms to alert about the potential risks of a child becoming schizophrenic, for example”, says Stéphan Eliez, professor in the Department of Psychiatry at the UNIGE Faculty of Medicine and to the Fondation Pôle Autisme.

The Geneva team has joined forces with researchers at EPFL to develop this methodology and apply it to a cohort of children and adolescents suffering from a microdeletion of chromosome 22, some of whom have been followed for more than twenty years.

“The aim is to adapt network analysis by tailoring it to young patients in a longitudinal manner, in order to obtain insightful statistics on highly intertwined variables throughout the child’s developmental trajectory”, emphasises Dimitri Van De Ville, a professor in the Department of Radiology and Medical Informatics at UNIGE Faculty bof Medicine and at the EPFL Institute of Bioengineering. The aim is to find the variables in childhood that will foresay the development of psychotic illnesses.

“We will therefore know which battle to fight, thanks to key factors that will enable us to act where and, above all, when it is necessary”, explains Stéphan Eliez. “If we can identify them, we can try to regulate the symptom to reduce the risk of developing a psychotic illness later on.”

To test the methodology, 40 variables were taken into account for 70 children suffering from a microdeletion of chromosome 22, observed every three years from childhood to adulthood.

Visual representations then shed light/highlighted/determined the most important variables that predict the development of psychological problems three years later.

“We found that an anxious 10-year-old whose anxiety turns into an inability to cope with stress in adolescence is likely to develop a psychological illness. The evolution of anxiety is therefore a significant warning signal”, continues the Geneva researcher. Similarly, sadness, which over time becomes a feeling of guilt, is also a very important symptom.

A personalised method for each child

In order to confirm the results of their algorithm, the researchers applied it to other cohorts vulnerable to psychotic illnesses that have been followed for many years, and were thus able to confirm that the computer tool works. The aim is now to use it as a predictive tool, but also to refine it by integrating other variables, such as weight, to contribute to the clinical assessment.

Finally, the interest of this method is obviously the prediction, with the aim of avoiding the disease, but above all its fully personalised quality that studies the developmental trajectory specific to each child.

About this AI and schizophrenia research news

Network analysis techniques have emerged as alternative approaches that could help shed light on the complex dynamics of early psychopathology. The present study attempts to address the two main limitations that have in our opinion hindered the application of network approaches in the clinical setting.

Firstly, we show that a multi-layer network analysis approach, can move beyond a static view of psychopathology, by providing an intuitive characterization of the role of specific symptoms in contributing to clinical trajectories over time.

Secondly, we show that a Graph-Signal-Processing approach, can exploit knowledge of longitudinal interactions between symptoms, to predict clinical trajectories at the level of the individual. We test our approaches in two independent samples of individuals with genetic and clinical vulnerability for developing psychosis.

Novel network approaches can allow to embrace the dynamic complexity of early psychopathology and help pave the way towards a more a personalized approach to clinical care.

Safety and Efficacy of Eculizumab in Patients with Refractory Myasthenia Gravis