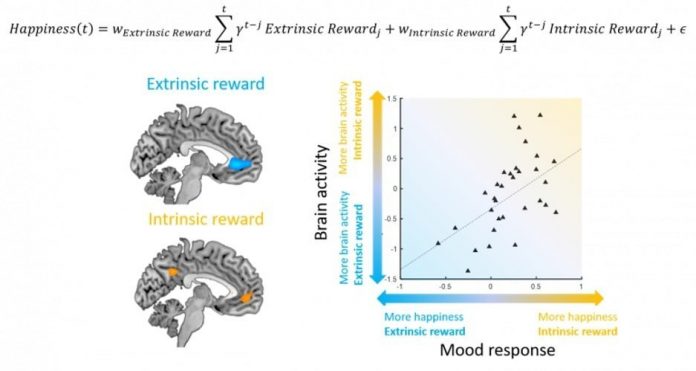 Summary: A new mathematical equation predicts which individuals will have more happiness and increased brain activity for intrinsic rather than extrinsic rewards. The approach can be used to predict personal preferences based on mood and without asking the individual.

A new study led by researchers at the Wellcome Centre for Human Neuroimaging shows that using mathematical equations with continuous mood sampling may be better at assessing what people prefer over asking them directly.

People can struggle to accurately assess how they feel about something, especially something they feel social pressure to enjoy, like waking up early for a yoga class.

How people really feel about something can be gleaned from their mood and their brain activity in reward regions, according to new research published in the Journal of Neuroscience.

The researchers measured participants’ brain activity with fMRI and their mood with repeated questions about how they felt as the participants earned two types of rewards.

First, participants chose a box to earn points tied to how much money they would earn at the end of the task, which is an example of an extrinsic reward. They then played a game where they navigated a cursor through on-screen barriers. This time they did not earn anything for playing the game beyond their own satisfaction in doing well – an example of an intrinsic reward.

The participants answered the same question about how they felt repeatedly throughout the study. Most people felt happier after earning more points or successfully navigating through the barriers but the contribution of either reward to happiness varied from person to person.

The research team developed a mathematical equation to determine how much intrinsic and extrinsic rewards contributed to the participants’ mood in a particular moment.

They found that people whose happiness was more swayed by intrinsic rewards had more activity in their ventromedial prefrontal cortex, a reward area, during intrinsic rewards compared to extrinsic rewards, and vice versa. These results provide a potential avenue to assess preferences without asking people outright.

Dr Bastien Blain, a Research Associate within the Centre’s Decision and Emotion team, who co-authored the study, said:

“Our mathematical equation lets us predict which individuals will have both more happiness and more brain activity for intrinsic compared to extrinsic rewards. The same approach can be used in principle to measure what people actually prefer without asking them explicitly, but simply by measuring their mood.”

“Over a century ago, Francis Edgeworth described an idealised instrument, which he called a hedonometer, for continually registering the height of pleasure experienced by an individual. Edgeworth’s idea is not actually as useful as it could be because you never know what it was that caused changes in happiness. Our ‘computational hedonometer’ can be used to tell how much people emotionally value experiences.”

A neurocomputational model for intrinsic reward

Standard economic indicators provide an incomplete picture of what we value both as individuals and as a society. Furthermore, canonical macroeconomic measures, such as GDP, do not account for non-market activities (e.g., cooking, childcare) that nevertheless impact well-being.

Here, we introduce a computational tool that measures the affective value of experiences (e.g., playing a musical instrument without errors).

We go on to validate this tool with neural data, using fMRI to measure neural activity in male and female human subjects performing a reinforcement learning task that incorporated periodic ratings of subjective affective state.

Traditional economic indicators are increasingly recognized to provide an incomplete picture of what we value as a society. Standard economic approaches struggle to accurately assign values to non-market activities that nevertheless may be intrinsically rewarding, prompting a need for new tools to measure what really matters to individuals.

Using a combination of neuroimaging and computational modeling, we show that despite their lack of instrumental value, intrinsic rewards influence subjective affective state and ventromedial prefrontal cortex activity.

The relative degree to which extrinsic and intrinsic rewards influence affective state is predictive of their relative impacts on neural activity, confirming the utility of our approach for measuring the affective value of experiences and other non-market activities in individuals.

When Your Feelings Are Too Dangerous