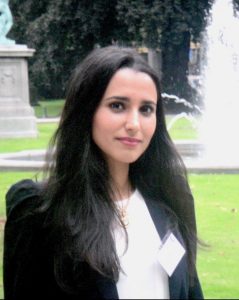 Aphasia resulting from stroke and brain injury creates a variety of language deficits, including a reduced ability to engage in conversations. And while researchers have investigated many aspects of this condition, little work has looked at the detailed characteristics of the words that aphasia patients are able to produce. In a new study, Reem Alyahya of King Fahad Medical City and Alfaisal University in Saudi Arabia and colleagues sought to change that.

“I have had the pleasure of working with people with aphasia since I qualified as a speech and language pathologist over 14 years ago,” says Alyahya, who is also a visiting scientist at the University of Cambridge. “To provide the best patient care, I have always kept myself up to date with evidence related to language and cognitive deficits, but I increasingly realized that there is so much that we do not know.” She thus pursued graduate and postgraduate work in neuroscience to help contribute to the field.

Building on previous work she and colleagues did that showed that speech production is underpinned by verbal quantity, verbal quality, and moto search, “the properties of the words used during discourse production by people with aphasia have never been compared to the properties of the words used by healthy controls,” she says. Publishing in the Journal of Cognitive Neuroscience, Alyahya and colleagues found that while they could produce fewer words, aphasia patients produced a similar complexity and diversity of words as people in a healthy control group.

I spoke with Alyahya about these results, their clinical significance, and future areas of research in this area.

Alyahya:  It was exciting and striking to discover that discourse production in aphasia has relatively preserved lexical–semantic complexity despite a compromised quantity of content word production. This pattern was consistent across the entire range of persons with aphasia, including fluent and nonfluent subgroups, as well as subgroups with different levels of semantic and phonological abilities. It was unexpected to find that the lexical–semantic complexity of word production during connected speech by persons with aphasia directly mirrored healthy control performance given that people with aphasia produce fewer words than healthy controls. This is unlike other disorders, such as semantic dementia where individuals mainly use high-frequency words.

Alyahya: We used a distributional analysis approach to create a two-dimensional “lexical–semantic landscape” that represents the words produced during discourse. This approach was sensitive enough to capture subtle changes between the two groups including any reduction in the overall number of words produced during discourse and/or any changes in the shape of the lexical–semantic landscape.

Additionally, while previous studies have tended to use a single stimulus to assess the nature and neural correlates of discourse production, we explored the effect of using different stimuli (composite picture description, storytelling narrative, and procedural discourse) on connected speech production. We found that storytelling narrative boosted connected speech production by eliciting a greater quantity and diversity of word class, and the full range of word frequency and imageability. This result might have been overlooked or considered less robust if only a single discourse stimulus had been used.

CNS: What is the significance of these findings for cognitive neuroscientists?

Alyahya: The contrastive clinical profiles between aphasia and semantic dementia can be explained in relation to classical models of spoken language production. Semantic dementia might reflect impairment at the conceptualization phase of language production, whereas aphasia might reflect breakdown either at access to or after the conceptualization stage of the language production pathway and/or in other aspects of fluent connected speech, such as in the mechanisms controlling phrasal construction or the interface between lexical retrieval and sentence formation.

Preservation of conceptual input in aphasia presumably means that persons with aphasia attempt to sample the entire breadth of the lexical–semantic landscape but the likelihood of any of these target words being produced is made less likely by post-conceptual production deficits. This conclusion would seem to align with an observation that many persons with aphasia state ‘know what they want to say but cannot produce it’. Furthermore, our neuroimaging findings revealed that shared left frontal regions were associated with word retrieval during discourse production, irrespective of their word class or lexical–semantic complexity. This implies that interventions, such as noninvasive brain stimulation, can target these left frontal brain regions to enhance word retrieval regardless of the word’s class or complexity.

CNS: What are the clinical implications?

Alyahya: Based on these findings, I would recommend that aphasia therapy should target improving word retrieval not only at naming and single-word level but also during discourse production. Furthermore, most clinical assessment tools that are used to examine language production rely heavily on single word naming and picture description, which are not everyday forms of communication. Results from this study indicate that picture-supported storytelling narrative, which is not commonly used in clinical practice, can be used to boost connected speech production by eliciting a greater quantity and diversity of words across all classes and the full range of word frequency and imageability. For clinical assessments, this is important as other commonly utilized discourse elicitation stimuli might underestimate language production abilities and the range of words used by patients.

Alyahya: The next step is to determine whether the findings from this study of English-speaking people with aphasia holds in other languages. My current research is exploring the features of connected speech production in Arabic-speakers with aphasia.

Relatedly, I am working on developing sensitive yet efficient measures of connected speech and discourse production that can be used to shorten and improve the effectiveness of the assessment process during clinical practice. This is critical because existing methods of assessing connected speech ability are extremely time-consuming, and thus it is not feasible to utilize them during routine clinical practice.

Comparative pharmacovigilance assessment of mortality with pimavanserin in Parkinson disease-related psychosis » Department of...

Polydrugged With 12 Different Drugs… For Insomnia