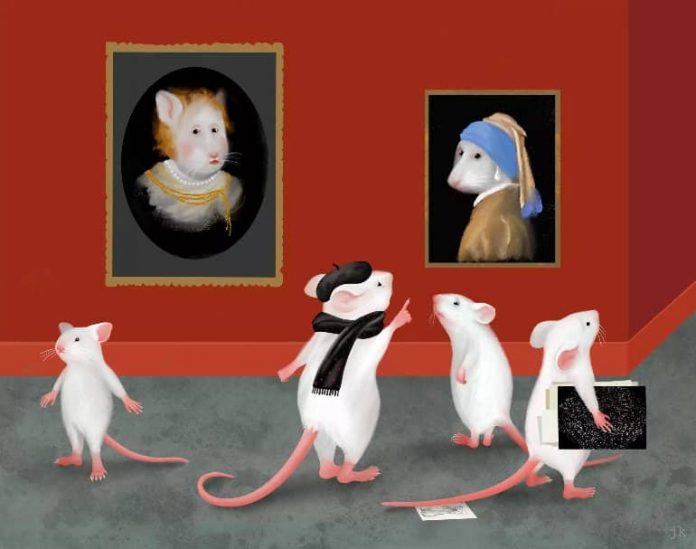 Summary: Study finds part of the category knowledge is already present in the early visual brain areas, revealing how widespread semantic memories are stored throughout the brain.

Is it a Rembrandt or a Vermeer? For lay people, it is often challenging to distinguish paintings by these two old masters. For the trained eye of an expert, on the other hand, it is not difficult at all. Scientists at the Max Planck Institute of Neurobiology have now demonstrated that mice can also become experts in sorting images into categories. The study shows that part of the category knowledge is already present in early visual areas, highlighting how widespread such semantic memories are stored throughout the brain.

Have you ever tried to distinguish a painting by Rembrandt from one by Vermeer? It could certainly seem like a guessing game: the differences are subtle to an untrained eye. An art enthusiast, however, has no problem with the classification – even though there are few clues that can be generally applied. How is that possible?

Semantic memory is a store for expert knowledge

One key to success is practice. Art experts look at hundreds of paintings day in and day out. They gradually develop a sense of the features playing a role in the discrimination. This sense is nothing but acquired knowledge, which is stored in their semantic memory. This type of memory contains all abstract information that is not linked to a specific experience: for example, the general fact that Vermeer is a Dutch painter – in contrast to the exact memory of where they first saw a Vermeer painting.

To date, however, we know little about how semantic memory is stored in the brain. Pieter Goltstein, neurobiologist working with Mark Hübener in Tobias Bonhoeffer’s department, explains: “To study how such information is stored, we first need to know where to find it in the brain. We came up with the idea to give mice a task similar to those of art experts, and test if the animals can also acquire such complex knowledge.”

Together with Sandra Reinert, Pieter Goltstein showed mice different pictures of stripe patterns, which they had to sort into two categories. To do so, the animals had to weigh different aspects of the stripes and include both their width and their orientation.

Surprisingly, after an initial learning phase, the mice had no trouble in sorting the patterns into the correct category. They had become experts and could readily apply their newly learned category knowledge to patterns that they had not seen during learning yet – extrapolating from the category features that they had stored as semantic information.

The visual cortex helps to categorize

But is the category information already stored in the visual cortex, where visual stimuli arrive and are represented? Or is it only found after many initial processing steps, in some higher brain area?

The scientists used a little trick to answer this question: Since neurons in the visual cortex react to visual stimuli in a particular location, they initially trained the mice using stripe patterns shown only in a part of their visual field. In this way, only a specific group of neurons were trained in these animals.

When the researchers then shifted the patterns to another location, and therefore stimuli were processed by different neurons, the mice could not categorize as well anymore. Inactivating the visual cortex led to a similar outcome. Together, these results indicated that neurons in the visual cortex are involved in the task of category learning.

Signatures of semantic memories are already found in the visual cortex

In parallel to the category training, the scientists were able to repeatedly measure the activity of many neurons and identify changes over the course of learning. Interestingly, toward the end of the learning process, some regions of the visual cortex became better in distinguishing categories.

Mark Hübener, senior author of the study, explains: “The neurons in these regions receive two kinds of input. They respond to a specific visual stimulus, and they also receive information when the mouse sorts an image into the correct category. This allows the neurons to identify important visual stimuli related to categories, and enhance their reaction to them.”

Neurons in the visual cortex are thus able to adapt their response during learning. But not only that: Analyzing the data, a region of the visual cortex, called POR, stood out in particular. There, the researchers found signs of stored abstract category information. The study thereby tracks down that abstract learning already begins at the first levels of visual processing.

Associative memories are stored in distributed networks extending across multiple brain regions. However, it is unclear to what extent sensory cortical areas are part of these networks.

Using a paradigm for visual category learning in mice, we investigated whether perceptual and semantic features of learned category associations are already represented at the first stages of visual information processing in the neocortex. Mice learned categorizing visual stimuli, discriminating between categories and generalizing within categories.

Inactivation experiments showed that categorization performance was contingent on neuronal activity in the visual cortex. Long-term calcium imaging in nine areas of the visual cortex identified changes in feature tuning and category tuning that occurred during this learning process, most prominently in the postrhinal area (POR).