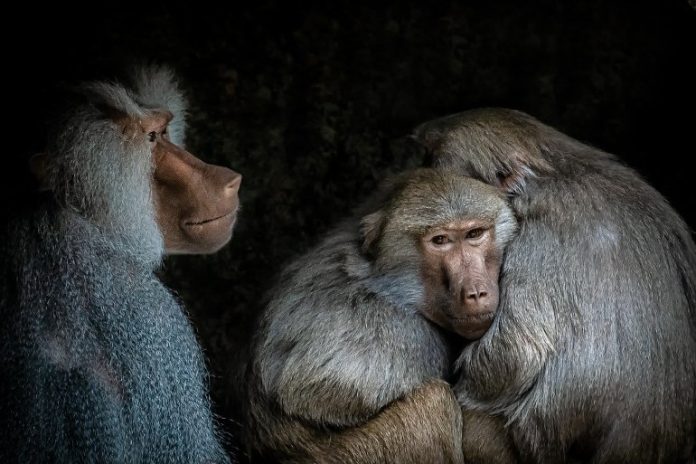 Summary: Studying 50 species of primates, researchers found 80% of the species studied performed corpse carrying behaviors as a way to process grief. Following the loss of an infant, some primate mothers carried the body for up to four months following death.

Some primate species may express grief over the death of their infant by carrying the corpse with them, sometimes for months, according to a new UCL-led study – with implications for our understanding of how non-human animals experience emotion.

Published today in Proceedings of the Royal Society B, the researchers compiled data from anecdotes reported in 126 publications on primate behaviour. In the largest study of its kind, researchers undertook the most extensive and rigorous quantitative analysis to date of a behaviour known as “infant corpse carrying” in primate mothers, looking at 409 cases across 50 species.

While there is debate among scientists around whether primates are aware of death, this new study suggests that primate mothers may possess an awareness – or be able to learn about death over time.

Study co-author Dr Alecia Carter (UCL Anthropology) said: “Our study indicates that primates may be able to learn about death in similar ways to humans: it might take experience to understand that death results in a long-lasting ‘cessation of function’, which is one of the concepts of death that humans have. What we don’t know, and maybe will never know, is whether primates can understand that death is universal, that all animals – including themselves – will die.

“Our study also has implications for what we know about how grief is processed among non-human primates. It’s known that human mothers who experience a stillbirth and are able to hold their baby are less likely to experience severe depression, as they have an opportunity to express their bond. Some primate mothers may also need the same time to deal with their loss, showing how strong and important maternal bonds are for primates, and mammals more generally.”

Overall, 80% of the species in the study were found to perform corpse carrying behaviour. Although widely distributed across the primate order, the behaviour was found to most frequently occur in great apes and Old World monkeys, who also carried their infants after death for the longest durations.

The team found that the primate species was a strong determinant of whether bodies of infants were carried; primates that diverged long ago, such as the lemurs, did not carry infant bodies after death, but were still found to express grief through other behaviours, such as returning to the corpse or giving “mother-infant contact calls”.

Both the age of the mother at the time of the infant’s death and the way in which the infant died were found to influence the likelihood of infant corpse carrying. The researchers found that younger mothers were more likely to carry their infants after death, while traumatic deaths, such as infanticides or accidents, were less likely to result in corpse carrying compared to deaths caused by non-traumatic events, such as illness.

The study also revealed that among those species that carry their dead infants, the length of time spent carrying the corpse varied depending on the strength of the mother-infant bond, indicated by the age of the infant at the time of their death; infants were carried for longer when they died at younger ages, with a sharp decline when they reached approximately half the weaning age.

Study co-author Elisa Fernández Fueyo (UCL Anthropology) said: “We show that mothers that were more strongly bonded to their infant at death carry the corpse for longer, with emotions possibly playing an important role. However, our study also shows that, through experience with death and external cues, primate mothers may gain better awareness of death and therefore ‘decide’ not to carry their dead infant with them, even if they may still experience loss-related emotions.

“We found that bonds, particularly the mother-infant bond, possibly drive primates’ responses to death. Because of our shared evolutionary history, human social bonds are similar in many ways to those of non-human primates. Therefore, it is likely that human mortuary practices and grief have their origins in social bonds. The thanatological behaviours that we see in non-human primates today may have been present in early human species as well – and they may have transformed into the different rituals and practices during human evolution.

“However, we need more data to enable us to further develop our understanding of this, and of how much primate behaviours relating to death may not only be explained by bonds but also by the associated emotions and, thus, resemble human grief.”

The study authors acknowledge that their study may have several limitations, due to the unsystematic recording of thanatological behaviour. To address this, they have launched the website ThanatoBase, which invites researchers to contribute their own observations to a ‘living database’ of non-human primate death – and aims to help address fundamental questions about the evolution of animal cognition and emotion.

About this animal psychology research news

Original Research: Closed access.
“Why do some primate mothers carry their infant’s corpse? A cross-species comparative study” by Alecia Carter et al. Proceedings of the Royal Society B: Biological Sciences

Why do some primate mothers carry their infant’s corpse? A cross-species comparative study

Non-human primates respond to the death of a conspecific in diverse ways, some of which may present phylogenetic continuity with human thanatological responses. Of these responses, infant corpse carrying by mothers (ICC) is the most frequently reported. Despite its prevalence, quantitative analyses of this behaviour are scarce and inconclusive.

We compiled a database of 409 published cases across 50 different primate species of mothers’ responses to their infants’ deaths and used Bayesian phylogenetic regressions with an information-theoretic approach to test hypotheses proposed to explain between- and within-species variation in ICC. We found that ICC was more likely when the infant’s death was non-traumatic (e.g. illness) versus traumatic (e.g. infanticide), and when the mother was younger.

These results support the death detection hypothesis, which proposes that ICC occurs when there are fewer contextual or sensory cues indicating death. Such an interpretation suggests that primates are able to attain an awareness of death. In addition, when carried, infant age affected ICC duration, with longer ICC observed for younger infants. This result suggests that ICC is a by-product of strong selection on maternal behaviour.

The findings are discussed in the context of the evolution of emotion, and implications for evolutionary thanatology are proposed.

Today Would Have Been our 2020 Bellingham Brain Cancer Walk….

Misperception of Sleep Quality Is Common in Patients With Insomnia