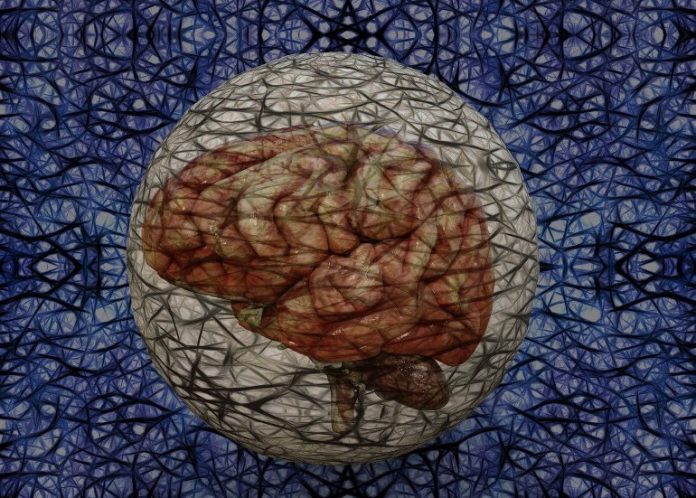 Summary: Cholesterol produced by astrocytes in the brain is required for the production of amyloid-beta. The findings shed light on how and why amyloid-beta forms, and may explain why genes associated with cholesterol have been implicated as risk factors for Alzheimer’s disease.

Cholesterol manufactured in the brain appears to play a key role in the development of Alzheimer’s disease, new research indicates.

Scientists from the University of Virginia School of Medicine and their collaborators found that cholesterol produced by cells called astrocytes is required for controlling the production of amyloid beta, a sticky protein that builds up in the brains of patients with Alzheimer’s. The protein accumulates into insoluble plaques that are a hallmark of the disease. Many efforts have targeted these plaques in the hope that removing or preventing them could treat or prevent Alzheimer’s.

The new findings offer important insights into how and why the plaques form and may explain why genes associated with cholesterol have been linked to increased risk for Alzheimer’s. The results also provide scientists with important direction as they seek to prevent Alzheimer’s.

“This study helps us to understand why genes linked to cholesterol are so important to the development of Alzheimer’s disease,” said researcher Heather A. Ferris, MD, PhD, of UVA’s Division of Endocrinology and Metabolism. “Our data point to the importance of focusing on the production of cholesterol in astrocytes and the transport to neurons as a way to reduce amyloid beta and prevent plaques from ever being formed.”

While cholesterol is often associated with clogged arteries and heart disease, it plays important roles in the healthy body. The body makes cholesterol naturally so it can produce hormones and carry out other important functions. The new discovery from Ferris and her collaborators adds a new entry to cholesterol’s list of responsibilities.

The work also sheds light on the role of astrocytes in Alzheimer’s disease. Scientists have known that these common brain cells undergo dramatic changes in Alzheimer’s, but they have been uncertain if the cells were suffering from the disease or contributing to it. The new results suggest the latter.

Normally, cholesterol is kept quite low in neurons, limiting the buildup of amyloid beta. But in Alzheimer’s, the neurons lose their ability to regulate amyloid beta, resulting in plaque formation.

Blocking the astrocytes’ cholesterol manufacturing “robustly” decreased amyloid beta production in lab mice, the researchers report in a new scientific paper. It’s too soon to say if this could be mimicked in people to prevent plaque formation, but the researchers believe that further research is likely to yield important insights that will benefit the battle against Alzheimer’s.

The fact that amyloid beta production is normally tightly controlled suggests that it may play an important role in brain cells, the researchers say. As such, doctors may need to be careful in trying to block or remove amyloid beta. Additional research into the discovery could shed light on how to prevent the over-production of amyloid beta as a strategy against Alzheimer’s, the researchers believe.

“If we can find strategies to prevent astrocytes from over-producing cholesterol, we might make a real impact on the development of Alzheimer’s disease,” Ferris said. “Once people start having memory problems from Alzheimer’s disease, countless neurons have already died. We hope that targeting cholesterol can prevent that death from ever occurring in the first place.”

Regulation of beta-amyloid production in neurons by astrocyte-derived cholesterol

In vitro evidence suggests that apoE links to Aβ production through nanoscale lipid compartments (lipid clusters), but its regulation in vivo is unclear. Here, we use superresolution imaging in the mouse brain to show that apoE utilizes astrocyte-derived cholesterol to specifically traffic neuronal amyloid precursor protein (APP) in and out of lipid clusters, where it interacts with β- and γ-secretases to generate Aβ-peptide.

We find that the targeted deletion of astrocyte cholesterol synthesis robustly reduces amyloid and tau burden in a mouse model of AD. Treatment with cholesterol-free apoE or knockdown of cholesterol synthesis in astrocytes decreases cholesterol levels in cultured neurons and causes APP to traffic out of lipid clusters, where it interacts with α-secretase and gives rise to soluble APP-α (sAPP-α), a neuronal protective product of APP. Changes in cellular cholesterol have no effect on α-, β-, and γ-secretase trafficking, suggesting that the ratio of Aβ to sAPP-α is regulated by the trafficking of the substrate, not the enzymes.

How Should Psychedelic Medicine Handle “Flashbacks”?