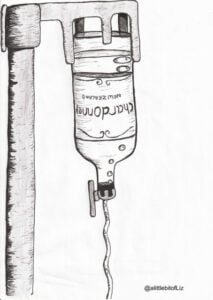 Imagine if, after leaving your house to run some errands, you were mugged. It would be pretty normal for you to feel anxious every time you need to leave the house after that! But after a while, you decide that you shouldn’t feel that anxious about it—muggings are very rare and it was just incredibly bad luck. Maybe you see a TV ad that says “If you feel anxious, you should talk to your doctor.” So you go to your GP for help, and the doctor diagnoses you with ‘Lack of Alcohol Disorder’ (LAD). Sounds far-fetched, but bear with us!

Your GP knows that LAD exists, because research has shown that people who drink alcohol tend to feel less anxious and more confident. When anxious people are given moderate amounts of alcohol, lab studies show they feel calmer. Therefore, lack of alcohol must be the problem: it is why you are feeling anxious. LAD is more commonly present in women, ethnic minorities, and people who have survived trauma. It is associated with the DRD2 dopamine pathway in the brain—after all, brain scans have shown that alcohol affects this pathway.

Initially, to treat your LAD, you are prescribed a shot of vodka every time you need to leave the house. This seems to work. After two months however, your tolerance has increased, and the alcohol doesn’t work as well. You are prescribed more and more alcohol by the GP to treat the increasing severity of your LAD (rather than increased drug tolerance). You struggle to concentrate, to go to work, and you gain a lot of weight—however, at least you can leave the house.

Eventually, however, you don’t like the medication side effects (nausea, dizziness, impulsivity, you can’t drive while taking it, and of course the headaches and lethargy in the morning before your daily dose) and you ask your GP to come off the alcohol. They do this cold turkey: You stop taking the prescribed alcohol but feel intensely sweaty, nauseous, shaky and incredibly anxious leaving the house again. Instead of recognising this as alcohol withdrawal, the GP explains that you must have chronic LAD, and unfortunately you will have to drink alcohol every day for the rest of your life. It may shorten your lifespan, but it is worth it to treat your LAD. You are offered a support worker who can help you try to do your shopping, and a community nurse who will help you monitor your symptoms and side effects.

Another way of looking at this situation is that alcohol can lower our inhibitions, and even make us feel relaxed and safe, which might make leaving the house easier. But “lack of alcohol” was never the actual problem. Obviously, this is an exaggerated example, but it is an almost exact parallel to how we view drugs like antidepressants and “disorders” like depression.

The whole (now debunked) “chemical imbalance” theory of depression was developed because someone noticed that the drugs now called “antidepressants” worked on the serotonin system, impairing the reuptake of serotonin so that more of it remained in the synaptic cleft. So, the theory went, people who need antidepressants must have low serotonin (just as in our example, you are theorized to have alcohol levels that are too low). But, unfortunately for this theory, research never demonstrated such a serotonin deficiency, and in fact experiments showed that just impacting the serotonin system did not cause or relieve depression.

Likewise, antidepressants may cause a chronic, long-term depression (instead of what was once a time-limited experience). And they have significant withdrawal effects, which can last for months or years and look a lot like “depression.” Researchers have found that these effects are often mistaken for a return of the original depression, even though they are often worse or different from the symptoms which first brought a person to the psychiatrist.

In our example, the doctor mistakes alcohol withdrawal for a return of the “Lack of alcohol disorder.” It seems far-fetched that a doctor could make that mistake. But doctors make the exact same mistake all the time when it comes to withdrawal from psychiatric drugs.

Worse still, in our example, with all the focus on the “treatment” of LAD, the original problem, the reason you felt anxious when leaving the house, was never addressed. That’s the same too—your GP or psychiatrist will give you a prescription for a drug, but they won’t address why you felt anxious or depressed. (A whole separate field is devoted to exploring why you might feel that way and how to change it; it’s called “psychology.”)

You may be someone who has found antidepressants incredibly helpful. We are certainly not trying to invalidate your experience. Just because these drugs make some people feel better at times, doesn’t mean we have to accept that the drugs will help everyone, or that the people who are helped by such drugs are ‘mentally ill’. After all, alcohol works—relieving anxiety, making you more social, lowering your inhibitions so you can leave the house! But that obviously doesn’t mean it should be considered the medical solution for anxiety.

Considering this hypothetical example, it is not hard to see how one could find themselves in a negative relationship with substances that provide temporary relief, such as alcohol, or in the medical world, benzodiazepines or opioids.

One critique of the medical model is that society has a negative perception of ‘self-medication’ but the same substances are readily prescribed by healthcare professionals as treatments. For example, college students using Adderall or Ritalin to focus on studying before a big test or to write a paper is frowned upon, but if a doctor prescribes the same drugs (amphetamines) to children to improve their schoolwork, it is considered beneficial.

Another example: Drugs that were once considered “recreational” drugs, their use criminalized (ketamine, psilocybin, even marijuana) are now being prescribed as “treatments” for a variety of psychiatric diagnoses, including anxiety, depression, and PTSD.

At this point, you should be noticing that psychiatry’s biological treatments (drugs) have the same basis in science and the same underlying assumptions as self-medicating with alcohol. And they may work in some ways, just as alcohol “works.” (After all, people wouldn’t use it so much if it didn’t feel good!) But they don’t resolve the underlying issues that cause people to feel distressed, they come with a great many negative effects, and they can be very hard to discontinue.

However, if there was a shift in the paradigm (if we could adopt the paradigm that Emotions aRe Not Illnesses) then this would change the way we view ‘mental illness’ and as a result it would change our response. We might start looking for the cause of distress instead of just tranquilizing the symptoms.

American philosopher Thomas Kuhn first introduced the notion of ‘paradigm shift’. Science doesn’t gradually converge towards a universal truth. Instead, it goes through phases. A paradigm shift happens when a fundamentally new way of thinking and conceptualising the world better explains the evidence available, something incompatible with the original beliefs. Generally, the paradigm shift happens upon the increasing weight of new evidence that simply cannot be assimilated into the current way of thinking.

Psychiatrist Thomas Szasz suggested that diagnostic categories for mental illness diagnosis are only a metaphor, like drawing constellations in the sky: the stars are there, and they are very real, however the way that we draw our constellations is essentially a social construction. The ‘symptoms’ of the things we sometimes call ‘mental illness’ are real. The very concrete, and at times life-threatening, impact of distress on people’s emotions, thoughts, behaviour and body, is real. However, Szasz argued that the ‘illness’ paradigm of understanding this distress can be actively harmful.

Many in the mental health field consider themselves to be “integrative”; psychiatrists often espouse a bio-psycho-social paradigm. Nonetheless, they invariably situate mental ‘illness’ within biomedicine and explain it as a “complex” biological mechanism (as yet undiscovered) that “we believe” involves genetics, neurotransmitters, hormones, and even immune functioning .  Social influences like poverty, homelessness, discrimination, racism, and sexism are considered, at most, “triggers” for a biological illness. Non-medical options like psychotherapy are considered to be ways of managing this biological problem, rather than ways of explaining and addressing the cause of legitimate distress.

A real paradigm shift would be more than continuing to give diagnosis and drugs whilst ‘integrating’ psychological, social and cultural ‘factors’ or ‘acknowledging’ socio-political and historical context. We contend that any diagnosis-inspired models with the words ‘include’, ‘integrate’, and ‘acknowledge’ in relation to cultures, social life, personal history, community, and relationships, are not paradigm shifts.

The very concept and language of individual ‘mental health’ is part of the medical paradigm. Approaches which accommodate community, personal narratives, stories, and meaning, but which accept diagnostic categories or an illness/biological understanding of distress, do in fact sit nicely within the existing medical paradigm. We need to change something deeper, more wider-reaching, more fundamental about the way we look at human distress. We do need a new paradigm.

The medical paradigm suggests an ‘us’ (well) and ‘them’ (ill) dichotomy. Mental health research, therefore, focuses on the views of ‘professionals’, those with advanced degrees in the subject. “Service users,” if considered at all, are thought to lack credibility and their views are usually discounted. Even professionals with lived experience are often dismissed with the argument that their experience with the very subject under discussion compromises their “objectivity” (or simply makes them “crazy”).

What is needed are genuinely co-created narratives where, if professional views are even useful, the lived (and life) experience of the person with distress is the strongest and most credible ‘evidence’ for what might help them feel better. Where co-created narratives include professional support, they should emphasise social, historical, political and community factors. This isn’t to eschew the training of professionals (for example, listening skills and evidence-based techniques to manage distress). However, these skills should be situated within a helpful, and more human, paradigm.

Do we have a singular perfect alternative? Of course not. There is a real danger, in this commoditised point in history, that critiquing the paradigm imposes a pressure on ‘powerful people’ to come up with a succinct and sellable alternative.

That doesn’t mean we shouldn’t work towards change—and work has already been done. The Power Threat Meaning Framework (PTMF), for example, takes a human-rights focussed approach to distress, based on the meaning that people make of adversities they have faced and their response to these adversities. It also considers their strengths. The PTMF acknowledges that diagnosis is imposed on those seeking support, further reinforcing their feelings of shame, of being different and somehow “disordered”.  This denies people the opportunity to create their own narrative, with which they could make sense of what has happened to them.

One of the aims of the PTMF is to be used to construct service design and policy based on the ideas of those with lived experience rather than professional “theorizing.” The PTMF acknowledges it is not the perfect solution, but provides the foundation on which to build. Perfect or not, this is what a paradigm shift might look like.

The PTMF proposes a paradigm shift from “what is wrong with you?” to “what has happened to you?” This immediately shifts the selected response. We propose that emotions are not illnesses, and therefore, the solutions to human distress are human. It’s in our communities, it’s in our relationships, and it’s in the way we make sense of things together.