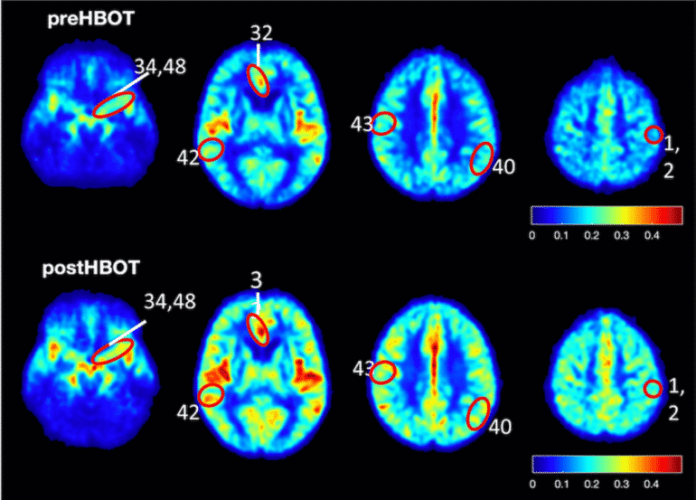 A team of investigators from Tel Aviv University has succeeded in restoring brain trauma by hyperbaric oxygen therapy (HBOT). This is the first time in the scientific world that non-drug therapy has been proven effective in preventing the core biological processes responsible for the development of Alzheimer’s disease.

The study, part of a comprehensive research program directed toward aging and accompanying ailments as a reversible disease, holds promise for a new strategic approach to the prevention of Alzheimer’s by addressing not only the symptoms or targeting biomarkers, but rather the core pathology and biology responsible for the development of the disease.

The study was conducted under the leadership of a team of investigators from Tel Aviv University: Prof. Shai Efrati, Prof. Uri Ashery, Dr. Ronit Shapira, Dr. Pablo Blinder and Dr. Amir Hadanny. They are members of the Sagol School of Neuroscience, the George S. Wise Faculty of Life Sciences, and the Sackler Faculty of Medicine at Tel Aviv University as well as from the Shamir Medical Center.

The findings of the breakthrough study were published in the respected journal Aging.

Hyperbaric medicine is a form of therapy that requires patients to be kept in special chambers in which the atmospheric pressure is much higher than that normally experienced at sea level. In addition, they breathe air composed of 100% oxygen.

Hyperbaric medicine is considered safe and already serves to treat an extensive list of medical conditions – also here in Israel. In recent years, scientific evidence has indicated that unique protocols of hyperbaric therapy are capable of inducing repair of damage brain tissue and renewed growth of blood vessels and nerve cells in the brain.

The first stage of the study was carried out on an animal model, in the course of which it was proven conclusively through examination of brain tissues that a certain therapeutic protocol brings about an improvement in vascular function and the creation of new blood vessels.

It also prevents the deposit of new amyloid plaques on the brain cells and even leads to the removal of existing amyloid plaque deposits. Amyloids are non-soluble proteins. Deposits of such proteins  in the brain are connected with severe degenerative conditions such as Alzheimer’s disease.

At the next stage, the effects of the treatment were examined for people above the age of 65 with cognitive decline, with an emphasis on memory loss – a stage preceding Alzheimer and Dementia. The therapy included a series of 60 session of HBOT unique in pressure chambers over a period of 90 days. The effects on the brain were evaluated by high resolution perfusion MRI.

The hyperbaric treatment protocol gave rise to: increased blood flow in the range of 16%-23%; significantly improved in memory by 16.5% on average, significant improvement in attention and information processing speed.

Prof. Uri Ashery explains, “By studying and treating Alzheimer’s disease in the animal model, we can implement our findings to include humans as well. After a series of hyperbaric treatments, elderly patients who were already suffering from memory loss showed an improvement of blood flow to the brain – as well as a real improvement in cognitive performance.

“Consequently, we succeeded in demonstrating the latent potential of hyperbaric medicine for treatment of neurologic conditions that originate from hypoxia – that is to say,  a deficiency of oxygen reaching the cells”.

Dr. Pablo Blinder says, “This breakthrough was enabled thanks to a new research approach that employs multi-photon microscopes. This allowed us to follow up improvements in indices taken from animal models before and after each chamber treatment. At the same time, we check blood vessel diameters and the formation of amyloid plaques in their brains”.

Dr. Ronit Shapira adds, “The combination of an animal model from which we could learn the pathology of the disease, together with existing and available therapy, raises the hope that we will now be able to fight one of the greatest challenges to the western world. According to our findings, hyperbaric therapy given at a young age is likely to prevent this severe disease entirely”.

Prof. Shai Efrati sums up the team’s findings, “By treating the root problem that causes cognitive deterioration with age, we are in fact mapping out the way to prevention. It is likely that hyperbaric medicine can potentially provide the opportunity for living with good brain function without relating to chronological age. The idea is to commence therapy before the onset of clinical symptoms of Dementia and before deterioration and loss of extensive brain tissue.

“This is the stage at which blood vessels become occluded and the blood flow and the oxygen supply to the brain are diminished – a phenomenon that can already take place at a relatively early age”.

Vascular dysfunction is entwined with aging and in the pathogenesis of Alzheimer’s disease (AD) and contributes to reduced cerebral blood flow (CBF) and consequently, hypoxia. Hyperbaric oxygen therapy (HBOT) is in clinical use for a wide range of medical conditions.

Furthermore, HBOT reduced amyloid burden by reducing the volume of pre-existing plaques and attenuating the formation of new ones. This was associated with changes in amyloid precursor protein processing, elevated degradation and clearance of Aß protein and improved behavior of 5XFAD mice. Hence, our findings are consistent with the effects of HBOT being mediated partially through a persistent structural change in blood vessels that reduces brain hypoxia.

Motivated by these findings, we exposed elderly patients with significant memory loss at baseline to HBOT and observed an increase in CBF and improvement in cognitive performances. This study demonstrates HBOT efficacy in hypoxia-related neurological conditions, particularly in AD and aging.