A new study found that an FDA-approved medication to treat HIV restored multiple brain abnormalities in a mouse model of a genetic form of dystonia.

Dystonia is a neurological movement disorder that causes muscles to contract involuntarily, leading to repetitive or twisting movements that limit independence and might also cause pain. The preclinical findings were featured on the cover of the Aug. 18 edition of the journal Science Translational Medicine.

Using drug screening, drug testing and imaging methods, researchers reported that ritonavir corrected abnormal protein features in the brain and had therapeutic effects in a mouse model of DYT1, restoring multiple brain abnormalities. DYT1 dystonia is an early-onset genetic form of the disorder. The mice received higher concentrations of the medication than humans are given for HIV treatment, so human clinical trials are needed to test dosage levels and safety, the researchers said, and to determine whether the same results are found in people.

“We hope that this study will provide a promising therapeutic target in DYT1 dystonia, which is desperately needed for patients suffering from this disorder and their families,” said co-author David Vaillancourt, Ph.D., chair of the department of applied physiology and kinesiology in the University of Florida College of Health & Human Performance and director of the neuroimaging laboratory at the Norman Fixel Institute for Neurological Diseases at UF Health. 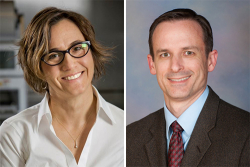 Vaillancourt analyzed MRI data for the research team, which was led by Nicole Calakos, M.D., Ph.D., a professor of neurobiology and neurology at Duke University. Calakos said she is encouraged that the MRI findings showed lasting correction in the mice after a brief treatment with ritonavir and hopes that the drug holds potential not just to address symptoms of dystonia but possibly treat the underlying cause.

“We were really struck by the range of DYT1 abnormalities that the drug was effective against. We think that this may indicate that the drug is acting close to the root cause,” Calakos said. “A critical next step will be to figure out how to get ritonavir into the brain at higher levels and then test whether it is safe for people in those concentrations.”

The study was supported by a grant from Tyler’s Hope for a Dystonia Cure, a Gainesville-based foundation dedicated to advancing DYT1 dystonia research and promoting awareness and education of the disorder.

“This work is a great example of researchers collaborating and breaking down some of the barriers that have historically impeded progress by being siloed,” said Rick Staab, co-founder of Tyler’s Hope for a Dystonia Cure. “This is an exciting breakthrough and although there are more steps to go, I believe these findings will prove to have a huge impact on our quest to provide better treatments and ultimately find a cure for this devastating disorder.”

Like Night and Day: Animal Studies May Not Translate to Humans Without Time Considerations