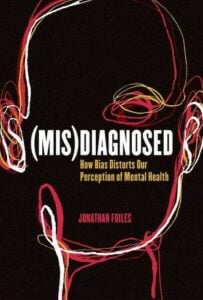 Who we are isn’t always how we’re seen by society. What we need isn’t always what we’re given. And when it comes to psychiatric diagnoses, how we’re labeled can be stained and shaped by prejudice—reflecting systemic cultural biases that ignore trauma, diminish populations, and invalidate their humanity and experience.

That’s the essence of (Mis)Diagnosed: How Bias Distorts Our Perception of Mental Health, Jonathan Foiles’ beautifully concise and breathtakingly persuasive look at psychiatric history through the lens of human rights. In straightforward, powerful language, he looks at the present in the context of the past, highlighting links between the outmoded, outrageously bigoted diagnoses of yore with the struggles of people in the system today.

People of color, poor people, gay people, trans people, people with developmental disabilities, women and others have been subject to discriminatory labeling and categorization—their identities cast as less-than, their experiences branded as illness. As the author repeatedly points out, our understanding of science in all its facets evolves over time. With it, our conception of the mind evolves; and with that, our ideas of disorder evolve, too. The problem lies in the cultural attitudes influencing our conceptions of all three—and while that’s obvious enough to those already questioning the current disease paradigm, Foiles has a gift for boiling it down in graspable lay terms with irrefutable logic.

Once again, they weren’t oppressed; they were delusional. That belief “both allowed whites to disregard anything that Black Americans might say, since it was evidence of their shattered thinking, and institutionalize those who did speak up or revolt. Label someone’s thoughts as delusional,” he says, “and you ensure that neither you nor anyone else have to take them seriously.”

So while drapetomania may be a relic, other prejudice-driven diagnoses and practices are not. Disparities in healthcare are not. The tendency to diagnose along racial lines is not.

Foiles uses this type of parallel vision—one eye on the past, one on the present—to unpack other biases in contemporary psychiatric treatment and their roots in longstanding social inequity. He looks at definitions and diagnoses of homosexuality over the years, including Richard von Krafft-Ebing’s late-19th century Psychopathia Sexualis—which declared it a form of degeneracy—and the inclusion of homosexuality as a mental disorder, until 1973, in the Diagnostic and Statistical Manual.

He looks at the experiences of women diagnosed with hysteria (“wandering womb”) in a previous era and borderline personality disorder in the current one, and all the patriarchal stereotypes of femininity (think Fatal Attraction) that pervade pop culture.

He looks, as well, at the history of post-traumatic stress disorder and its present criteria for diagnosis, which assumes “that one has a relatively stable and harmonious picture of the world that is shattered by a horrific event: a car crash, a sexual assault, the murder of a loved one. . . . They fail to fully capture the reality for those that never had such a rosy view of the world in the first place, however.”

Foiles, a therapist based in Chicago, last explored such topics in 2019’s This City is Killing Me: Community Trauma and Toxic Stress in Urban America. His views are rooted in his real-world interactions with people in distress, which informs both his grasp of history and his empathy for those ill-served by its impact.

Sprinkled throughout “(Mis)Diagnosed” are insights from sessions with his own clients over the years, who appear in small, humanizing snippets that bring a piece of his argument to life. He also pulls insights from medical diagnoses in general, using them to draw out problems with psychiatry’s narrow fixation on the person, not the community. Lung cancer, for instance: Public health campaigns discourage smoking on billboards in low-income areas. But what about the major polluters nearby? What about other carcinogens? In the same way, he argues, environments can be toxic for mental health.

“Growing up in a safe environment with adequate resources and without being discriminated against provides a strong buffer against mental anguish,” he states. “Yet we almost never frame mental illness in terms of the conditions of our society, preferring instead to focus upon the individual and, perhaps, their immediate family.”

In this and other sections of “(Mis)Diagnosed,” Foiles’ arguments unfold with an of-course obviousness: Of course diagnoses reflect the thinking, the “science,” the prejudices of the era that hatched them. Of course such thinking changes over time as our understanding morphs. Of course this implies that diagnoses are not ironclad and precise but squishy and inexact, mere shots in the dark at comprehending the human mind and all that shapes it.

“There is a certain amount of humility that is necessary here, a humility often lacking when it comes to the creation of the disordered,” he writes. “We felt quite certain that Black Americans had no real reasons to resist the various manifestations of white supremacy, so we determined that it was instead an expression of their paranoia. Women had no reason to complain and try to assert their voices against an often-hostile medical establishment, so they must just be hysterical. When we examine the history, these oversights leap out at us, yet we often fail to approach our current formulations with the same amount of skepticism.”

To be sure, his account isn’t exhaustive. Foiles doesn’t explore every avenue as fully as some might hope. In his diagnostic history of intellectual disabilities and the eugenics movement, he challenges our cultural obsession with IQ and questions our strict definitions of “intelligence”—calling, once again, for more inclusion. He notes that the DSM, while revising and righting some past wrongs, “does not go far enough.” But he also fails to ask why IDD is still included in the DSM at all. Why are developmentally disabled people diagnosed as mentally ill simply for existing? Why are so many of them prescribed antipsychotics? Questions, perhaps, for another book.

In the meantime, this one is plenty informative and plenty gripping—all the more so for its non-academic language and piercing brevity. If his rapid sweep through history and its ripples into the present miss a few points, he’s nevertheless looking with care and listening for voices too often ignored.

And listening, in his line of work, is everything.

That’s one of his problems with diagnosis, which “too often shapes how we listen to the person sitting in front of us.” Whatever they say winds up confirming however they’re labeled. And any given diagnosis, as he explains early on, “is just a series of words created by medical professionals to better communicate with one another.”

Sometimes people find comfort in such words, sometimes affirmation; quite often, they find pain. Either way, he says at the outset, “Perhaps it’s time to rethink the utility of those labels, or at least how we relate to them.”

Rather than reducing everyone to their symptoms, rather than overlooking all that happened in the course of their lives, rather than dismissing the role of poverty, prejudice, and systemic oppression in all its forms—rather than all of that, he asks, “What if it was possible to both acknowledge their suffering while also condemning the injustices and inequalities that have helped lead them here? That is the task that I have set for myself.”

Foiles states his case in the pages that follow, and it’s a convincing one. Let’s hope those with power start listening, too.