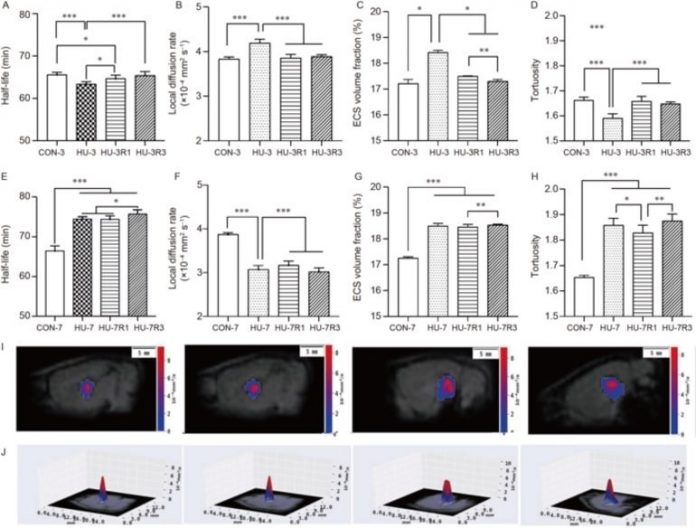 Although they have been investigated for the last decade, the mechanisms that underlie microgravity-induced neurological changes have not yet fully been elucidated. Upward fluid transfer following exposure to microgravity leads to certain adaptive changes in the brain parenchyma, cerebrospinal fluid (CSF), and blood vessels.

The brain extracellular space (ECS) contains brain interstitial fluid (ISF) and occupies 15%–20% of the living brain by volume. Since the brain ECS serves as an important intermediate station for material transfer among capillaries, neural cells, and CSF, the alterations to this space that occur following exposure to microgravity remain unclear.

In this study, the brain ECS and drainage of the ISF under simulated microgravity were investigated using a self-developed measuring instrument with Decs-mapping technique. Changes of ECS and substance transportation within were demonstrated at very early stage.

Drainage of ISF was accelerated at day 3 and slowed at day 7. There was no abnormal neuronal morphology detected by HE staining and TUNEL in the HU-3 group; the percentages of hyperchromatic nuclei and apoptotic neurons showed no difference from the CON-3 group. However, in the HU-7 group, the abnormal cell structure associated with an increase in the apoptosis of cells did not recover in the hippocampal CA1 region.

After the reloading process, the faster drainage at day 3 returned to the normal level, while the slow drainage at day 7 was irreversible. The brain ISF flows in the ECS and its drainage plays a significant role in maintaining local homeostasis for neuronal activities. Actually, ISF drainage is affected by both the local properties of the brain ECS and the drainage pathway.

These findings provided a new way to understand the mechanism underlying potential brain damage under microgravity, as well as a perspective from which we may be able to protect astronauts.

Both ISF drainage and ECS diffusion could be regulated by neurotransmitters released following neuronal activities.

Meanwhile, the exploration of mutual interactions between the neural networks, the brain ECS, and the vascular system is worthy of further investigation. Elucidating the ECS and ISF changes over a longer duration of simulated microgravity will contribute to the protection of astronauts in upcoming long-term manned space flights or moon landing missions.

The smooth transportation of substances through the brain extracellular space (ECS) is crucial to maintaining brain function; however, the way this occurs under simulated microgravity remains unclear. In this study, tracer-based magnetic resonance imaging (MRI) and DECS-mapping techniques were used to image the drainage of brain interstitial fluid (ISF) from the ECS of the hippocampus in a tail-suspended hindlimb-unloading rat model at day 3 (HU-3) and 7 (HU-7).

Our findings suggest that early changes to the hippocampal ECS and ISF drainage under simulated microgravity can be detected by tracer-based MRI, providing a new perspective for studying microgravity-induced nano-scale structure abnormities and developing neuroprotective approaches involving the brain ECS.