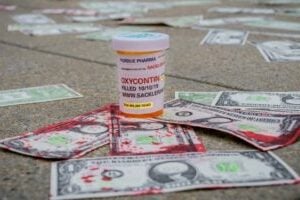 From Common Dreams: “In a bench ruling delivered over several hours on Wednesday, a U.S. judge approved a Purdue Pharma bankruptcy plan widely criticized for giving the Sackler family immunity from civil lawsuits related to the company’s drug OxyContin and and profiteering that critics say escalated the nation’s opioid epidemic.

‘The deal grants “releases” from liability for harm caused by OxyContin and other opioids to the Sacklers, hundreds of their associates, as well as their remaining empire of companies and trusts,’ NPR explained.

In a statement condemning the development, Rick Claypool, a research director for the consumer advocacy group Public Citizen, said that ‘allowing the billionaires at the root of the opioid crisis to walk free while thousands of its victims are in prison is a catastrophic injustice.’

‘Purdue Pharma is the reason the Sackler family are billionaires, and after today’s settlement they will remain billionaires,’ Claypool continued. ‘The greed of some Sacklers fueled an opioid epidemic that has killed more than 500,000 Americans, gripped millions in the claws of addiction, devastated communities across the country, and cost over $2.5 trillion.’

The researcher noted that ‘meanwhile, on any given day, 450,000 incarcerated people are serving time for nonviolent drug crimes.’”

A Tool to Fight off the Sadness of the Corona Crisis – Positive Psychology...