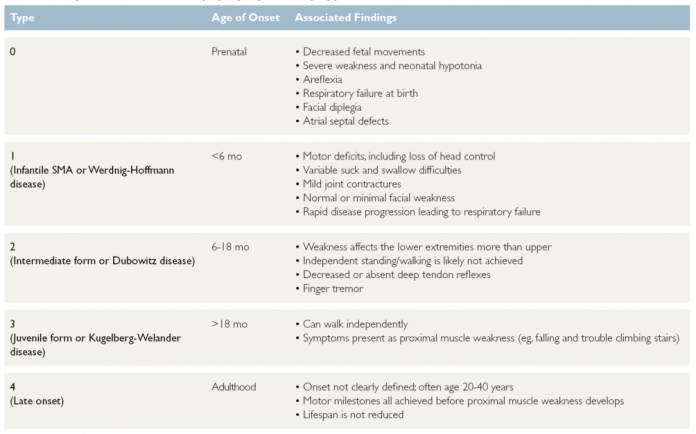 Spinal muscular atrophy (SMA) is a severe genetic condition that targets motor neurons in the central nervous system (CNS), resulting in progressive muscle atrophy, weakness, and paralysis.1,2 The condition affects 1 in 11,000 births but often eludes diagnosis based on clinical assessment findings.1 The availability of new treatments for SMA has changed the natural history of this disease. Early diagnosis and treatment of SMA can limit disease progression in children and adults, extending life expectancy and improving quality of life (QOL).

SMA is categorized into 5 types according to age at onset and maximum motor function achieved (Table 1).1,2 Type 0, the most severe form of SMA, begins in utero; after birth, babies have difficulty moving, swallowing, and breathing and survive days to months if they are not treated.2 Type 1, the most common form, is diagnosed during infancy and associated with the inability to sit unsupported by the expected developmental stage (age, 9 months).1,2 Type 2 includes children who can sit unsupported but are unable to walk.1,2 Type 3 includes patients who can walk during childhood but have weak motor function, and type 4 begins in adulthood in patients with no previously identified neurologic motor deficits.1,2

This disorder is most commonly caused by genetic deletions or mutations in the survival motor neuron 1 (SMN1) gene, causing it to produce low levels of SMN protein. The inheritance pattern is autosomal recessive, and carrier frequency ranges from 1 in 45 to 1 in 100 people.2 Asian ethnicity is associated with the highest carrier frequency (2.4%).1

Because of the high mortality of SMA types 0 and 1, as well as the QOL implications of all types of SMA, carrier screening should be considered across ethnicities.4

In SMA type 1, infants exhibit hypotonia of the extremities but demonstrate normal facial expressions.2 Cries often are weak and bulbar symptoms are present, leading to progressive feeding problems and aspiration.2 Infants with SMA type 1 presenting late in the disease process exhibit signs of respiratory distress and failure.2 Respiratory distress may be the presenting symptom in infants not seen for routine wellness exams.2

SMA type 2 has similar clinical diagnostic clues, but bulbar symptoms and respiratory concerns are not as profound as in SMA type 1.2 Infants fail to reach motor development milestones of pulling up and walking by age 15 months.2

In types 3 and 4, patient and parental history is key to diagnosis.2 Because patients can walk and function as expected until adolescence or adulthood, clinical symptoms of muscle weakening often are ignored or missed, leading to delayed diagnosis (see page 3, Delayed Diagnosis of SMA Type 3: A Case Study).2

Clinicians should be aware of the genetic prevalence of SMA and consider the condition in the differential diagnosis of new-onset muscular weakness (Table 2).2

From the July/August 2021 Issue of Neurology Advisor

Researchers Reduce Severity of Sleep Apnea by at Least 30%

Burning and Tingling in Your Feet? You May Have Small Fiber Neuropathy