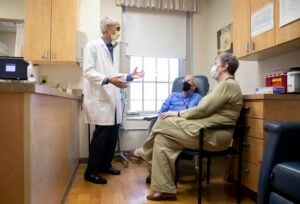 From The Baltimore Sun: “This month, the Food and Drug Administration changed the label for the recently approved Alzheimer’s treatment aducanumab — sold under the brand name ‘Aduhelm’ — to specify that the controversial drug made by U.S. biotech company Biogen should be used only by patients with mild dementia or mild cognitive impairment. This should be no bar to widespread use, however, as recent efforts indicate that Biogen may be trying to persuade adults who occasionally misplace their keys that they not only have Mild Cognitive Impairment (MCI), but that MCI is an early form of Alzheimer’s disease.

‘It’s Time We Know,’ a purportedly educational website on MCI, was launched by Biogen and Japanese drugmaker Eisai, which co-promotes aducanumab, in early May, about a month before the drug was approved. This website states that 1 in 12 Americans aged 50 years and older have noticeable symptoms of MCI and that MCI is most commonly due to Alzheimer’s disease.

A review of medical literature suggests neither statement is true, and Biogen failed to provide any supporting information when we asked for it . . . Convincing perfectly normal people they should see a specialist, be tested for amyloid plaque and, if present, assume they have early Alzheimer’s is a great strategy for increasing Aduhelm prescriptions; the worried well outnumber the actual sick, and younger patients can potentially use the drug for decades. Luring people into testing for amyloid and then convincing them that MCI plus plaque equals early Alzheimer’s disease could lead to millions of prescriptions — and billions of dollars in profit — for an ineffective and expensive drug.”

Why Do We Hate the Sound of Our Own Voices?