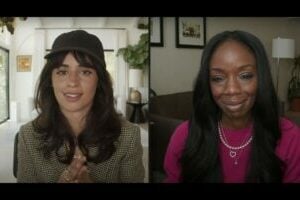 From Billboard: “Cabello took to Instagram on Friday (June 11) to tell fans about the conversation and how she originally found Dr. Burke Harris’ work. ‘A while back, I stumbled across an incredible TED Talk from the California Surgeon General, @nadineburkeharris, and it truly changed the way I thought about mental health and healing,’ Cabello wrote on Instagram. ‘I’m so excited for you all to listen to our conversation and learn about her groundbreaking work on Adverse Childhood Experiences (ACEs), how they affect us, and how we can begin to heal.’

. . . ‘Trauma is a public health crisis,’ Cabello says to Dr. Burke Harris after hearing about the increased probability of heart disease, diabetes, asthma and stroke, as well as a greater chance of depression, anxiety, and suicide, among those with childhood trauma. ‘We live in a society where we punish the wounded instead of treating them.’

The ‘Senorita’ singer opened up about her own journey to discovery when it comes to early trauma, recognizing that the overwhelming anxiety she felt in her late teens and early 20s was rooted in her childhood experiences. ‘Enough beating myself up,’ she realized. ‘I’m obviously not choosing this. But this means that whether it’s medication or therapy or yoga or meditation or whatever, I need to get proper treatment.’”

Immaturity of Microbiota and Epithelial Barriers Implicated in Neonatal Meningitis

The Importance of Alone Time For Mental Health