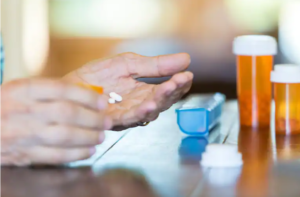 From The Washington Post: “In 2017, an estimated 94 percent of older adults received a prescription for a drug that increased their risk of falling, a startling increase from 57 percent in 1999, according to the research. The study also found that the rate of death caused by falls in older adults more than doubled during the same time period.

. . . Between 1999 and 2017, more than 7.8 billion fall-risk-increasing drug orders were filled by older adults in the United States, the majority for antihypertensives, which treat high blood pressure, the study says. The use of antidepressants also rose sharply, however, from 12 million prescriptions in 1999 to more than 52 million in 2017, according to the study.

. . . Every year, millions of Americans 65 and older — 1 out of 4 — suffer falls, which are the leading cause of fatal and nonfatal injuries in this age group, according to the CDC. Even a nonfatal fall can be serious, especially if it results in a fracture or head injury. Three million older Americans are treated in emergency rooms annually after falling, and 800,000 are hospitalized, the CDC says.

‘If you fall and break a hip, the statistic of your making it out of the hospital are not so good,’ Shaver says.

. . . Experts aren’t suggesting that physicians stop prescribing or — in the case of OTC products — stop recommending these drugs.”