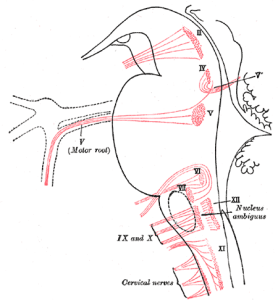 Nothing depicts the strange mix of beauty and complexity of the brain as the 12 pairs of cranial nerves. These nerves take off from the three sections of the brainstem, and control a wide variety of functions, from eye movements to facial expressions, from hearing to swallowing. These magnificent twelve turn and twist, loop and meander, as they find their way to their varied destinations. And they have such intriguing names such as the olfactory, the trigeminal, the vestibulochochlear, and the hypoglossal.

The twelve nerves innervate many vital structures, from the eyeballs to the inner ear, from the tongue to the vocal cords. Take the the 6th cranial nerve for example, probably the most fascinating of the twelve. Also called the abducens nerve, it has the longest intracranial course of all the cranial nerves. Although it travels such a long way, it surprisingly innervates only one of the six small muscles that move the eyeball, the lateral rectus. The long road it travels however makes it very vulnerable to all sorts of dangers; it can be compromised, directly and indirectly, by an unimaginably long list of culprits.

To address the diagnostic and management challenges of all the cranial nerves, Neurochecklists has stocked tens of comprehensive checklists. For a taster, here are just 30 checklists reflecting the wide spectrum of cranial nerve disorders.