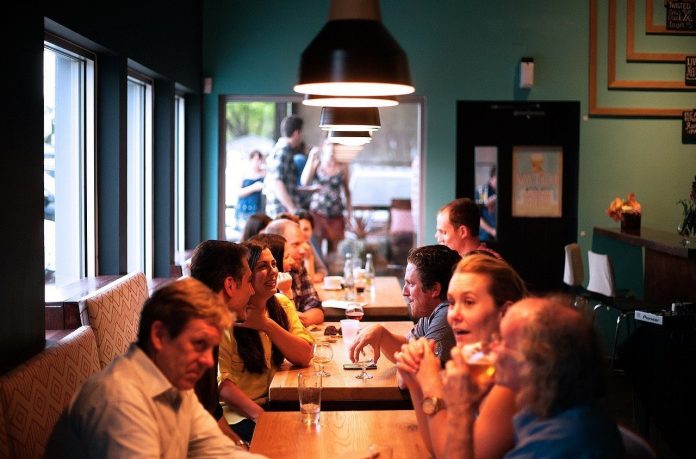 Summary: Due to social restrictions following the COVID lockdowns, people may need to brush up on their social skills of concentrating on conversations. A new study reveals people can train themselves to do this on their own.

During the pandemic, people around the world have spent their lives in unusually quiet places – often at home, isolated or bubbled with family or friends. As restrictions ease in North America and parts of Europe, and people are allowed to socialize again and go back to work, they’ll likely find themselves in much noisier places.

New research from Western University and University College London (UCL) suggests these same people may need to brush up on the social skill of concentrating on a conversation in the midst of all of the noise. The study also shows how people can train themselves to do this better.

“When we go into cafés, pubs and restaurants, we often hear the chatter of other conversations around us, which makes it more difficult to understand the person we’re trying to listen to,” said Emma Holmes, UCL senior research fellow and former postdoctoral fellow at Western’s Brain and Mind Institute.

“We may need to ask the person to repeat what they’ve said, or move to a quieter place, before we can understand what they’re saying,” said Holmes. “For older people and people with hearing loss, even a small amount of background noise can make it very difficult to understand what someone’s saying.”

Holmes explained that when hearing a familiar voice the listener is picking up on two kinds of information at the same time: knowing the identity of the person who’s speaking (for example, distinguishing whether the person you’re listening to is Bill or Ted) and understanding the conversation with them.

In previous research, Johnsrude and her collaborators found that the voices of friends and romantic partners were understood better than those of strangers, even when what was said was identical.

In the new study, published by Psychological Science, the neuroscientists compared the length of training with a new voice that is required for listeners to be able to identify the speaker by name, and how long it takes for that same voice to become more intelligible than others.

To achieve this, study participants were trained to recognize three different voices by listening to them with headphones in a quiet room at the Brain and Mind Institute (pre-pandemic). They were exposed to one voice for about 10 minutes, another for 20 minutes and a third for 60 minutes. They then listened to lots of different sentences from the three talkers, all mixed up. After each sentence they had to select the name of the person who spoke it.

After the training, the neuroscientists tested the intelligibility of the three voices heard during the training with two new, unfamiliar voices all amid background speech that mimicked the conditions of a restaurant or other public space.

“Voice training improved ability to recognize identity from a voice, and intelligibility of a voice, but over different time scales,” said Johnsrude.

Even 10 minutes with a voice was enough for listeners to accurately identify a person by name, nearly 100 percent of the time.

Outside a lab setting, people could train for voice recognition at home by using a phone or laptop with headphones, the researchers said.

Original Research: Closed access.
“How Long Does It Take for a Voice to Become Familiar? Speech Intelligibility and Voice Recognition Are Differentially Sensitive to Voice Training” by Emma Holmes et al. Psychological Science

How Long Does It Take for a Voice to Become Familiar? Speech Intelligibility and Voice Recognition Are Differentially Sensitive to Voice Training

When people listen to speech in noisy places, they can understand more words spoken by someone familiar, such as a friend or partner, than someone unfamiliar. Yet we know little about how voice familiarity develops over time. We exposed participants (N = 50) to three voices for different lengths of time (speaking 88, 166, or 478 sentences during familiarization and training).

The speech-intelligibility benefit for the most extensively heard voice (10%–15%) is as large as that reported for voices that are naturally very familiar (friends and spouses)—demonstrating that the intelligibility of a voice can be improved substantially after only an hour of training.

Living in Areas With More Greenery May Boost Cognitive Function