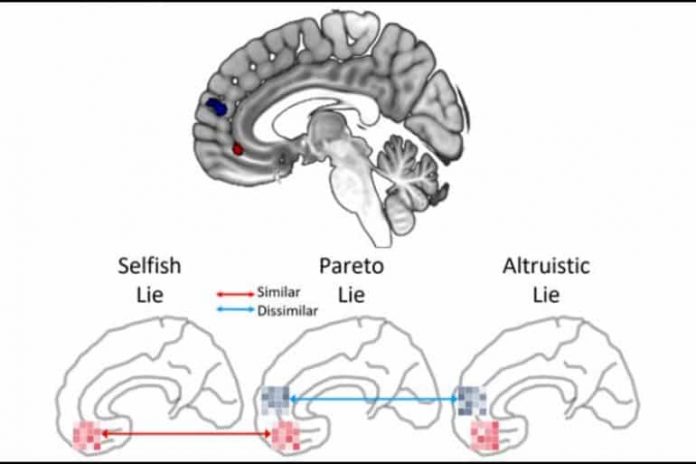 Summary: White lies that are selfish in nature elicit increased activity in both the ventral and rostral medial prefrontal cortex.

You may think a little white lie about a bad haircut is strictly for your friend’s benefit, but your brain activity says otherwise. Distinct activity patterns in the prefrontal cortex reveal when a white lie has selfish motives, according to new research published in Journal of Neuroscience.

White lies — formally called Pareto lies — can benefit both parties, but their true motives are encoded by the medial prefrontal cortex (MPFC). This brain region computes the value of different social behaviors, with some subregions focusing on internal motivations and others on external ones.

Kim and Kim predicted activity patterns in these subregions could elucidate the true motive behind white lies.

The research team deployed a stand in for white lies, having participants tell lies to earn a reward for themselves, for an unknown person, or for both.

The team used fMRI to measure the MPFC activity of participants and, by comparing the brain activity of white lies with the selfish and altruistic lies, they could predict the true motivation for the lies. Selfish white lies elicited greater activity in the ventral and rostral MPFC.

Identifying true motivation for Pareto lies, which are mutually beneficial for both the liar and others, can be challenging because different covert motivations can lead to identical overt behavior.

In this study, we adopted a brain-fingerprinting approach, combining both univariate and multivariate analyses to estimate individual measures of selfish motivation in Pareto lies by the degree of multivoxel neural representation in the medial prefrontal cortex (MPFC) for Pareto lies conforms with those for selfish vs. altruistic lies in human participants of either sex.

Our findings demonstrated that hidden selfish motivation in white lies can be revealed by neural representation in the MPFC.

True motivation for dishonesty serving both self and others cannot be accurately discerned from observed behaviors.

Here we showed that fMRI combining both univariate and multivariate analyses can be effectively used to reveal hidden selfish motivation of Pareto lies serving both self and others.

The present study suggests that selfish motivation for prosocial dishonesty is encoded primarily by increased activity of the ventromedial and the rostromedial prefrontal cortex, representing intuitive self-serving valuation and strategic switching of motivation depending on beneficiary of dishonesty, respectively.

Want to Throw off Your Chatbot? Use Figurative Language