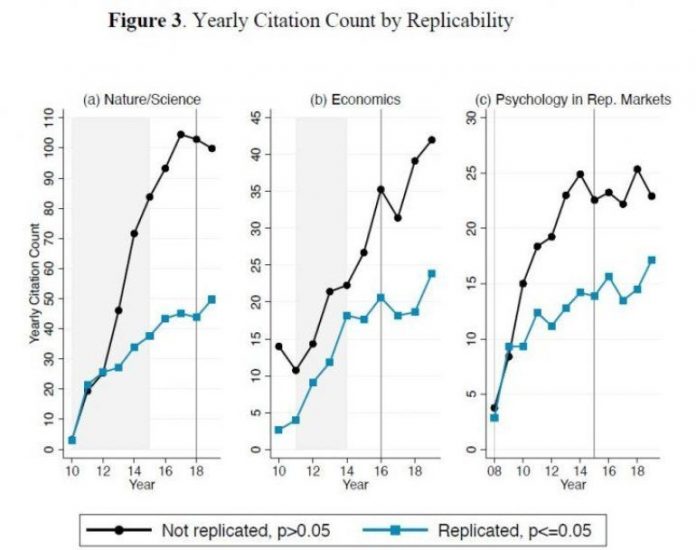 Summary: Researchers have uncovered another problem with a number of recent scientific research papers; citing data that is unable to be replicated. The study reveals non-replicable data is cited 153 times more because the findings they lay out are deemed more interesting.

Papers in leading psychology, economic and science journals that fail to replicate and therefore are less likely to be true are often the most cited papers in academic research, according to a new study by the University of California San Diego’s Rady School of Management.

Published in Science Advances, the paper explores the ongoing “replication crisis” in which researchers have discovered that many findings in the fields of social sciences and medicine don’t hold up when other researchers try to repeat the experiments.

The paper reveals that findings from studies that cannot be verified when the experiments are repeated have a bigger influence over time. The unreliable research tends to be cited as if the results were true long after the publication failed to replicate.

Their possible answer is that review teams of academic journals face a trade-off. When the results are more “interesting,” they apply lower standards regarding their reproducibility.

The link between interesting findings and nonreplicable research also can explain why it is cited at a much higher rate–the authors found that papers that successfully replicate are cited 153 times less than those that failed.

“Interesting or appealing findings are also covered more by media or shared on platforms like Twitter, generating a lot of attention, but that does not make them true,” Gneezy said.

With the findings from these three replication projects, the authors used Google Scholar to test whether papers that failed to replicate are cited significantly more often than those that were successfully replicated, both before and after the replication projects were published. The largest gap was in papers published in Nature/Science: non-replicable papers were cited 300 times more than replicable ones.

When the authors took into account several characteristics of the studies replicated–such as the number of authors, the rate of male authors, the details of the experiment (location, language and online implementation) and the field in which the paper was published–the relationship between replicability and citations was unchanged.

They also show the impact of such citations grows over time. Yearly citation counts reveal a pronounced gap between papers that replicated and those that did not. On average, papers that failed to replicate are cited 16 times more per year. This gap remains even after the replication project is published.

“Remarkably, only 12 percent of post-replication citations of non-replicable findings acknowledge the replication failure,” the authors write.

The influence of an inaccurate paper published in a prestigious journal can have repercussions for decades. For example, the study Andrew Wakefield published in The Lancet in 1998 turned tens of thousands of parents around the world against the measles, mumps and rubella vaccine because of an implied link between vaccinations and autism. The incorrect findings were retracted by The Lancet 12 years later, but the claims that autism is linked to vaccines continue.

The authors added that journals may feel pressure to publish interesting findings, and so do academics. For example, in promotion decisions, most academic institutions use citations as an important metric in the decision of whether to promote a faculty member.

This may be the source of the “replication crisis,” first discovered the early 2010s.

“We hope our research encourages readers to be cautious if they read something that is interesting and appealing,” Serra-Garcia said. “Whenever researchers cite work that is more interesting or has been cited a lot, we hope they will check if replication data is available and what those findings suggest.”

Gneezy added, “We care about the field and producing quality research and we want to it to be true.”

About this science research news

Nonreplicable publications are cited more than replicable ones

We use publicly available data to show that published papers in top psychology, economics, and general interest journals that fail to replicate are cited more than those that replicate.

This difference in citation does not change after the publication of the failure to replicate. Only 12% of postreplication citations of nonreplicable findings acknowledge the replication failure.

Existing evidence also shows that experts predict well which papers will be replicated. Given this prediction, why are nonreplicable papers accepted for publication in the first place? A possible answer is that the review team faces a trade-off.

When the results are more “interesting,” they apply lower standards regarding their reproducibility.