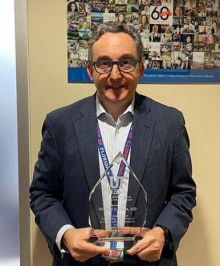 Michael Okun, MD was recently announced as the winner of the 2021 College of Medicine Clinical Science Research Award. Each year the college presents an award to a clinical science faculty member for outstanding achievement, productivity and research discovery.

Michael Okun, MD, an internationally recognized expert in movement disorders – particularly in the exploration of non-motor basal ganglia brain features – is the recipient of the 2021 College of Medicine Clinical Science Research Award. This award recognizes outstanding research that has a close connection to clinical medicine and/or a significant impact on the delivery of patient care. He is a professor and chair of the Department of Neurology and director of the Norman Fixel Institute for Neurological Diseases.

Dr. Okun received his MD with honors from the University of Florida and has been a faculty member at the college since 2002. He currently is a principal investigator on three NIH grants and several foundation grants exploring various aspects of deep brain stimulation and neuromodulation. His research publications include many high-impact papers that have deeply influenced and improved patient care and outcomes worldwide. Dr. Okun has been an integral part of some of the pioneering studies exploring the cognitive, behavioral and mood effects of brain stimulation and, since 2005, his laboratory has been working to uncover the electrical brain signals associated with human tic. He has also partnered with Drs. Ayse Gunduz and Kelly Foote to develop a first generation of closed loop adaptive deep brain stimulation approaches. Dr. Okun has served as the National Medical Director for the Parkinson’s Foundation since 2006 and was recognized in a 2015 White House ceremony by the Obama administration as a Champion of Change for Parkinson’s Disease. He was the founding principal investigator for the International Database and Public Registry for Tourette Deep Brain Stimulation. He and his group have contributed data to support the FDA approval of several device-related approaches now used to treat human disease.

Dr. Okun is also a published author, with his book of poetry, “Lessons from the Bedside” published in 1995. His book “Parkinson’s Treatment: 10 Secrets to a Happier Life” has been translated in over 20 languages.